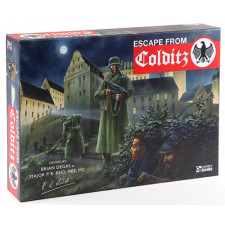 CT: Escape from Colditz is about as classic as they come. This 1973 design features Allied prisoners from different nationalities attempting to assemble equipment and bust out of Colditz Castle, an infamous Nazi prisoner of war camp during World War II. This game was devised by actual Colditz escaper Pat Reid, adding a touch of surreal history to the design.

MB: Well, let's qualify that a bit. It's a family game classic in the UK and Europe that never even got released in the US, as far as I know. It's a pretty well-known and fondly remembered game for those who value brands such as Worthington and Gibsons, but the US it has been mostly a footnote. Which is kind of a shame, because it was a game ahead of its time in a few ways including the WWII POW camp setting and the concept of one player controlling an adversary (the Nazi guards) while the others work together (the POWs). This may in fact be one of the earliest examples of a co-op or "one against many" game.

But more than that, it was also a very strong, very formative attempt to tell a specific narrative with simple mechanics. If you compare this game to other early 1970s games, it emerges as quite an anomaly. Even the work that folks like Charles Roberts or Sid Sackson were doing at that time isn't quite like anything Escape from Colditz attempted. I think that Pat Reid may have been one of the first game designers to really understand that a game can tell a very specific story in a very specific setting. 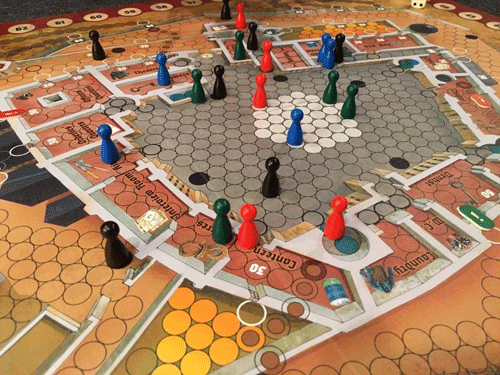 Ah, the days before every game had to have bubblegum machine figures.

CT: With that being said, this game is still a roll and move retaining the majority of those quirky and antiquated mechanisms.

MB: Well, and that is absolutely true. It is pretty archaic, and many modern gamers might be shocked at how loose- maybe even "under-designed" it is. I have heard very reasonable objections to it, especially the older editions where there wasn't even really an endgame condition. It's often branded as an "experience" game, and I think that undercuts some of the neat things about this vintage title.

CT: The 2016 version has been spruced up mightily by Osprey Games. In addition to an extraordinary packaging and graphical revision, the rules have been slightly tweaked to inject a touch of modern concept into the design.

MB: Yes, the new edition is lovely. I especially like that they've retained some of the cool novelty elements that were present in earlier editions, the replica Red Cross packages and the historical booklet, for example. The illustrations are excellent, which might expect coming from Osprey since they've made a business out of highly accurate, highly detailed military illustration. The whole thing feels deluxe, and I appreciate the respect and dignity with which they've treated this game.

CT: That notion of respect is front and center. From the foreword explaining why they only massaged the game slightly, to including the original rules in the back, this is all about getting this popular game back in print. Hats off to the entire team that worked on this one, it certainly feels like a deluxe effort. 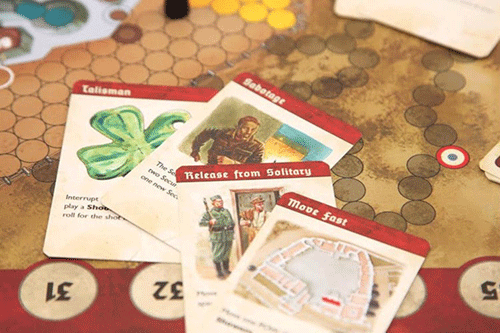 MB: As for the changes, they are minor but definitely for the better mainly because they sort of accelerate the pace of the game, making it easier to get an early POW escape which also makes the game play shorter and keeps it from overstaying its welcome- which may be about 20 minutes for some of today's game players.

CT: I think the big question here is whether this game is a worthwhile experience with current competition. The one thing this game really has going for it is the narrative it creates. It may not always run along smoothly or present you with feel-good options, but it does afford interesting outcomes and gives you something to marvel at as youâ€™re perched over the board.

MB: Right, it comes from a very different design school. One where there is a staff car printed on the board that the POWs can steal and escape in. But you may never see it in action over ten games. Or those "Do or Die" cards. But when you DO see one of those one out of a hundred game events, it's EPIC.

The interesting outcomes and strong narrative all come down to the detail, little things like the searchlight zones and how the Officers get called back to file a report when they catch a POW. It's really surprising how much detail is in the game given its vintage.

I have to agree that it is difficult to sell this game on crowds raised on modern design. Today, it feels like an outsider, marginal design despite its influence and innovation.

CT: Itâ€™s funny though because that outsider feel is what drew me into it. If youâ€™ve never experienced the original thereâ€™s a certain quality here that will stimulate your imagination and offer a unique experience. In addition to the excellent narratives it creates, the game really knows its drama. Youâ€™ll remember those moments when youâ€™re nailed with a rifle beyond the wire, or when youâ€™re scaling a wall and racing for the fence with guards in hot pursuit. It brings to mind excellent cinematic moments as if youâ€™re living out The Great Escape or Stalag 17. It makes you wonder why we havenâ€™t seen any other quality prison escape games.