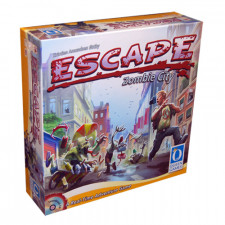 Not all games are for everyone, and in the case of Queen Games' follow up to the outstanding Escape: Curse of the Temple, it is probably only for very die-hard fans of the zombie genre. This game fails to capture virtually everything that made its predecessor great, primarily because it tries to add complexity while losing tension and offering a far less fun experience. There are some nifty things they've designed into the game, but Ielloâ€™s Zombie 15â€™ is a superior game in every meaningful way. Iâ€™m still very tepid on that title, but it does virtually the exact same things. But I am definitely not tepid on the first Escape game, which I love, and this follow-up disappoints in a major way. The only person Iâ€™ve played it with that liked it I think might have enjoyed it solely because it only takes 15 minutes to play and is easy to learn.

The concept of the game is that you and your friends play the role of survivors of the Zombie Apocalypse (TM) who start at a church, then go around exploring the city to find a certain amount of key items in order to get a getaway vehicle loaded with supplies. In other words, exactly the same things that almost every zombie game has done since designers started stumbling over themselves to recreate Romeroâ€™s Dawn of the Dead. To do this, you need to roll dice to move around the board and roll dice to kill zombies. You must do so under some constraints. The first is that there's a 15 minute soundtrack which snarls and growls at you to set the mood while also acting as a timer. The second is that you cannot allow three zombies to overrun the church. Fail either of those, and all players lose. The timer also has three five-minute sub-timers which force players to stop what they're doing and run back to the church, which is the only tension-building part of the game. There's also a sort of scenario system which makes each game a little bit different, but more than anything, they're not so much different scenarios as much as they are difficulty levels.

On paper, it sounds like it should work well and be at least as much fun as the million other zombie games that are currently in print. Sadly, it lacks almost all tension, and worse, it just feels very dull and repetitive. It's almost like they borrowed some mechanics from Escape: The Curse of the Temple, another from Dead of Winter, and another from Defenders of the Realm. Then they mashed it up into a thin soup that isn't nearly as much fun as any of its ingredients. Gameplay is where it fails, and the major problem is that the game has a sort of screenplay layout where there's several "acts", with the last one is being the most egregious offender.

The first act finds players running around, exploring the city with the hope that they can find the locations of items while also locating the map's exit as quickly as possible. Every time a new tile is explored, you have to draw cards to spawn zombies, so there's a bit of tension there, but it's not what I'd call nail-biting. The cards are pre-seeded based on the scenario, so you may end up with a tougher zombie pool, or perhaps just more zombies. This adds some quality-or-quantity variety, but as mentioned earlier, it's not so much about variable scenarios as it is about difficulty level.

The second act has players frantically trying to collect the items and bring them back to their base, one at a time, because quite obviously it's impossible for a person to carry a crowbar and a can of gasoline at the same time. The final act has players all trying to get back to base to get into the van, then escape from the city while being harried by a sea of the undead. As I said before, it doesn't do anything new, and the fun factor is mostly missing because there's just not a lot of tension. The only real tension is that you might have bad rolls which lock out your dice, leaving you unable to do anything until another player comes to your rescue. Even then, there's no real consequence because zombies don't really do anything other than stop your dice from being unlocked, or try to move toward the city center a' la Defenders of the Realm. So, being in a space that's overrun by zombies doesn't really do much, because you can just move off the space, or really, just sit there and wait for them to move, which happens fairly often both in the first and second acts because they are moved based on card draws.

The components are top notch, although I'm not a big fan of stand-up cardboard tokens, with really nice artwork and thick, durable tiles. The dice are engraved, which is always a nice feature, and the rules are simple and easy to understand, for the most part. From a production standpoint, there's nothing to complain about at all, and they even included a nice little cloth bag instead of asking players to use "an opaque container or coffee mug", like in the olden days. All in all, it's at very least a nice looking product but if you are interested in fast-playing, simplistic co-op there are plenty of better options out there that offer more tension, more variety and more fun.