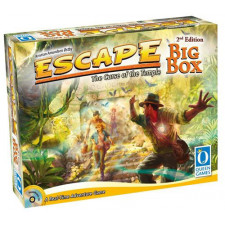 Escape: The Curse of the Temple - Big Box Review

Let's get one thing out of the way: this is a really big box. Too big, in fact. This colossal receptacle, sized to match Queen Games' other Big Box collections, houses an assortment of components small enough to fit into an average shoebox with room to spare. A handy, molded plastic insert thinks to the future, providing four deep wells to house tiles that barely fill two. In other words, Escape Big Box is capable of housing all conceivable future Escape releases, including the already-announced Traps expansion.

This surfeit of air should not, however, indicate that Escape Big Box is short on gameplay. Alongside the complete base game, this sucker contains a comprehensive collection of all Escape: The Curse of the Temple expansions and promos released up until 2014. Although, annoyingly for some, the Kickstarter campaign spawned a half-dozen new promos not included in the retail copy. In this chest of wonders, you'll find Escape: Illusions and Escape: Quests, plus the promos The Fountain, The Pit, and Doomed.

What does this all add up to? If you're contemplating the Big Box, I'll assume you're a total Escape novice, so let's start with an overview of the basic game. Escape is a real-time cooperative game, which means that one to six players will be frantically working together to complete the game's objective(s) while the clock ticks down to their doom. Escape brooks no concept of taking turnsâ€”it's your turn all the time until the final gong sounds.

Escape's accessibility sets it apart from other real-time co-ops. While Space Alert is thorny and thinky and XCOM is long and gamer-y, Escape is fantastically straightforward. Using a Yahtzee-inspired dice-rolling mechanic, players take on the roles of Indy-style treasure hunters trying to [insert game title here] from a collapsing temple.

As soon as the disembodied voice on the included CD soundtrack commands "ESCAPE," everyone starts simultaneously rolling and rerolling their engraved custom dice, ad infinitum, hoping to match the symbols required to complete various tasks, such as discover a new room tile, move to an adjacent room, or (most importantly) activate one of the magical gems needed to unlock the exit so that our heroes can do what it says on the box. The actual combinations required are printed right on the tiles themselves, so players never need to wrestle with the rulebook mid-gameâ€”remember, this is happening in 10 minutes of actual time to a soundtrack of increasingly frantic jungle drums.

Like most cooperative games, Escape throws up several roadblocks along the path to your otherwise simple goal. One face of every die shows a black mask, cursing the die in question. Cursed dice can't be rerolled except alongside another die showing a gold mask. Additionally, twice during the soundtrack, a gong will sound, indicating that all players have about thirty seconds to rush back to the starting tile. If they don't make it back before the door slams, they lose one precious die for the rest of the game, making it that much harder to complete their tasks.

So goes the basic game. One of Escape's greatest strengths, however, is its modularity, and in the Big Box, you'll find not one, not two, but six, count 'em six unique modules that can be mixed into the game individually or all at once. There's even a list of 26 Challenges, in ascending difficulty, at the back of the rulebook, providing a sort of achievements list to for dedicated Escape players to attempt.

The modules themselves include Curses, which strike when a player explores specific tiles and impose all sorts of goofy, often physical restrictions on play; Treasures, claimed from certain tiles by rolling two keys, which grant the players various onetime benefits; Illusion Chambers that disappear after each door slam, creating gaps in the temple layout; Quests, which give the players extra tasks to accomplish before escaping; Characters granting each player a unique special ability; and Special Chambers, a motley module described below.

Rather than providing a sweeping change to the game, the Special Chambers are simply unique rooms that add variety and spice to temple exploration. Split chambers let you activate gems, but only if you circle around to their rear entrance, while linked chambers force players to coordinate, completing the required tasks simultaneously on up to three separate tiles. You can lump the promotional tiles The Fountain and The Pit into this category, too. The Fountain offers players a onetime chance to retrieve dice lost to door slams or curses, while The Pit is inarguably the best tile in the boxâ€”it's a gem activation spot that requires five black masks to activate, leaving you totally locked up until another adventurer comes to your rescue.

Escape's overall feel shifts drastically alongside player count. A team of two adventurers must stick together at all times or risk frequent, frustrating lock-ups. In contrast, a five-player game requires that players split up to explore as quickly as possible, since they'll need to hit every gem activation tile in the basic setup before escape is even possible. The game supports solitaire play as well, giving the solo player two extra dice to compensate for the lack of allies. While this handicap was necessary to balance difficulty, the two extra dice severely increase the odds of achieving most tasks, so the solo player will quickly want to add in as many extra modules as possible to increase the difficulty and complexity of the experience.

And that's where Escape Big Box ultimately fails to live up to its titular indication of size. Its combined contents make for an excellent, variable game that will last dozens of plays, especially with larger groups, where the sheer chaos of the experience makes even the basic game feel fresh and exciting. However, it feels like just enough content, as opposed to the how will I ever get through all this vibe the Big Box name promises. The included Pit and Fountain promotional tiles only whet the appetite for the larger, more robust reserve of special tiles yet to come.

Enough about the Big Box that might have been. Misleading name aside, Escape Big Box certainly achieves its cost/value proposition. If you're new to the Escape experience, there's currently no better place to start.