Dystopias are rough. Thereâ€™s a lot of work, someone is usually yelling at you, and you can be punished for putting one toe out of line. However, thereâ€™s one group of people who tend to do well in a dystopia. From Brave New World to The Hunger Games there is always someone on top to benefit from and exploit the struggling masses. Euphoria: Build a Better Dystopia puts you in that role. In a clever twist on the genre, you arenâ€™t struggling to overthrow a dark government; youâ€™re here to exploit the workers and make the world betterâ€¦for you. 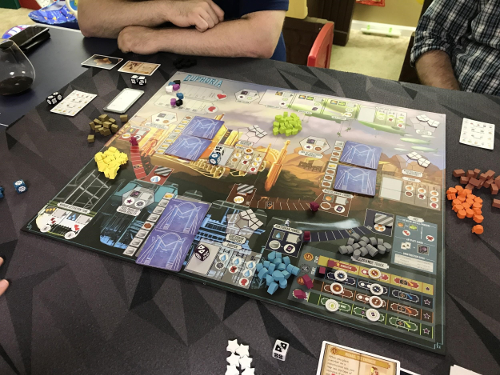 Set up and ready for exploitation

A lot of Euphoria echoes the monotony of a dystopia, but I donâ€™t mean that in a bad way. The game itself is an enjoyable worker placement exercise with a few clever twists. What I mean is that most games start similarly. Workers â€“ dice in this case â€“ are placed to gain commodities, which are used to gain resources, which are in turn turned into victory points. Youâ€™ve heard this before if youâ€™ve playedâ€¦any worker placement game ever. Like in dystopian fiction, itâ€™s when something or someone does something different that things start to get interesting.

Each die is a worker, and the workerâ€™s knowledge is represented by the value on the die. As you might expect, smart and intelligent workers are bad for dystopian middle management. If too many workers congregate in various spaces, the communal intelligence of your workers can start to creep up. If at any point the workers in your pool exceed a threshold, the smartest throws off the chains of his oppressor and runs away. Itâ€™s a lovely and clever mechanic that reinforces the setting while introducing an element of luck pushing. It can also be exploited mechanically by â€œbumpingâ€ an opponentâ€™s piece out of a space when theyâ€™ve just rolled high in their pool. 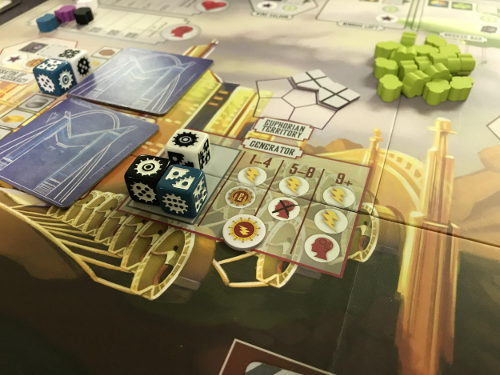 The total value of workers determines what you get. Smart workers yield more resources, but they get smarter.

The discovery of a few artifacts from the days before the dystopia might see you bribing them off for another recruit (and their special power). Or perhaps you roll doubles and suddenly your workers can work in tandem for a powerful turn that allows you to rapidly advance the construction of one of the markets. These little moments are what send peopleâ€™s strategies veering off on a number of different tracks and provide needed direction to this very sandbox-y game.

Victory points in this game are not abstract numbers on a track, but authority tokens that inject just a touch of Area Control mechanics into the proceedings. There are a number of ways to earn them and a number of places to put them, but not everyone can be everywhere so the steady pace of placing dice is punctuated with brief spurts of energy as you race to place a star down somewhere before being locked out. Having options so as to not be blocked out is nice, but it also makes parts of the game directionless. This issue is compounded a bit by having very few actions or spaces that can be denied to you.

Most worker placement games have some form of action denial at every level of the game. Euphoriaâ€™s denial is concentrated almost completely in the various area control mechanisms, and even in one of them you can mitigate it. Each game begins with a number of markets face down. These are constructed communally, with anyone who helps build it getting to place one of their authority tokens in the market. If you donâ€™t help, you gain an ongoing penalty. I really like this system as it gives direction to the resource conversion and gives players a compelling reason to trade. Markets have specific resource requirements to build them, so if Iâ€™ve got a bunch of stone and you want to get in on the â€œCenter for Reduced Literacyâ€ then I can use that stone to squeeze something out of you. 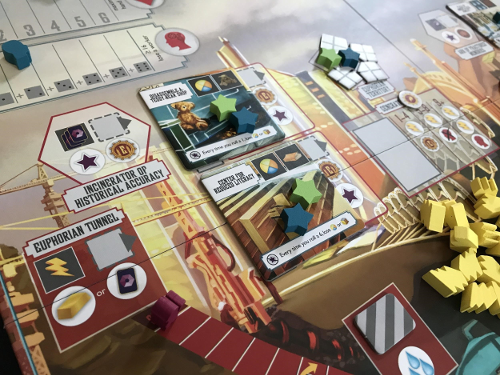 Unfortunately, it isnâ€™t all that difficult to add a star to the market later and eliminate that penalty. A few artifact cards is typically all you need and using them to place a star isnâ€™t exactly a bad thing since thatâ€™s what youâ€™re going to be doing with them anyway. The market building spaces are the only spaces on the board with hard denial, and the penalty is easily mitigated. Commodity generating spaces have no worker limits, and you can place in other spaces even if someone is there. They do get their worker back but thereâ€™s no real way to stop someone from doing what they want. At best you can delay, or get a small benefit of your own. This does lead to games where things are close at the end, but the cost is a game where itâ€™s extremely difficult to stop someone or catch up if you slip behind.

That isnâ€™t to say that I donâ€™t enjoy Euphoria, I like it quite a bit, itâ€™s just difficult to find a single hook or moment of tension that really grabs me. The tension is a subtle tension that comes from figuring out how to navigate the race to place stars, and not the knee-bouncing tension that can come from watching your carefully planned sequence of turns fall apart when someone takes your fish or whatever. Itâ€™s a meaty game made up of light components. Thereâ€™s luck pushing, but it's light. Thereâ€™s action denial, but itâ€™s very light. Thereâ€™s even some slight bluffing and social engineering, but itâ€™s light. It makes the game effortless to learn and play, but also doesnâ€™t make it jump off the shelf.