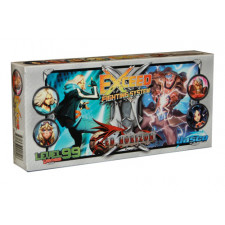 NO: Exceed is a fighting system game from Level 99 Games, but probably not the one youâ€™re thinking of. As in Level 99â€™s better-known BattleCON, in Exceed two players will face off against each other in a video game style brawl. Sixteen characters are spread across four sets, each with their own special moves and fighting styles. Thatâ€™s a lot of territory to explore, and Exceed does an excellent job of creating an approachable environment, or at least as much as is possible for this sort of game

Dan, I know youâ€™ve been playing Exceed for a lot longer than me, and you also have extensive experience with BattleCON. My previous fighting game experience is limited to the first edition of Yomi, the two-player fighter from David Sirlin. I think Exceed compares extremely well to that title, and from what I know of BattleCON, it seems like the new game is a better fit for me than the old one as well. My point is that I think it stands on its own without any previous knowledge of the genre, but how does it hold up for a more seasoned veteran?

DT: You know, I previewed Exceed a little over a year ago, and my first thought upon cracking open its wrapper was something along the lines of, â€œBattleCON? Is that you?â€ Not only do Exceed and BattleCON share their central conceits â€” theyâ€™re both card games about digital fighting games, is what I mean â€” but also a whole lot of terminology and even card layout. The way the action takes place on a linear surface, the way characters advance and leap over one anotherâ€¦ this definitely feels like an evolution. And if not a direct descendant, then certainly a parallel track.

The central difference is that BattleCON is a calculating, thinky sort of game. Itâ€™s very cerebral. And in a way, that slows it down enough that it can feel a little at odds with its subject matter. Exceed, on the other hand, is just so kinetic. In the same five minutes that we might spend deliberating our options in BattleCON, in Exceed weâ€™ll probably both take three moves. And for the most part, theyâ€™ll be splashy and exciting. Thereâ€™s hardly any downtime.

So does it hold up? Absolutely. Theyâ€™re different enough that Iâ€™m quite happy keeping both on my shelf, but Exceed is tremendously easy to get onto the table. I take it you agree?

NO: Yes I do. That is, itâ€™s as easy as I expect a fighting game with unique characters could ever be. There is still a little bit of learning curve in grasping how individual fighters function. They all have unique moves to master, and strengths and weaknesses to figure out. That means there will always be just a bit of a learning curve, and my first games of Exceed bore that out.

But there are a lot of smart design elements that keep the game moving even in those early stages. For one, half of the decks are made of cards that are common to all fighters, which makes it easier to internalize new characters. There also isnâ€™t much text or a bumper crop of keywords to learn, so new moves become familiar quickly. But more than that, the game makes it easy to get into the action. I always feel like Iâ€™m doing something or working toward my goals. One way it manages this is by lowering opportunity cost for big moves. They usually require gauge (which is generated by successful attacks), but not much of it, and they donâ€™t require a lot of specific cards to come up to make them work. Dan, what do you think makes Exceed such an immediate experience?

DT: Iâ€™ll put it this way: give me a good hand management game and Iâ€™m your huckleberry. Every decision matters because every card is valuable in so many ways. In fact, each one pulls quadruple duty. Perhaps most crucially, there are strikes, the moves that will slug your opponent or dodge out of harmâ€™s way. But there are also boosts, ongoing perks that help improve your strikes, or the ability to spend cards as â€œforceâ€ to move around or draw more cards. And every spent card represents lost stamina, so youâ€™re given all these flexible tools but encouraged to use them as efficiently as possible.

NO: Ooh, Iâ€™m a big fan of the Boost feature as well. They offer an option of less useful cards, which is nice from a decision-making standpoint. That kind of thing always has the potential to bog down choices in other games, but here the effects are more situational and easier to explain, so itâ€™s not a problem- just another way to accomplish what I want.

DT: And I love that. I love that I can do what I want with my cards. If Iâ€™m in a vulnerable spot, I can spend them to scoot out of range. If Iâ€™m working towards a particular strike, taking the time to prepare with some boosts can pay off big. Every moment feels fluid, always reacting to your opponent while building up your own moves at the same time.

But to prevent this from feeling like a cuddle puddle, is there anything that youâ€™d change about Exceed? Anything that doesnâ€™t quite work for you?

NO: Itâ€™s not something that I would personally change, but some players may balk at some of the streakiness, especially in regards to guard and stun. Many attacks have a stat called guard, meaning that if your opponentâ€™s attack hits first, you can absorb a certain amount of damage before you become stunned. Being stunned sucks because it essentially cancels your attack. This will drive some people crazy, because they might set up a very fast, very big attack that doesnâ€™t hit because their attack didnâ€™t have guard, and their opponent was just a little faster. This is an especially hard pill because the cards are still discarded, so you miss your opportunity. I am fine with this level of risk, but I can see it being somewhat frustrating for more cerebral players. The good part about this is that it allows someone who is behind to have a fighting chance still. Itâ€™s all about the hand management, as you say.

DT: I suppose I can see that. But if you canâ€™t take a punch, maybe donâ€™t play a fighting game?

NO: Besides that, I donâ€™t love the production on several levels. The foil cards are a neat idea, but in practice they are kind of weird to shuffle into your deck. The tuck-box packaging feels chintzy to me. The biggest knock here is the theming and illustrations. Since this version of Exceed is based on another game license called Red Horizon, they didnâ€™t have a lot of wiggle room here. But this stable of characters, aside from what they actually do in-game, leave me totally cold. It looks like generic anime, with all of the downsides implied. The illustrations are probably a bit too cheesecake for me too. Lots of male gaze went into the card art, so if thatâ€™s a problem for you Exceed might rub you the wrong way. I think this is a bigger problem on the character cards themselves (the ones that show where your characters are in relation to each other), rather than the attack cards.

From a business standpoint I kind of question Level 99â€™s business model here. I fear this game will have an uphill battle to distinguish itself from BattleCON. Those I know who have played both have attested to the difference, but itâ€™s not an obvious difference until youâ€™ve actually played it. That might hurt the gameâ€™s future. How about you?

DT: Other than the skeezy character art â€” which is a pretty considerable snag, honestly, and Iâ€™m of the mind that it could hurt the entire Exceed brand â€” I donâ€™t have much to complain about. I know some people donâ€™t like the wild swings, so maybe I should mention that. Basically, whenever somebody declares a strike, the game shifts from turn-based to simultaneous mode, with both players selecting their attacks at the same time. But if youâ€™re caught entirely unawares and nothing in your hand is worth using, you can draw a move at random from the top of your deck. Thatâ€™s a wild swing. And what makes these so cool â€” I mean controversial â€” is that you might actually hit your opponent with it. This, of course, represents a huge reversal of fortunes. Your guy might be the underdog, on the verge of suffering a beatdown, then totally do that cinematic snarlâ€™nâ€™lunge thing and turn the whole fightâ€™s momentum on its head. It makes for a thrilling, table-flipping moment, and itâ€™s just one more way that this is such a wonderful system.

NO: I didnâ€™t think about the Wild Swings as a downside, which may show how much I enjoy that mechanic. But I have seen a couple of games hinge on a wild swing that was improbably successful. I think thatâ€™s fun, but not everyone will.

DT: Okay, so I tried writing a downside and mostly wound up gushing about Exceed some more. That kind of sums up my thoughts on this game. Even most of its downsides are awesome.

NO: Same here. It is unexpectedly one of my favorite games of the year, and I expect it to be a strong contender in the two-player fighting game genre.