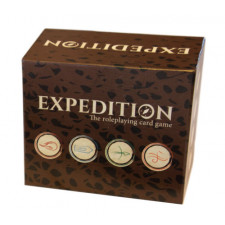 GM-less roleplaying is all the rage these days, as is speedy questing. Expedition: The Roleplaying Card Game sees these two bets and raises a companion app, going all in on the future of the lunch-hour RPG, resulting in a sizeable helping of success sprinkled with a few limitations from old and new sources.

Up to six players choose a variety of characters, draw from their available abilities, launch the app and choose a quest. The full spectrum of RPG roles are in the deck, from fighters and wizards to bards, diplomats and chefs, each playing like youâ€™d think they would. Melee, Ranged, Magic and Music decks form a characterâ€™s arsenal, and hit points are tracked on the characterâ€™s card with that most polarizing of gadgets: the plastic clip. If you hold the belief that games will someday be worth more than the paper theyâ€™re printed on, simply set it beside the card and forge ahead, dragonslayer. Start the app, tell it how many adventurers are in the party and choose a quest.

The game comes with four quests and a couple interesting tools for expanding your adventures: a community quest site and a combat generator for those who wish to craft their own story old-school and use the game to resolve conflicts. Quests are narrative texts with decision points, and all feature at least a couple branches, allowing for replay after their successful completion. Or after the partyâ€™s wiped out, thanks to another classic RPG lightning rod: 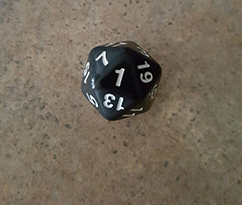 Not pictured: Pestilence, Famine and Trump

Yes, the d20 plays a pivotal role in Expedition. Disciples of Gary the Almighty have had their guts twisted by this little nephrolithiasis for two score years now, and it appears poised to deliver the opposite of help for decades to come. You can draw the right cards and RTS-poke the screen in plenty of time, and it can still go all pear-shaped. Over and over. Or not. Statisticians will tell you rolling a 20 is just as probable, but theyâ€™ve never chosen a battle-winning action, picked up the die and felt a tiny foreshadowing chill as it took a sliver of their soul before tumbling onto the table.

But enough about that. Letâ€™s get back to another aspect I glossed over in the last paragraph: the screen poke. Before each round of combat, all adventurers draw three cards from their ability deck, but donâ€™t look at them. Once one player starts the timer, each player has ten seconds to choose a card and hold their finger on the screen. When all party members have pressed their digit, the timer stops and they carry out their actions. If they donâ€™t choose before time runs out, the monsters deal extra damage, and I have to give Expeditionâ€™s creators credit here for devising the perfect way to enable cooperation without arbitrarily limiting communication. And itâ€™s perfectly thematic; if you debate your course of action in front of a giant spider long enough, itâ€™s going to eat your face.

After abilities are resolved, the monsters deal damage based on their collective toughness. Each monster has a tier, representing their relative danger to the party, and players tell the app the total tier level of remaining monsters before it decides how hard they hit the party. This mechanic allows the app to easily handle a variety of foes, with each monsterâ€™s cards detailing its life, special abilities and its surge ability, which the app will trigger every few rounds to hinder the party before they take their actions. Itâ€™s a smooth system that creates unique combat experiences without the need to continually reference tomes or charts. 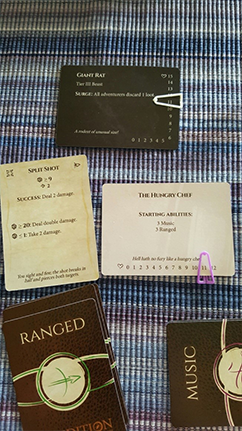 After a successful combat, the game rewards surviving party members with healing, bling from the Loot deck and a variation of leveling up when they choose to discard an ability to add a new one from one of their decks. Then, they pick â€œNextâ€ on the screen and continue their journey.

Expedition delivers a streamlined RPG experience that can last anywhere from ten minutes to an hour, depending on the chosen quest and the rolls of the die. Most of the quests included offer a second chance for a defeated party, but even when the chances run out, itâ€™s easy to start again. The narration isnâ€™t on the level with classic RPG modules, but thatâ€™s tweakable as well, if someone wants to play GM and spin a fantastic yarn in between combats.

Its other limitation puts it in the same neighborhood as other would-be D&D usurpers like Imperial Assault or Descent: every encounter is about combat, with no code or ability cards that allow adventurers to pick locks, charm royalty or do anything besides healing or harming. RPG veterans can overcome this with imagination, though, and for those willing to fill in the narrative blanks, Expedition: The Roleplaying Card Game offers a fast, streamlined fantasy quest experience thatâ€™s as short or as vast as you want it to be.