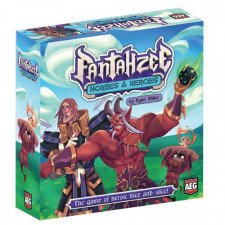 I am a complete sucker for set-making dice games, and so as soon as I saw Fantahzee: Hordes and Heroes was being released, I jumped on it. As it turns out, this is one of the better games Iâ€™ve played this year despite it being lighter family fare. Paired with the phenomenally fun Octo Dice, Alderac Entertainment Group has really taken over the light dice game market, as far as I can tell, and I couldnâ€™t be happier about it. Not only is it easy to set up and get to the table, its mix of a sort of tower defense system with set collection is something you donâ€™t see often, and that works surprisingly well. 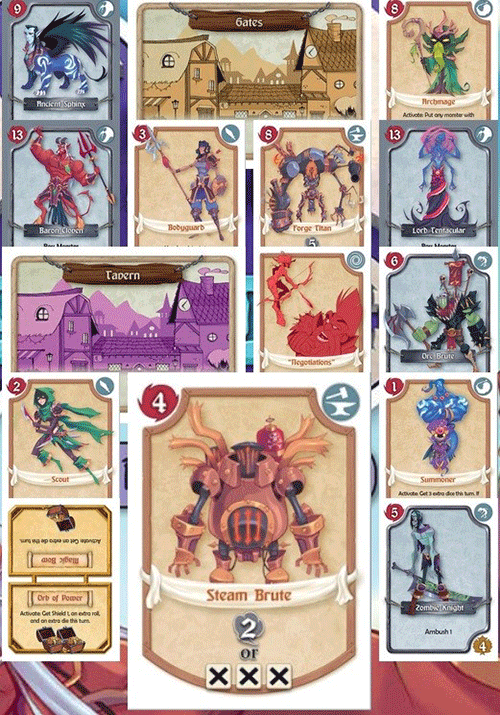 Fantahzee has a neat little setting where players represent heroes attempting to save a town from utter annihilation at the hands of a sea of Dirty McNasties, mostly of the green-skin variety. This is accomplished in a very streamlined set of phases which begins with playing and activating cards using sets of dice and culminates with a counterattack against your cards by the surviving monsters. Itâ€™s very simple, mechanically, but the gameplay is actually far deeper than Iâ€™d have guessed based on the rules alone. There are always options, some of which are very solidly in the push-your-luck category, which really fits the gameâ€™s theme well. What this does, without being too â€œgameyâ€, is create a nail-bitingly tense game that can force you into unfortunate corners based on how far youâ€™re willing to press your attack.

While dice-rolling is a major aspect of gameplay, thereâ€™s a lot more to it than that. What cards you choose to implement, and when, are another huge part of the game, as is which enemies to attack, when to reveal a new enemy, and when to simply lay low and bide your time are all integral parts of the overall experience. With five stacks of enemies to choose from, much of the tension revolves around deciding whether to wipe out the face up cards one by one or to delve deeper into a stack, revealing a new enemy, which may or may not be too much to handle. 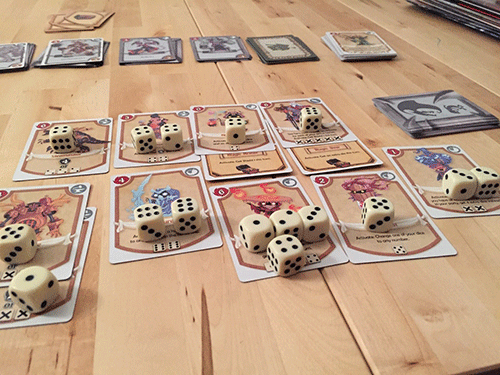 Near the bottom of each stack is a boss monster, and killing three of them is the over-arching goal of the game. Unfortunately for players, as you delve deeper into a stack, youâ€™re stuck attacking that stack with a diminishing amount of dice, and when you run out, or canâ€™t do anything else, any face up monsters retaliate for your impudence, potentially killing off your hero cards and making it harder to attack on the following turn. Itâ€™s actually very intuitive and makes a ton of thematic sense, which makes playing the game very simple and helps avoid a dreaded two-minute pause to look obscure crap up in the rules. I really like that the game doesnâ€™t overwhelm with bolted-on chrome rules; it is a light game and it doesnâ€™t try to be anything else. 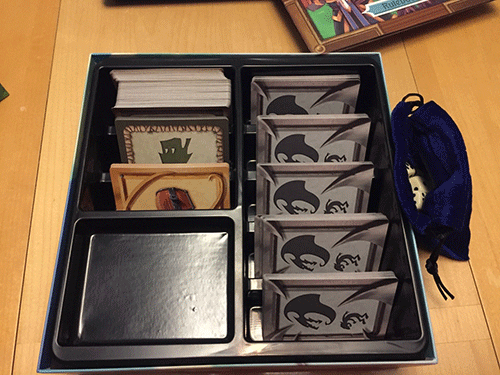 If thereâ€™s any complaint I could offer about the game, itâ€™s that the card distribution is such that youâ€™re going to be fighting the same cards with the same cards every time you play. Itâ€™s not a big deal since this game doesnâ€™t have any exploration or anything, but it would certainly be nice to have more variety in which monsters show up when you play. As it rests, the largest surprises come in the form of the hero/action card deck which you will most assuredly not be burning through in one game. Thereâ€™s not a ton of different heroes to use, but those that do exist are widely varying in what they can do and how they activate. Additionally, there is a treasure deck which provides you strong special abilities; despite there only being nine cards in the deck, when you kill a treasure-bearing monster, you may notice a tightening in your hindquarters as you pray that a useful treasure will appear. 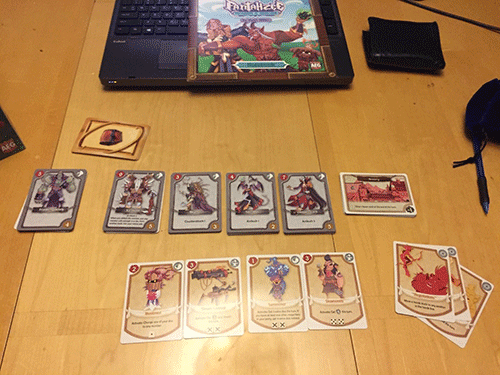 I really like this game, and Iâ€™ve played the hell out of it at this point. Itâ€™s a wonderful counterpoint to the overblown, very expensive games that have been clogging up my game shelf; itâ€™s inexpensive, well made, well-designed, and fun. Despite my mild disdain for the art direction, itâ€™s definitely the kind of game that I can see myself playing two or three years from now and still enjoying. I definitely recommend this to someone who likes dice games but doesnâ€™t just want a simply Yahtzee clone or Euro-In-Sheepâ€™s-Clothing.