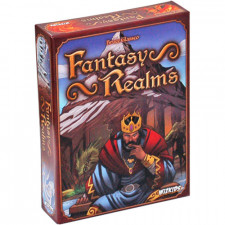 Thereâ€™s nothing about Fantasy Realms that should work. Its title is as generic as Costco toilet paper. Its graphic design looks like 1995 coughed up a hairball. Each of the 53 cards is unique and scoring them is so fiddly that there are multiple fan-made apps to aid in the process. This is a setup for a disaster of a game, yet Fantasy Realms defies every snap judgment you make.

Think of Fantasy Realms as a gamerâ€™s Rummy if youâ€™d like, but really, itâ€™s more than that. Youâ€™re dealt a starting hand of seven cards that you need to decide what to do with. Some cards are simple, like the Beastmaster whose base value is 9, but scores +9 for every Beast in your hand. Okay, cool. Time to collect some beasts. Are you sure you want to though? Thereâ€™s also Lighting in your hand, which gives you 11 points but +30 if you have Rainstorm. Oh, you have Rainstorm in your hand too? Even better. That gives you +10 for each Flood card, but blanks â€“ erasing base values, bonuses, and penalties â€“ all Flames that arenâ€™t Lightning. So now youâ€™re collecting Beasts, Floods, but not more Flames, but wait, the Forge is a flame that gives you points for Weapons and Artifacts and now your brain has twisted in on itself trying to map out all the possible combinations. This is the beauty and agony of Fantasy Realms and itâ€™s great. 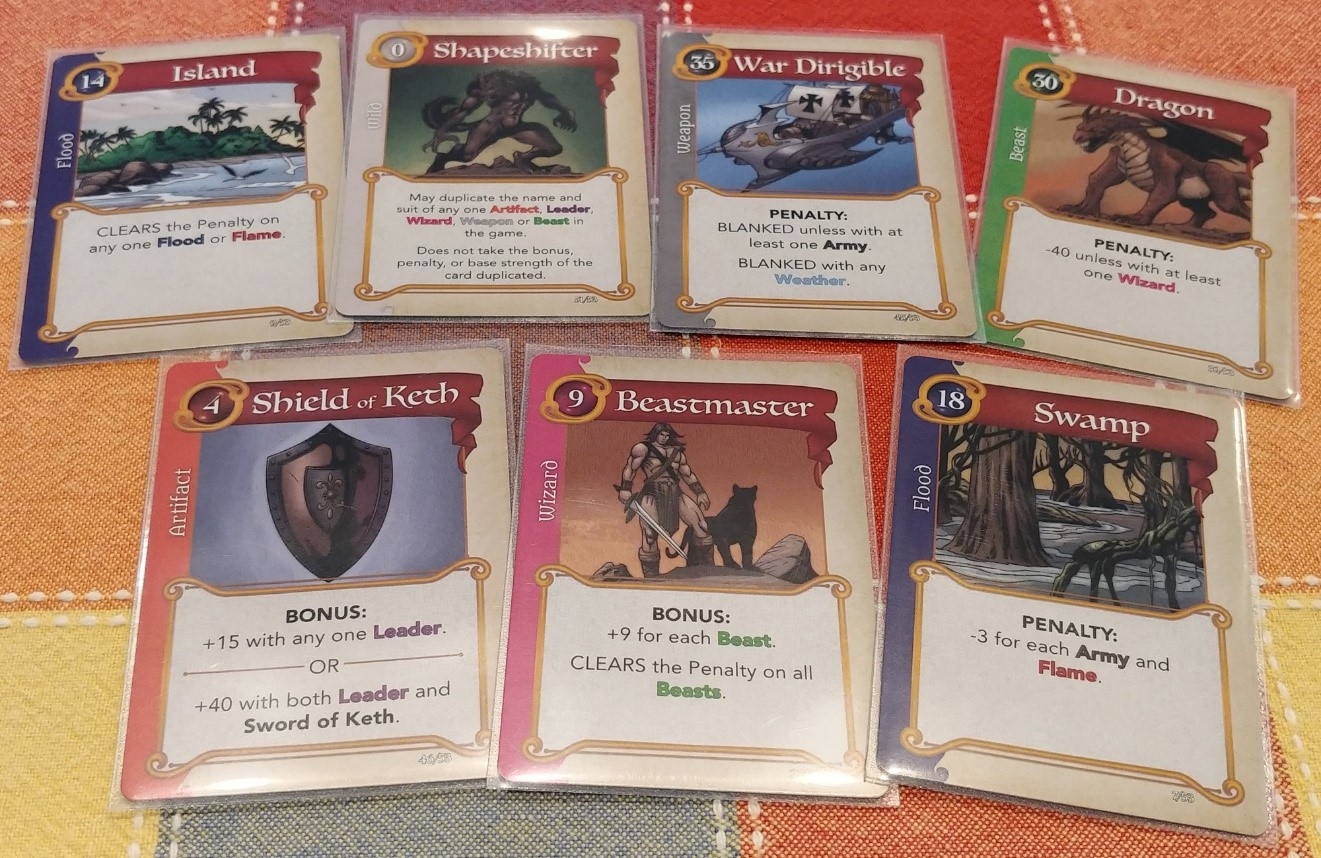 The simple choice of drawing a card from the top of the deck or choosing instead to grab one from the choices in the center is the entirety of the game. You swap cards in and out of your hand, trying to create the best 7-card interconnecting, trigger-happy set of cards you can. You could do this for rounds on end, min/maxing every choice presented to you, but Fantasy Realms isnâ€™t having any of that. Youâ€™re done when the discard area holds 10 cards and your now former friend just slammed the last card down. If only you could have just grabbed the Unicorn you needed for your Princess to ride off into victory with! So be it, jerkface. Letâ€™s do it again. And again. And probably again after that.

Fantasy Realms is fast. Like, 15 minutes fast. There is a lot of text to take in at first as you are figuring how all the different cards play off one another. After a few turns in though, your Spidey sense will start to tingle and your brain will be afire with the seemingly endless combos. Despite the discount Tolkien fantasy setting, the cards are surprisingly thematic, which helps you learn the deck pretty quickly. Smoke is blanked unless you have a Flame; the Magic Wand wants to be with a Wizard; and the King and Queen give bonuses for Armies, with even more if paired together. Youâ€™ll be shouting out exactly which cards you need before you even realize you memorized their names. 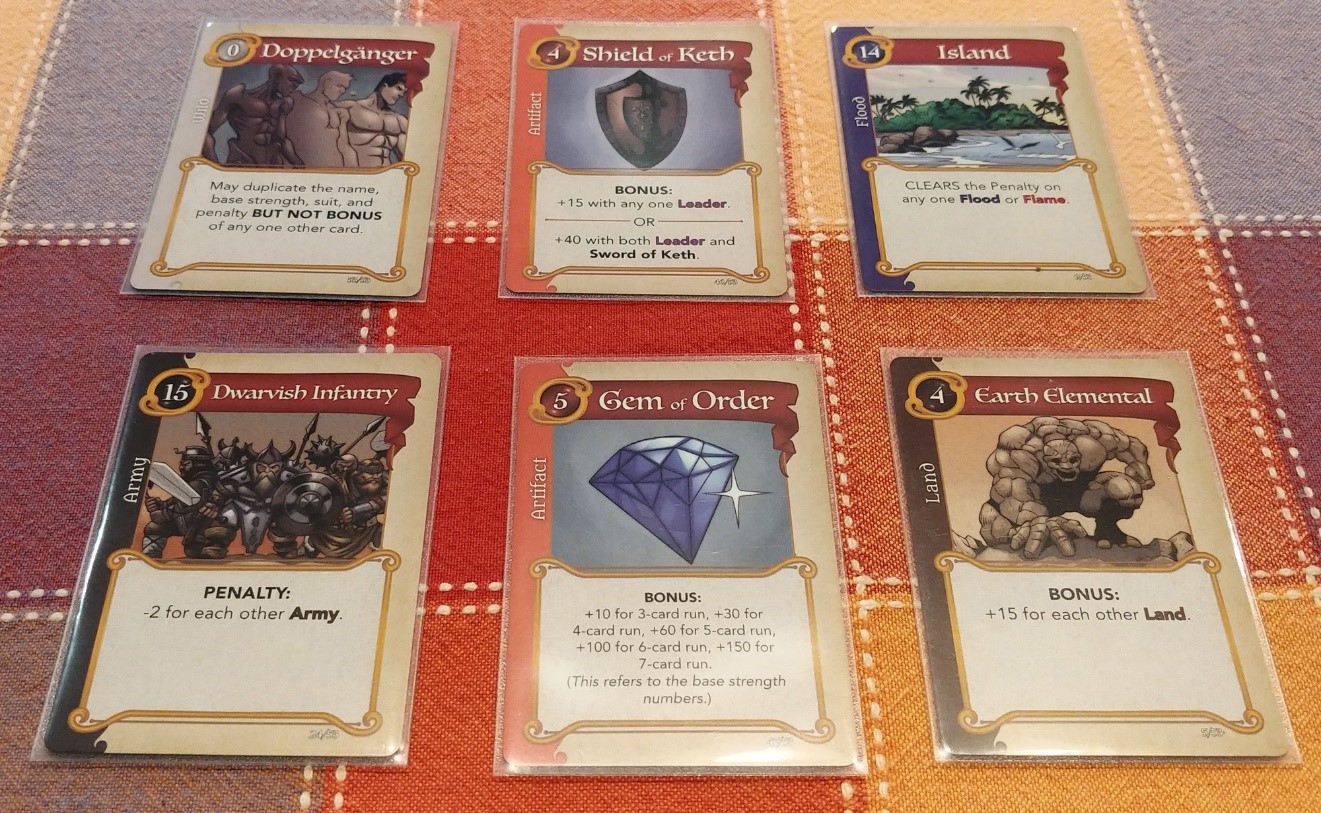 The draw-then-discard turn structure works just as well with two as it does with a bigger group. Of course, with more players thereâ€™s a greater likelihood that the Protection Rune that clears all penalties may not make its way back to you if it has to stay out for five turns. At the same time, youâ€™ll see more cards come out, so maybe you donâ€™t have to keep offering up your firstborn for that damn Candle to pop up and complete your Book of Changes, Bell Tower, and Wizard +100 combo. Yes, thatâ€™s a real bonus: 100 extra points for making that combo happen. 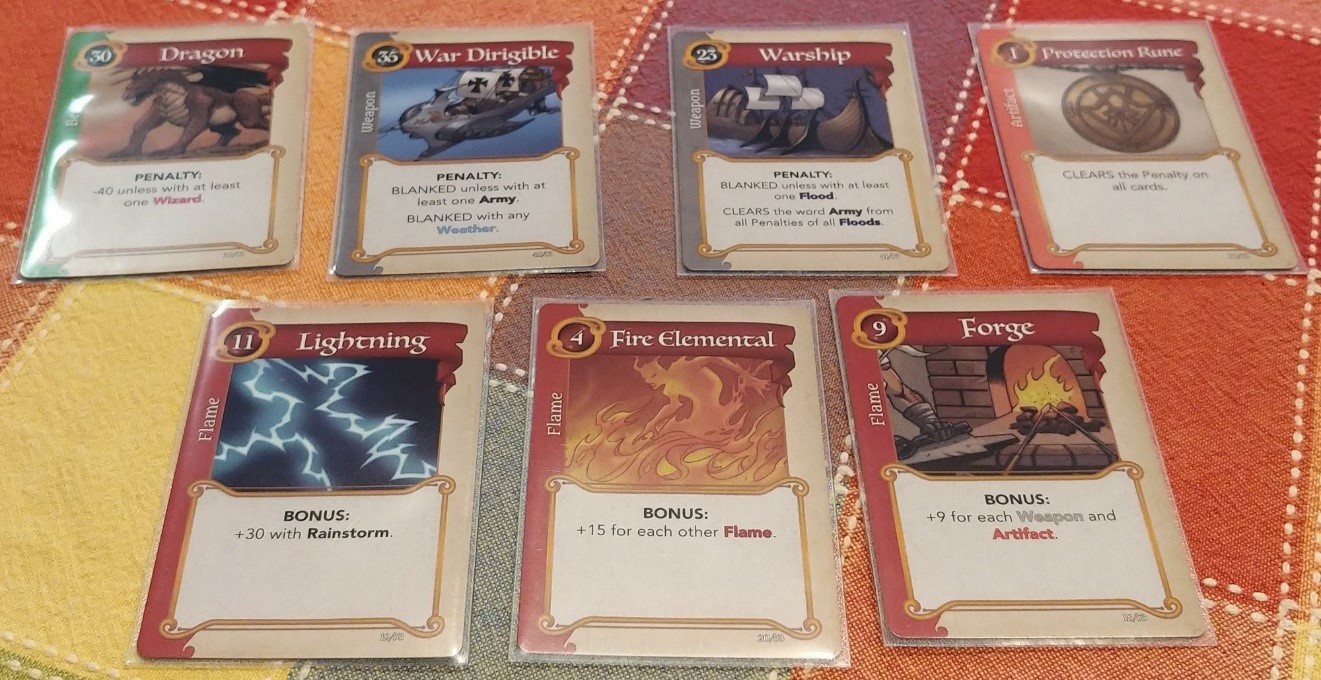 Hereâ€™s a 170-point hand, easily calculated by using fingers, toes, and a calculator.

Given these absurd numbers and all the interactions between cards, the task of scoring everyoneâ€™s hand of seven is arguably a longer process than the game itself. Thankfully, as I mentioned above, some kind souls have taken it upon themselves to provide scoring apps for the math-lazy. Scores are outlandish, with a ridiculous 290 sometimes beating a respectable 179. Some may balk at this points inflation, but I appreciate how Fantasy Realms spits in the face of micromanaging every single point fluctuation. Instead, you can focus on creating big, fun, and seemingly impossible combos. The game is more about seeing what you can pull off than it is about out-mathing your opponents. You just have to embrace this reckless abandon and know there is cleverness in the craziness.