Running on a very similar system to Among the Stars, Fields of Green is a drafting game all about building up your own farm in the 20th century. This engine building title offers an enjoyable combination of resource management, spatial elements, and a solid card draft.

The cards that you draft from round to round represent plots of land and there are four main types: Fields, Livestock, Buildings, and Constructions. In general, water is the easiest resource to come by. Fields tend to turn your water into wheat. Livestock turns that what into money. Buildings are expensive, but tend to provide a lot of victory points. Meanwhile, Constructions give your farm little bonuses or efficiencies.

Each round begins with the players drawing six cards from any combination of types. But after taking a look, they get to play only one to their farm. The remaining cards are passed to the next player. The card draft is the central mechanism of Fields of Green. Youâ€™ll need to look carefully at your neighbor to see what they need â€“ and then make sure that card isnâ€™t passed.

When playing a card, you can either add it to your farm or discard it for a number of effects. You could discard it for money, to build a Silo or Water Tower, or to restore a previously flipped plot. Then you pass the rest to your neighbor and do it all again. After all six cards are played, the harvest begins.

While some cards have an instant effect when added to your farm, most provide harvest abilities. At harvest time, you have to supply the correct goods. Generally, that means water to Fields and wheat to Livestock. If you canâ€™t or donâ€™t satisfy a harvest condition, that card flips over and becomes unusable until restored in a later round. After four rounds, final scoring determines the winner.

Fields of Green is remarkable for how many significant choices it gives the players. One of the more interesting aspects of the game is how it divides the cards into four piles based on type. So the players collectively determine what the make up of the round will be. If you grab heavy into Fields, then there will be more Fields floating from player to player. Even if you only get to play one card per turn, impacting that mix of cards can have a huge impact on the game. And, of course, the last player to draw cards effectively seals the deal on the mix. 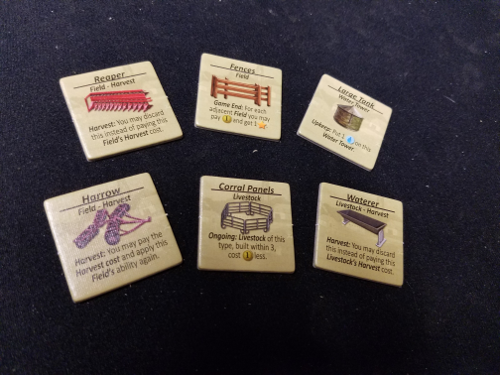 Resources are also handled well. Wheat is magic and will transport wherever you need it to go. But water is more precious. For abilities or harvest conditions that require water, it has to be taken from a water tower no more than two spaces away. This means that as your farm grows, youâ€™ll often need to add extra towers just to make sure you can continue to supply the necessary liquid.

The spatial puzzle of putting it all together is quite engaging. Often, a card will produce a better effect if it is near other specified cards. So it might produce more wheat if near a certain livestock or more money if near a Construction. A critical element in the game is getting those synergies to work while making room for needed water towers and grain silos.

Plus, every harvest presents its own special puzzle. Going into harvest time, you need to make sure that you have the raw materials â€“ that you will be producing them â€“ in order to effectuate all of your abilities. If you donâ€™t, not only do you lose that card to a flip, but it will cost you a later turn to revive it. Managing your harvests is a critical consideration as you grow your farm.

And when you layer the card draft on top, this title goes from good to great. It provides a solid system of interactivity into what is primarily a tableau building game. Itâ€™s also significant that there are so many ways to use a card. If a particular card would help your opponent, but not do much for you, you can always discard it for a new water tower, or to restore a flipped card, or simply for money. So the â€œhate draftâ€ is a real part of competitive play.

For those who have played and enjoyed Among the Stars, youâ€™ll find plenty to like here. The basic rules will be very familiar. But the split of cards into four piles and the introduction of a second resource really enhance the experience. So if you like Among the Stars, then this game is a no brainer. And if you havenâ€™t played its predecessor, then you should absolutely take a look at Fields of Green. Itâ€™s exciting, engaging, and provides that strange satisfaction that comes from starting with a simple farm and building a unique creation all your own. Itâ€™s like Among the Stars Plus. So unless you have a particular aversion to a farm theme, then this is the superior version.