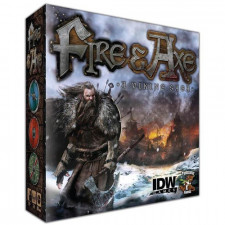 CT: 2015 was a strong year for Viking games. We saw Blood Rage, Champions of Midgard, and the re-release of the Ragnar Brothers classic â€“ Fire and Axe. This is a game that is relatively simple and streamlined, yet it does a fantastic job of offering a realistic take on the sailing, trading, and raiding of the Norsemen. It feels very distinct from those other releases and stands tall atop its own longship.

CC: This game surprised me. I flipped through the entire rule book and got concerned when I saw no evidence of PvP action. After all, whatâ€™s a Viking game without getting to fling your axe at somebody elseâ€™s face? But we decided to wade in anyway, and weâ€™re glad we did, because, as you mentioned, Fire and Axe is probably the most unique Viking game out there. Turns out there are plenty of opportunities for player interaction and the thwarting of your fellow Vikings, if youâ€™re clever enough to spot those opportunities. And it all begins with trip planning.

CT: Yeah, itâ€™s certainly a very dramatic game with, at the very least, players heavily invested in the path other players take. Youâ€™re jockeying for geographic position and racing to settle/raid/trade before other players, and youâ€™re also possibly competing for those Saga cards. It may not be as rough and tumble as Blood Rage, but the game does provide a number of ways to influence the other players.

The â€œweather groanâ€ was certainly a thing in our plays, where someone would play a Rune card and change the weather to thwart an opponent. Much of the interaction here isnâ€™t about wrecking each other, but more about putting a thorn in the side of an opponent or twisting the knife slowly. Forcing them to rethink their plans and adapt.

CC: Thatâ€™s the magic of this game: weather, Rune cards and Saga scoring provide a level of strategy beyond the typical Euro â€œI got to this space before you didâ€ mechanism and really affect gameplay. Plus, awarding the Saga card to the player who completes it, regardless of who did the majority of the work, is both a simple scoring mechanic and something that struck me as very Viking-like, combining aggression and deception if your opponentâ€™s not paying attention.

The opposite of this simplicity, however, is endgame scoring- it is probably my only knock on the game because of the time it takes and the disconnect we felt between Saga planning and scoring. In the games we played most decisions were based on which Saga could be completed before opponents got to it, but the scoring of Sagas based on Homeland majority resulted in major leadership changes at the end.

CT: I didnâ€™t have a big problem with the end game scoring really. The design offers multiple paths to victory through Trading, Raiding, and Settling before you even account for the achievement-like Saga cards. Counting up the points for settling different areas on the map and figuring out who has the majority of Saga cards for a homeland can be a bit tedious, but it allows for an opportunity for a swingy reversal where it doesnâ€™t appear like you have accomplished much in terms of focused strategy but can pull victory from the mouth of a dragon. I also think itâ€™s interesting that you can completely ignore any individual scoring parameter â€“ including Saga cards â€“ and still pull off a rousing triumph.

That sense of dramatic reversal is featured throughout the design. The game overall is definitely a Euro-style title but it features a prominent use of dice in crucial moments of gameplay. This can definitely rub people the wrong way if the odds donâ€™t fall in their favor.

CC: The chance cube can put a kink in the best-laid Viking plans, for sure, but I like the mitigation methods Fire and Axe employs, from the different settlement strengths to the idea that trading with a location before attempting to conquer it makes its citizens more likely to let your ship in the harbor without a fight. The game introduces a necessary element of uncertainty in a thematic way, adding to its depth and historical sense. Much like your opponents changing weather conditions on you or stealing a Saga out from under your nose, the die roll offers another element to test how well players react to adversity and separate legendary Vikings from also-rans.

The multiple paths to victory you mentioned, the sprawling map and careful planning required to successfully navigate it make Fire and Axe not only a good â€œViking Euroâ€ but perhaps the closest weâ€™ve come to an open-world game of adventure and conquest in this genre. While endgame scoring can drag on a bit for my taste, the legends players can create getting there makes it a worthwhile experience.