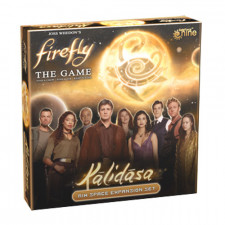 I really liked Gale Force 9â€™s Firefly board game- so much that it actually made me go back and revisit a TV show that I never really cared much about. And it even helped me to appreciate it more. Itâ€™s been a big success for GF9 and of course theyâ€™ve released several quite good expansions for it, making it arguably the most complete and comprehensive expression of the Firefly setting. Iâ€™m surprised that they keep getting game content out of just 14 episodes, but here we are looking at the new Kalidasa expansion. But looking at the game with all of the expansions folded in, Iâ€™m starting to wonder if the game is heading down that Arkham Horror path of over-expanding into bloat.

The new box offers plenty of new content, thatâ€™s for sure. You get another add-on map that attaches to the right side of the board, depicting the Kalidasa region. In general, itâ€™s an area safer from Alliance or Reaper interference, but alert tokens can pile up on areas and suddenly you might be dealing with an unexpected incursion. There are new Nav Cards for Rim and Border space to accommodate some of the new content.

The main outpost in this area is a sort of port town planet called Beaumonde- home of the notorious Fanty and Mingo, who are ready to hire players out to do lots of illicit things including jobs that have dual types (such as both smuggling and shipping) and other tasks that offer bonuses on the side if you complete during the work. Beaumonde, of course, offers a whole new stack of gear cards including fun stuff like Malâ€™s Sniper Rifle and Zoeâ€™s Mare Leg Rifle.

The other new contact is the clay magnate Magistrate Higgins, and I particularly like that there are new crew cards billed as â€œMuddersâ€ that you can hand over to him so he can take them on as indentured servants in his ceramics enterprise. Itâ€™s immoral, but hey, it pays. And Higgins wonâ€™t deal with you at all if you have Jayne Cobb in your crew. The new Captain, Captain Wright, also adds a nasty bit of business- heâ€™s a â€œdirty slaverâ€, after all.

The Operative is a major addition, adding a new automated ship to the board that can hunt. The Operative was an interesting character on the show (played by Chiwetel Ejiofor), an Alliance bounty hunter that shows up to capture River Tam. In the game, he functions sort of like the Alliance Cruiser but he can travel outside of Alliance space. Yikes!

New story and setup cards offer some new twists and ensure that youâ€™ll be using the new content and mechanics, but they are really kind of in the same vein as what has come before. That said, I really like the timing mechanics on the new ones. â€œWellâ€™s Run Dryâ€ dramatically limits the amount of money in the bank. When it runs out, thatâ€™s it. â€œItâ€™s All In Who You Knowâ€ puts the game on a three times the number of players round limit, with the player who has the most contracts when the â€œclosedâ€ sign is lit winning the game. Thereâ€™s also a story card that creatively presents the objectives as a scavenger huntâ€¦in verse. So to win, you need to round up - â€œa job most dirtyâ€, â€œa shipmate full of complaintâ€ â€œa temptressâ€ and â€œa saintâ€. Itâ€™s cute.

There are some other new things like nested skill checks that sometimes provide an â€œif-thenâ€ logic for working your way through a check, and as usually they supplement the larger narrative. And of course there are new cards for pretty much every deck in the game. More is good, right?

However, a lot of the material and the approach here in this expansion feel somewhat repetitive with Blue Sun. Which is fine, because that was a good expansion, but itâ€™s hard to avoid the feeling that this game is reaching the limit of how much it can- and should- add. Of the main expansion material, Pirates and Bounty Hunters was essential. Blue Sun was a â€œnice to haveâ€. Kalidasa in some ways fleshes out the game more and is sure to provide big damn fans of the game with plenty to enjoy, so I would recommend this addition only for those who have exhausted the prior content and of course the Browncoats.