MB: Alright Raf- opening salvo, brace for impact. Fireteam: Zero is one of the blandest, least inspired and derivative games I have played yet this year. I like almost nothing about this title and there is virtually nothing compelling about it. I think the Hellboy-meets-Resident Evil setting is dull, the miniatures are ugly and the illustrations look like mud. Iâ€™m trying to figure out what this dreadful game has to offer, what its raison dâ€™etre is. The only things I can come up with, the only things that really sets it apart from the competition is that it is simple, easy and it doesnâ€™t take long to set up and play. So essentially, all Fireteam: Zero has to offer is that itâ€™s dumb and short. I canâ€™t say that those are particularly convincing arguments for a game that is retailing at $100.

RC: You hit on exactly why I like it. Itâ€™s simple, easy and it doesnâ€™t take long to set up and play. Itâ€™s the beer-and-pretzels version of a dungeoncrawler. I can take a squad of new players halfway through a mission of Fireteam Zero before you could reteach me how to play Descent. I havenâ€™t played a game in this style that got up and running so quickly; Iâ€™ve already played it more times than the similarly priced Imperial Assault. 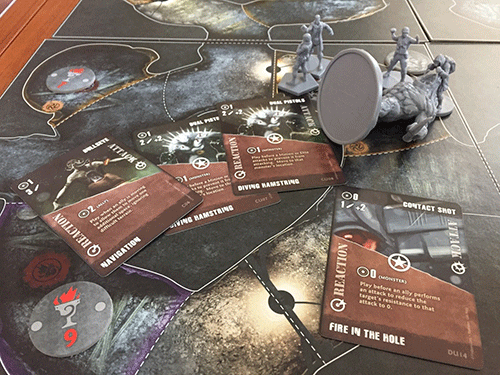 MB: Donâ€™t get me wrong here, that accessibility is definitely an asset. And I donâ€™t think that it is a complete failure by any means and there likely is an audience for it. It is a perfectly serviceable, working dungeoncrawler. But there are lots of perfectly serviceable, working dungeoncrawlers. So this game needs to make a case for itself not only to earn a place on my table but also out in the marketplace where it is in competition with everything from the Dungeons and Dragons Adventure System titles to Kingdom Death: Monster. And some of these games- like D&DAS, Claustrophobia, or even Dungeonquest are arguably just as approachable and easy to get into as Fireteam Zero. I think what you are responding to is actually more the pacing of the game, which ramps up with the shooting and such almost right away and it maintains a constant pressure throughout.

RC: Youâ€™re into the action immediately and keeps it ramped up the whole time. Sure, the systems arenâ€™t as complex as the other games you mentioned but whatâ€™s here works pretty well. It trips up on movement but I like the feeling of all the monsters on the map at all times. It forces you to figure out how to survive this round with these cards while working your way through each scenario. I can see where you wouldnâ€™t like the setting, but I dig the Weird War 2 â€œEmergent Earthâ€ world and think itâ€™s crossed over from the novels pretty well. I think the cost reflects the pile of miniatures and chunky components. Admittedly, $100 is a lot for something Iâ€™m describing as â€œbeer-and-pretzelsâ€ but itâ€™s tough to knock the quality of everything in the box. It even comes with a soundtrack.

MB: Donâ€™t get me started on that â€“ publishers, CD soundtracks are lame. Full stop. Iâ€™m also not a fan of crossover novels, but you are proof that there is an audience for them. But more to the point, letâ€™s dig into this â€œall monsters on the mapâ€ business. It sounds good on paper because there is constantly a threat somewhere and a big part of the game is navigating the choices to shoot, move, stick together or search the recon deck for the objective cards (a mechanic I despise, by the way) in the face of the constant respawns. But what happens, especially since the monster types are so limited per mission, is that the game quickly becomes repetitive and even annoying. It seems fun that you can shoot your way out of a situation and the random spawns wind up making a WORSE scenario for the team, but it turns out that itâ€™s not.

RC: While the monsters are the same every turn, your cards arenâ€™t. That interplay of reactions starts to become very important as the Twist Track makes the enemies stronger and you start facing elites and bosses. There were many times where we found ourselves wishing weâ€™d saved a Hamstring or tried to dig through a deck to cycle certain abilities back around. Itâ€™s risky to overkill when your card are your health but if it brings back useful cards faster, it might be worth it. All the dynamic decisions are focused on the players and the unit creating a threat both foreign and familiar. Itâ€™s all about sticking with your squad as you carve out a safe space amidst the horrors.

MB: Speaking of sticking together, is there any reason that youâ€™ve seen that players should bother with splitting up? Because of how the cooperative effects of the action cards work it seems to me that there is never a good reason to divide the team.

RC: No and itâ€™s definitely a letdown. Yeah itâ€™s about a unit, but it simplifies it a little too much. Iâ€™ve seen the squad split up twice. Once was just to go both ways around an island and they reunited two turns later. The other felt tactical: we sent our marksman to grab a spawn point behind us while we moved forward. Unfortunately, because of the disappointing map layout he spent almost two thirds of the rest of the game fluttering behind us. He was always one turn in our wake.

MB: Thatâ€™s about what Iâ€™ve seenâ€¦the straggler winds up getting KOâ€™d more often than not if you fall out of range of the NPCs or the support effects of the cards. And there is rarely, if any, opportunity for maneuver or tactical positioning, even with the few â€œcoverâ€ terrain tiles. Itâ€™s an example of how the oversimplifications of movement and geography have shut down any chances for interesting gameplay.

RC: The movement rules and the map layouts are fine independently, but together they fall flat. It results in your elite squad only moving one space forward the vast majority of the time. It works to pace the game through that Twist Track. It also gives the feeling that your characters are on rails like an old arcade cabinet light gun game. Move forward. Kill bad guys. Search. Move forward. Kill bad guys. Search.

MB: Thatâ€™s a funny analogy, about the light gun game. It does feel like that, monsters running in front of you and you shoot at them. There really isnâ€™t any sense of tactical positioning, even with the few â€œcoverâ€ terrain tiles. The enemy automation, such as it is, is very much like old fashioned arcade AI where the programming was pretty much â€œcrash into playerâ€. There is no triage or variance other than what happens if you roll the monster or the cup on their activation die. I could totally get with this being a stand-up monster basher, but the combat totally blows it too. I think this is actually one of the worst resolution mechanics I have seen in quite some time. Here again, it either skews one way or the other. Iâ€™ve seen games where the players just annihilate everything with the die rolls, and others where you roll those damn grenades every time you try to punch something. And donâ€™t get me started on the imbalance of the card effect, where giving up a card is also giving up a health. And far too often, itâ€™s just not worth it.

RC: I definitely disagree with you here. I like the variance in the different attack types and think it leads to some interesting decisions regarding card play. Itâ€™s almost always possible to ensure a kill but it comes at a high risk to your character. There are a few reactions that donâ€™t seem worth using, but for the most part they all have their place and time. Itâ€™s puzzling out the best way to take your combat actions that I like, though I can see why it might be frustrating to then lean on dice. Because the game champions simplicity, it also means that sometimes there is just no way to stack enough bullet symbols to kill an elite. Iâ€™m of two minds there. I appreciate the lack of having to track damage and stats, but if everything is too simple the game can find itself without any edge at all. 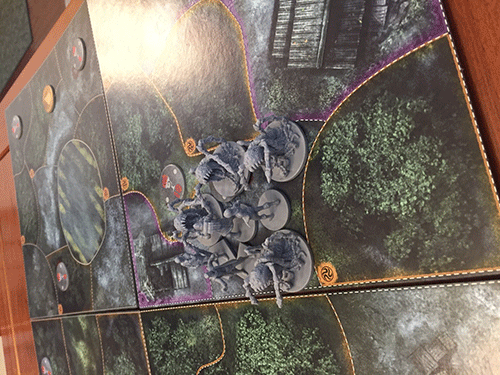 MB: But thereâ€™s more than miserable and unbalanced combat, thereâ€™s also lots of searching - which means drawing cards that either have an event that doesnâ€™t trigger half the time, a completely disassociated narrative event that does trigger, or an objective. Like I said, I cannot stand â€œsearchingâ€ for objectives in a randomized stack of cards. There are only 12, and where those objectives are can grossly impact the difficulty of the game. If the two cards you need to find are on the bottom of the deck, itâ€™s a MUCH more difficult game. If you topdeck one of them on turn one, you are in for a potentially much easier game. This is sloppy design work, and it reminds me of the terrible scenario design in Last Night on Earth â€“ a game that feels like a direct ancestor of this mess.

RC: That can also contribute to the feeling of being on rails. All the objectives require searching, and even if the objective does not explicitly say â€œsearch everythingâ€ you may end up needing to do so. It makes the execution of each mission feel samey, and leans on the narrative and unique monster families to spice it up. Fireteam Zero isnâ€™t going to shake anything up as is, but itâ€™s carved a space on my shelf. Iâ€™ve reached for it a few times when we want that dungeoncrawler feel in a quick package. I appreciate your concerns though and they make it tough to recommend blindly, especially at $100 retail. It does work really well for me. Itâ€™s a light and satisfying romp through a WW2 horrorscape and Iâ€™m looking forward to seeing what else comes out of this setting.

MB: And I am moving on. Iâ€™ll get my WW2 horrorscape jollies with Shadows Over Normandie, thanks.