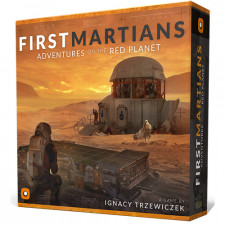 CT: First Martians is the type of game that has you excited long before it ever hits your sweaty palms. Riding on the lofty shoulders of the now classic Robinson Crusoe, this sci-fi iteration boasted much promise. The integration of app-based play, a new board chock-full of system management, and the emphasis on a campaign structure all lead to a wildly divergent experience from its predecessor. Thereâ€™s been much talk about this 2017 release and whether it was a satisfying sequel or a disappointing notation on Portal Gamesâ€™ legacy. What say you, Grace?

GP: Iâ€™m ashamed to admit that I havenâ€™t played Robinson Crusoe. Iâ€™ve wanted to for years, but never got around to it. As a big fan of app-integration in games and figuring Iâ€™d finally experience that Robinson Crusoe greatness Iâ€™d heard so much about, I was ready for First Martians to hit my table. And it did, with a thud. With six scenarios and two full campaigns included in the box, there is a ton of content packed between those cardboard walls. Each mission has you playing whack-a-mole with broken systems while also trying to figure out how youâ€™re going to survive. Successfully completing a missionâ€™s objectives makes you feel like youâ€™re Matt Damon, cleverly planting potatoes on Mars. Losing a mission is nearly as dramatic. Letâ€™s just say itâ€™s a good thing my table is too heavy to actually flip when the dice donâ€™t roll in my favor. 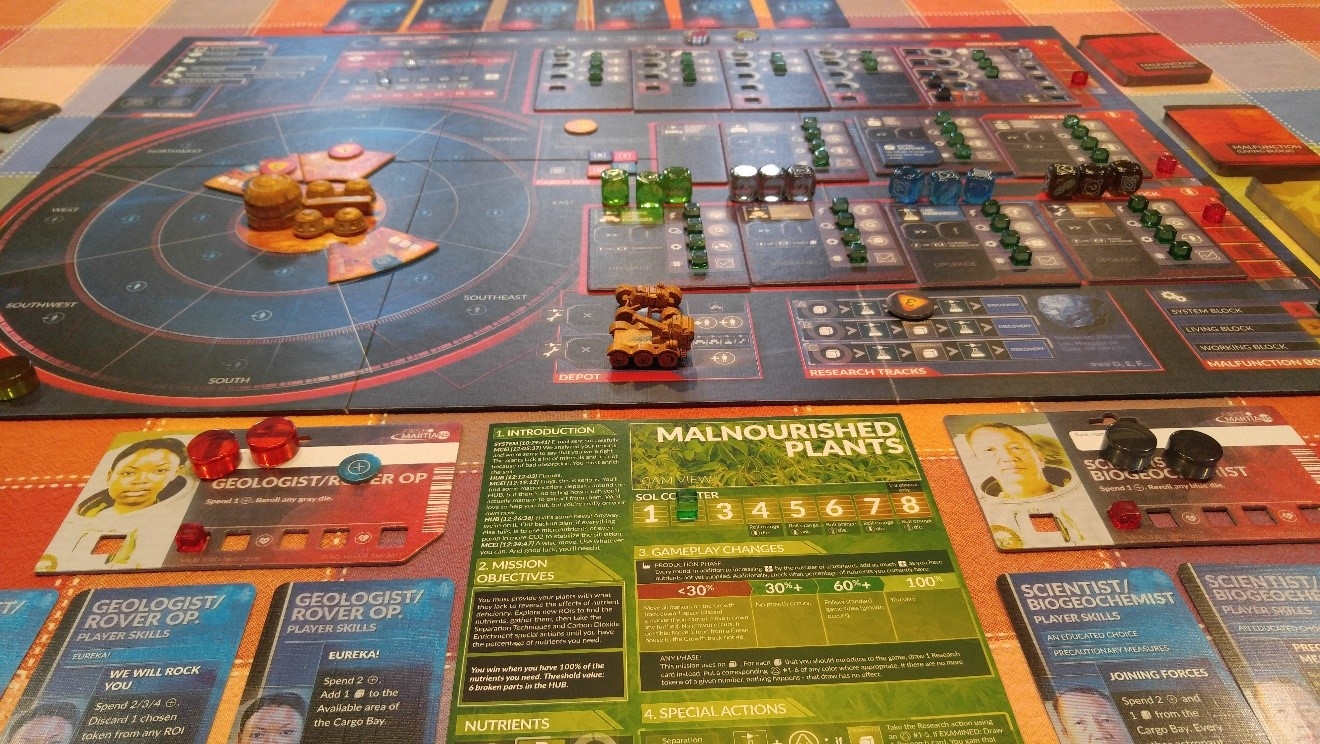 A sprawling game, both literally and figuratively.

CT: Robinson Crusoe was one of my top releases of 2012 and still stands as the near perfect mix of Euro/Thematic hybrid adventure game. First Martians does utilize some of that magic - events with delayed consequences, tight action selection via worker placement, and strong variety in scenarios - but it also kind of veers hard to the left. Thereâ€™s definitely a strong sense of juggling here with the systems constantly deteriorating. Youâ€™d rather spend the game exploring the red surface, analyzing samples, and interacting with scenario objectives, but much of it is spent in maintenance. Thereâ€™s multiple mechanisms dealing with malfunctions/breakage/failure, and itâ€™s a lot to take in.

GP: There is a lot going on yet the actual turns are simple: place your two action pawns on a space, either to perform that action yourself or to aid a teammate. Part of what made the game so difficult to comprehend though was the rulebook. There has been plenty of complaining online (shocker, I know), so I wonâ€™t go into details; however, I felt Iâ€™d be remiss if I didnâ€™t mention it. Sitting down to play the first time or two or ten was difficult. I pored through the forums and was still uncertain about many situations that popped up. The app doesnâ€™t really help you either as itâ€™s similarly marred by awkward/improper wording and the polish that other app-assisted games have. The app does barely more than provide a checklist of objectives, events, and random adventures (often in the form of annoying mishaps). The background music is nice, but it hardly immerses me in Mars. Furthermore, the story - contained in scenarios prefaces and dialogue snippets in the app - is weak. The ongoing plot points mostly consist of the astronauts arguing with their not-NASA space agency for being incompetent, leading you to have to do X or Y in the scenario. 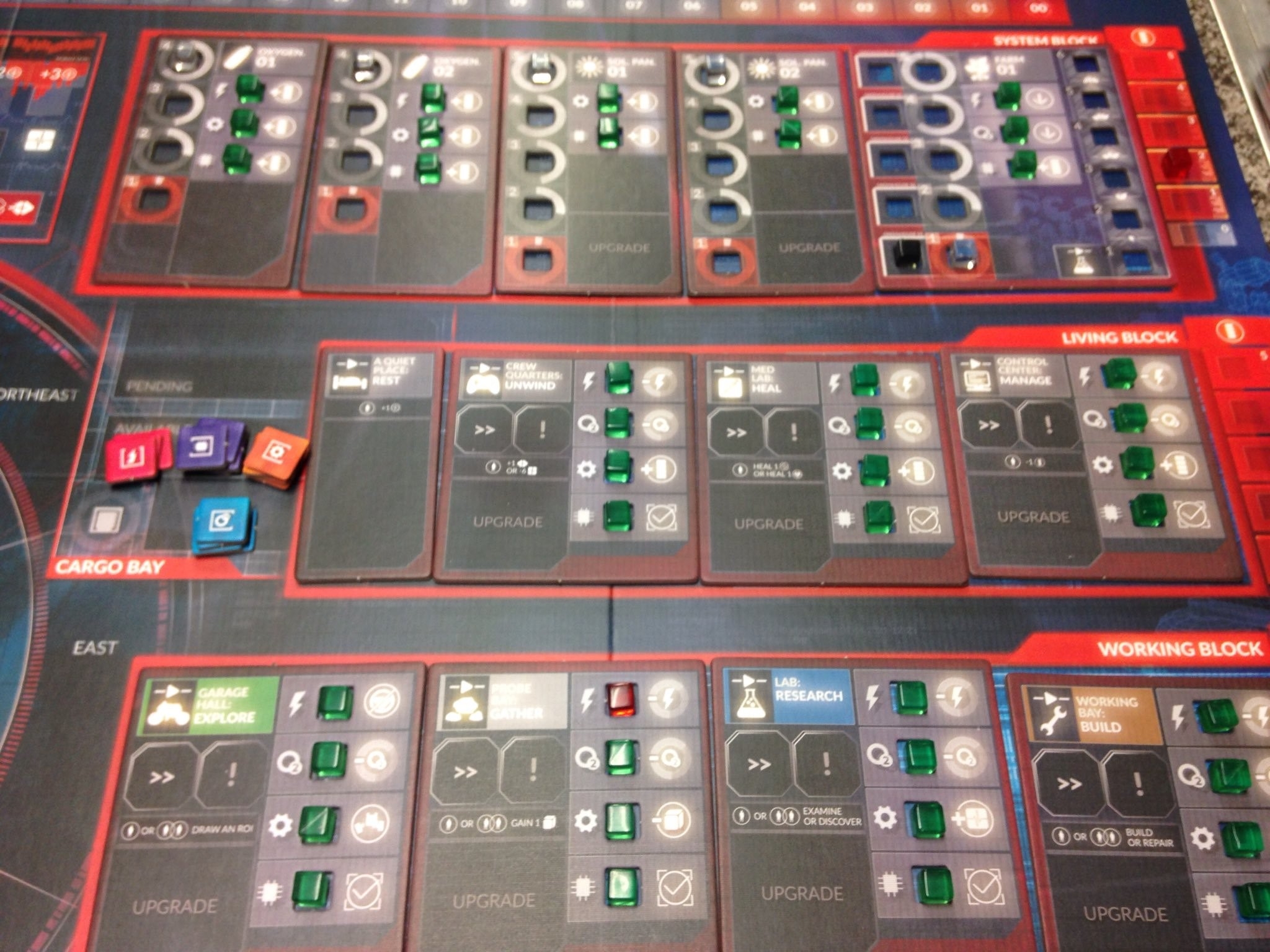 CT: I mostly agree. The rulebook certainly falls far short of its goal, evidenced by the much better downloadable rules almanac, and the app is sometimes fighting itself to present you information and story. I would say that the narrative was much improved for me when tackling the campaign. I still think itâ€™s not quite as strong as Robinson Crusoe, but the persistence of characters and scenarios that bleed into each other adds a framework to the chaos that forms a stronger mental portrait. It helps that the campaign scenarios seemed to be more strongly focused on the map and positioning around the hub, as opposed to merely hanging on for a certain number of turns or building additional modules.

GP: The campaign definitely has a better sense of cohesiveness to it. That said, I enjoyed the variety of objectives in the scenarios and the limited availability special events Portal is doing. For example, there was a seventh scenario available for the first two weeks of the gameâ€™s release. They also did a fun Halloween-themed event in the app. I hope this is a sign Portal will continue supporting First Martians, but I have to admit that my enthusiasm has waned a bit since first playing. Once Iâ€™m mid-game, Iâ€™m invested, and it certainly offers a fantastic solo play experience, but itâ€™s not something I find myself grabbing for from the shelf.

CT: Yeah, itâ€™s tough. Itâ€™s the type of game that requires a lot of upfront investment and willingness to go neck-deep. I do think Portalâ€™s continued dedication to the product is a huge boon. Special scenarios and future expansion material are a great way to maintain interest levels with the game after the new and shiny sensation has worn off.

Your point about it being a fantastic solo play experience is an important one. Itâ€™s the type of game that adding more players doesnâ€™t actually improve the dynamics at play. It adds a social layer to the game and some satisfaction in sharing the joy of triumph beyond difficult odds, but the core systems donâ€™t require an additional butt in a seat. Additional players certainly donâ€™t hurt the experience beyond extending game length with external discussions, so this is really a win-win to some degree as both solo devotees and traditional groups can tackle what First Martians has to offer. 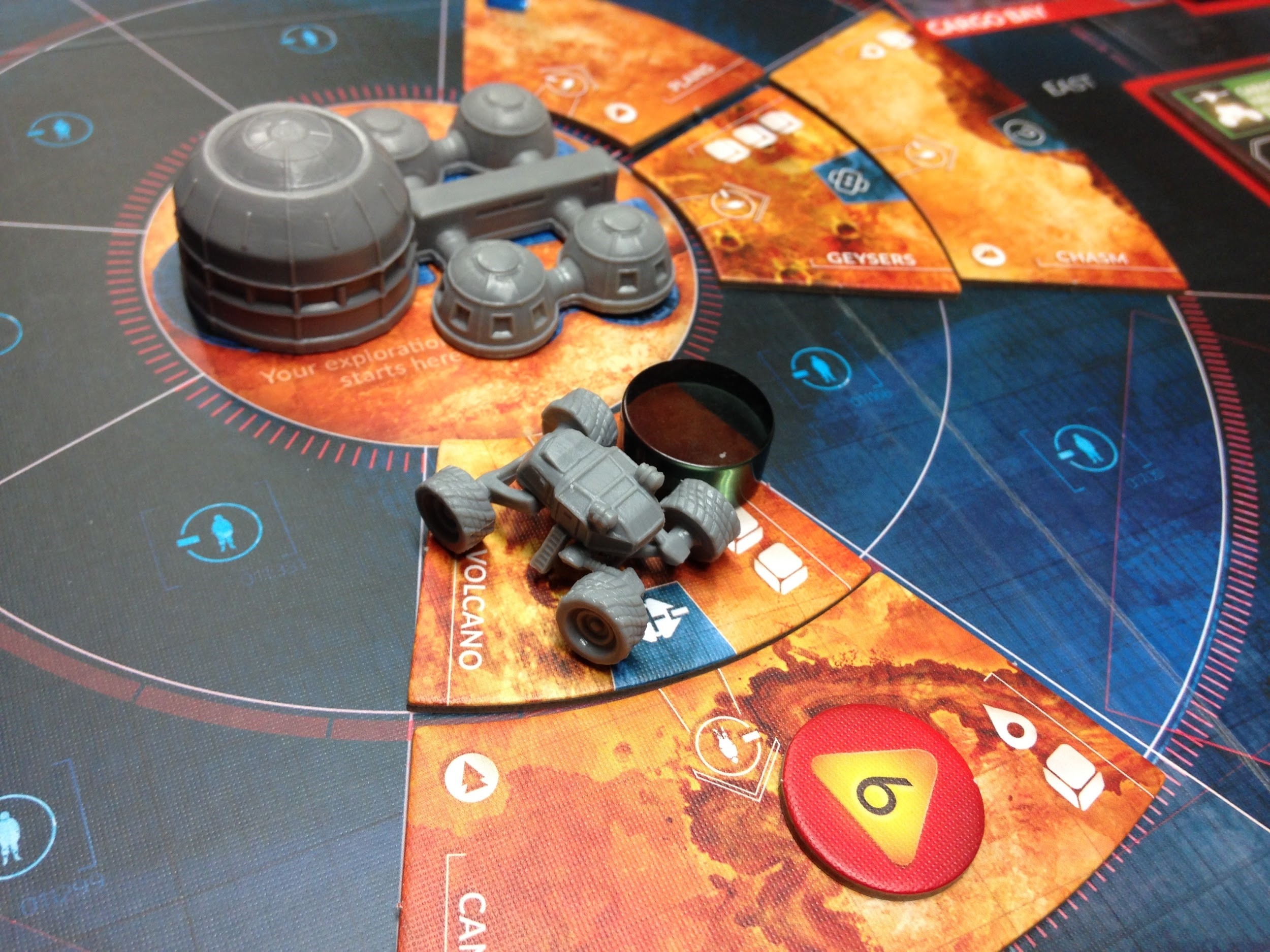 Matt Damon gets lost in a volcano.

GP: With a group that is devoted to campaign games and can do a little role play with the scenarios/missions, First Martians provides a memorable time. The app has loads of potential and, luckily for me, I donâ€™t need a whole lot of theme to get me into a game. (Confession: I skip over a lot of the flavor text and jump right to the objectives.) Still, the game gives me enough that I can overlook why something randomly breaks and focus on solving the survival puzzle in front of me instead. I always want to retry until I successfully complete a scenario/mission. The campaign is alluring, even if the legacy pieces arenâ€™t as strong as in other games of that kind.

CT: The campaign is excellent and the primary asset of First Martians in comparison to Robinson Crusoe. The question is whether thatâ€™s enough. Thereâ€™s a big challenge in feel here as itâ€™s much more about keeping everything together, like a Millennium Falcon glancing off asteroids in evasion of a Star Destroyer. Robinson Crusoe on the other hand feels a little more fulfilling and simply fun, due mainly to the fact it's about building.

I donâ€™t think itâ€™s a coincidence that First Martians is strongest when it focuses on progress in the form of one of its two included campaigns. That sense of growth and progression thatâ€™s native to Robinson is absent from First Martianâ€™s DNA for the most part, and those moments where theyâ€™re closest is when this new release starts to come alive. That leaves us kind of an awkward spot where I think its predecessor is the more fulfilling design, but many would really prefer the theme and campaign aspect of its follow-up.

GP: Even if the game doesnâ€™t always live up to the lofty expectations it sets, itâ€™s hard to not appreciate what it does. Flubs aside, First Martians is an ambitious game that offers you a wide range of experiences. From the replayability and variety in scenarios to the more linear campaign, itâ€™s hard to be mad at how much the game gives you. Unless of course you were expecting an astrophysics degree too.