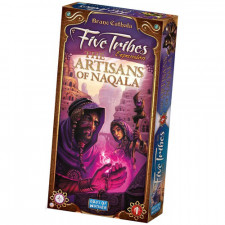 There were a lot of ways Bruno Cathala could have expanded Five Tribes, which means there were a lot of ways to mess it up. Five Tribes already had a lot of moving parts, to the point that the game is notorious for bogging down with some players. Adding more stuff might make the game even more cerebral. But if it merely added some variety in the various decks of cards or main tiles, is that enough to justify the cost of an expansion? The Artisans of Naqala is probably the best-case scenario for how Five Tribes could be expanded. I wouldnâ€™t call it absolutely essential, but it integrates into the base game effortlessly. It gives seasoned veterans some new facets to consider, all of which are fun without weighing down the game.

The biggest addition is that of a sixth tribe, rendering the gameâ€™s title obsolete. These purple meeples represent artisans. Grabbing a pile of them gives the player access to artifacts, which might give victory points, or give one-time special bonus actions. These represent some hidden information in the scoring, which is actually quite welcome, adding some ambiguity and uncertainty to the game. When someone is collecting artifacts, itâ€™s always a question if they are stockpiling points, or holding back a special power to use at a key moment. Itâ€™s one thing that canâ€™t actually be calculated, uncharted territory in this game. The special artifact powers are surprisingly strong, which is welcome in such a sober design. I especially like the flying carpet, which lets you drop the last meeple of a group anywhere on the board. Like the djinns, the artifacts inject just a little bit of magic into the world of Naqala.

To accommodate more meeples, there are six new tiles in the game. These have some new actions of their own, like allowing players to buy any resource card from the marketplace, or to use their spare purple meeples to get more artifacts. They also add mountain ranges and a chasm, both of which are impassable. These terrain effects are probably the most interesting part of the expansion, subtle though they may be. They shake up the board a little, and create much more variance between games. With more strategic possibilities, they are probably necessary to cut off some possibilities.

There are a couple of other elements, like some new djinn cards and little tent tokens that give yet another way to get points when they are surrounded by tiles with red numbers. It sounds like a lot, and in theory it is. Those who found Five Tribes too prone to calculation will find no relief here. That said the extra information doesnâ€™t slow down the game in practice, perhaps because any extra stuff is sort of academic. I mean, if you felt the need to consider all fifty possibilities on your turn, will four more slow you down that much?

Artisans of Naqala is one of those expansions that adds some new strategic possibilities without ever feeling too strong. It makes its presence known, but it does so with a pretty light touch. Five Tribes was always a game where you need to find a couple of things to do, and do them as well as you can. Artisans creates a couple more options for the playersâ€™ focus, but rather than forcing the players to embrace all of the expansion elements it allows them even more freedom to pursue what they want. The players are able to specialize in their strategies even more, which was one of the most satisfying parts of Five Tribes in the first place. Of course if you donâ€™t want to worry about the artisans, thatâ€™s not a problem. As with all paths in this game, itâ€™s dangerous to let one player dominate the purple meeples, but they donâ€™t seem any more powerful than any other element.

To be clear, nothing here fundamentally changes the Five Tribes experience, so those who didnâ€™t like the base game can rest easy that there is nothing for them here. It is still a thinky game with even more possibilities than it had before. It also is resolutely abstract, although the individual effects of the different tribes and djinns all have some nice flavor to them. Thereâ€™s enough here that new players might find it overwhelming, but fans of Five Tribes will want to use it every time. Artisans of Naqala is not the kind of expansion that people will point to as some kind of milestone, like the Catan expansions. But Five Tribes is something of a fine-tuned machine, so any expansions would probably have to keep the game basically intact. In that sense, Artisans of Naqala is just the expansion Five Tribes should get.