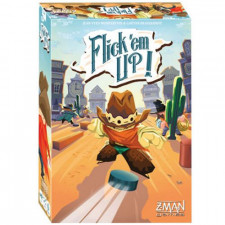 Flick 'Em Up was an exceptional release in a year of exceptional releases. Even with the flood of quality titles in 2015, it poked its Stetson above the swelling tide and fired off several rounds towards the sky. People ogled the deluxe wooden components but many never took the next step and actually acquired the beast. The main culprit here was the $70 MSRP for a game that's decidedly casual.

The game was released to great fanfare and sold quite well, but many were still vocal about the high price and wanting to get a piece of the steak for a dollar menu price. Thus, the wide release version of Flick 'Em Up was born, published under the Z-Man label as opposed to Pretzel Games. Both are owned by Filosofia so this isn't particularly shocking.

This new version ditches the deluxe wooden box and all the hefty components in favor of good ol' plastic. You have plastic cacti, plastic bases for the buildings, and plastic oversized cowboy meeples. The dimensions for everything appear the same but the box is drastically smaller. Besides the price, this is the greatest asset of the release as it's now far easier to transport this game and share the six-shooter action.

I have to admit I was somewhat worried that the slick play of the original would suffer in this new implementation. When shifting component structure in such a drastic way itâ€™s undertaking a large risk for a dexterity game that relies on its feel and action to win the players over. Taking a huge bite out of the MSRP is nice, but if play suffers it wonâ€™t fly.

You can let out a huge sigh of relief as the game still runs very smoothly. The movement disc and bullets fly slightly faster but the difference amounts to comparing the speed of two billiard tables. The shift in weight (of virtually everything) is noticeably to some degree but it doesn't have a measurable effect on the experience. Barrels and beams may scatter just a bit farther and the gallows seems a little more top-heavy, but it's still an outrageously fun game and it still looks pretty.

I do of course still prefer the wood version if I had to back one shooter in a duel, but only because it looks a bit more grandiose and feels more deluxe. With that being said, I'd be perfectly content with the plastic edition. You still have all of the scenarios, all of the same options, and even all of the same cardboard (sans the large stands the cowboy nameplates sat on). The inclusion of the scenarios inside the same booklet as the rules is a positive as well so you aren't stuck flipping back and forth in different manuals forgetting where the duel or dynamite rules exist.

The insert here is way purtier than that bare wooden feller. Everything has a place in the vacuform tray and it was wonderfully thought out. There's even a little clear lid that covers the components so you can lay the rulebook and buildings atop; just perfectly executed. 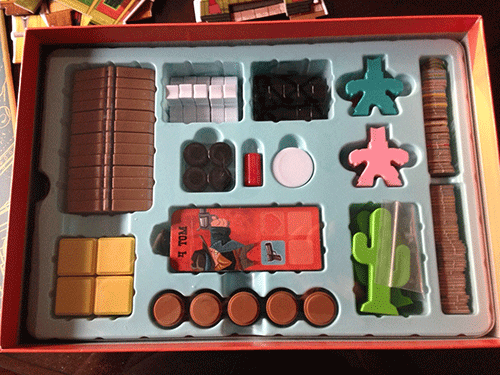 Overall this is a successful implementation of a great game which is now available at a great price. If the ticket cost scared you before, you can now excitedly hop on board the 3:10 to Yuma and stretch out your flicking finger for the mayhem to come.