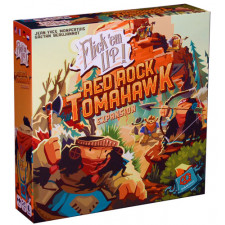 Red Rock Tomahawk is the second Flick 'Em Up expansion and continues the trend of extremely catchy names. While Stallion Canyon added horses, this one adds an entirely new faction: the Native Americans. The game already found success by appealing to our inner child, but now it hits home even harder as we can finally play cowboys and Indians.

Awesome little meeples with feather headdresses, a new bow mechanism, tomahawks you can throw, and new terrain make this one a winner. There's no need to dance around--this expansion is great. It adds new wrinkles in every facet of the game while maintaining that deluxe quality Pretzel Games has become known for.

Red Rock Tomahawk (I can say that all day) follows in the previous expansion's footsteps by including several learning scenarios. These exercises allow you to familiarize yourself with the new weapons and prepare for war. It's clever but experienced gamers should have no qualms about skipping these and diving right into the scenarios proper.

You'll quickly realize the new mechanisms are outstanding. Instead of firing bullets you attach this little cardboard platform to the waist of a Native American and flick elongated wooden arrows. Since the arrow pieces sit off the table and atop this raised platform, the physical action can be awkward at first. It will take you more shots than you'd think to get accustomed and your skill may lag behind. 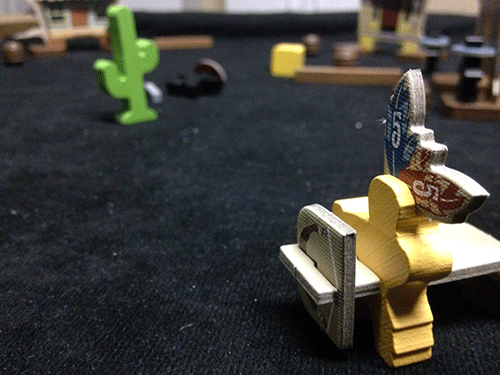 That doesn't detract from the genius of the mechanic though as arrows fly differently than bows and offer a different feel. This is important as it differentiates the factions through gameplay utilizing the heart of the design--the dexterity element. Merely giving them special rules or scenarios would have been an easy cop-out, but this highlights the fact that this design team has put a great deal of effort into the game. And it shows.

The tomahawk is stood up adjacent to your Brave and flicked in a similar motion to the dynamite in the base game. It will tumble end-over-end due to its increased height and arches through the air just as you'd expect a thrown weapon to. It's extremely satisfying hurling a 'hawk into a bandit's skull and sending him tumbling into a nearby cactus. It's quickly become tradition to wail a Native American war cry before the attempt at my table.

The new terrain is utilized well in the included scenarios and features forests that Natives can hide in, and a mountain piece you can enter and gain the high ground. There's also a totem pole for visuals and a tepee which is basically another building, but the real draw is these new mechanical functions. Hiding in a forest allows you to hop about the table to other forests on the map so the enemy never quite knows where you are. It's entertaining as all get out and allows you to sneak from the woods and deliver a killing blow to their hapless drunkard crew.

Did I forget to mention there's a Gatling gun? Damn right there is, and it lets you fire four small bullets simultaneously. You line them up in a cardboard barrel piece similar to the Winchester and spray lead. It even allows ricochets to count so it can be downright scary. 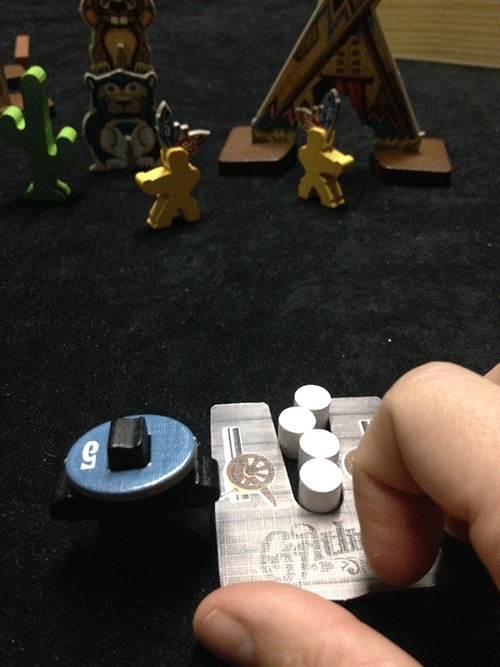 The included scenarios are a huge selling point as they tie all these new mechanisms together with a narrative touch. They feature interesting challenges and waste no time cramming as much fun as possible into the design space. The only disappointment here is that none of the printed setups utilize the Stallion Canyon expansion. This is a necessary evil as both products are standalone and they didn't want to require consumers to own both. The wound is partially patched with the free online scenario which is stellar. I strongly hope that we see more of these down the line as Native Americans should be firing arrows and chucking tomahawks from the back of colts.

As an entire package this does not disappoint. Every new element is enthralling and an entirely new layer is added to your shootouts. The only criticism one could reasonably levy at this point is that it may be approaching too much Flick 'Em Up. You can no longer fit everything in the base box and setup can take a bit longer as you paw through all of the bits. For most, that will be a price definitely worth paying as the sweet cowboy and Indian action is too much to pass up.