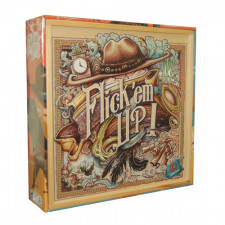 There are two kinds of people in this world, my friend: those who prefer a wrangling optimization puzzle and those who clamor for sheer youthful joy. Flick â€˜Em Up caters to the latter like a warm peacemaker resting in your palm and a sweet cigar clenched between your teeth. Itâ€™s perhaps the most direct and enjoyable dexterity game Iâ€™ve ever played, and it nails the theme so perfectly that I canâ€™t help but place the gigantic wooden box on a pedestal the size of Tucoâ€™s greasy head.

This new release screams deluxe at every opportunity like an Edvard Munch painting fixed on the wall in permanent fervor. The wooden box is large, sturdy, and features brilliant imagery. The cowboy meeples are enormous and accompanied by vibrant cacti and barrels you canâ€™t help but shake to see if theyâ€™re empty. The large 3D cardboard buildings fill up your table like a posh Western town on the verge of outburst. It has that Queenâ€™s Gambit quality of allure that pulls you in from across the room as you see a group of friends cheering and hollering like fresh adolescents partaking in recess debauchery. Meanwhile, your tired middle-aged posse is poking you with a box lid inscribed in German and prodding you to push a muted cube a couple inches across a paper map.

While everything here feels like those enormous stretch-goal laden Kickstarter dream games promising the future and all of your desires, what is particularly astounding is just how energetic and satisfying the gameplay is. Scenario based and full of clever narrative, players take turns activating their bandits or lawmen to move about the board and fire their six-shooters via flicking discs. Thereâ€™s a degree of skill required to expertly shoot the movement marker through a doorway so that you can take up cover inside one of the looming structures or snipe a long distance snapshot at a poor rustler caught in the open streets. When you connect a forceful blow against an enemy and the meeple topples over, his little cardboard hat shooting off into the wind, you fist pump like your name is Pauly D. The reward and gratification comes instantly with visual authority and the game continually provides firm high-fives.

Opting out of a board and relying on the participants table was an overtly clever move. Surprisingly, Flick â€˜Em Up plays well whether you take to the dining room or that cheap plastic rickety card table your local store employs. Even felt tables work quite well as the discs effortlessly skip across the surface and nail the opposing vagrant in his little wooden skull. Thought and care was taken to provide clear stickers to apply to the wooden supports for the buildings in order to protect your table, but I havenâ€™t personally noticed any issues.

This design team also completely nailed a textured and engrossing approach that pulls you in over time. Each of the 10 scenarios slowly includes more complicated and varied rules as sacks of gold, dynamite, and even pulse pounding duels are introduced. This duel mechanism is one of the most brilliant aspects of the game as you take turns firing a shot and then moving your gunslinger one step closer, encroaching on death and shuttered violence. The participants at the table sit in cold silence with hushed breath as you line up your shot, waiting for the carnage to ensue. I could sit around all day trading flicks with even my most hated of compatriots and it would be a day well spent.

The clever little touches abound as more layers are discovered. The first time youâ€™re given a stick of dynamite to flick end over end the tension will be remarkable. The small Winchester cardboard piece allows you to guide a disc for a straighter shot in such a smart and simple way that youâ€™ll slap your broad glistening forehead in bafflement. Thereâ€™s even a little clock tower with a spinning dial you use to track turns that will put a smirk on your shady mug. Nothingâ€™s forced or ever jammed into the soft spaces of the design; everything is just unrelentingly smooth and approachable.

Not only the tools, but the variety in tasks and objectives found within the included scenarios is glowing. While there are a few that require you cut down the opposition with outright slaughter, youâ€™ll rob banks, steal cargo, and free the unsavory from their swinging perch atop the gallows. They are inspiring and the countless stories and experiences will overfill your memory banks and lead to exciting discussion as you try to describe the game and a particularly nasty shootout in the streets to the uninitiated. Since the conflict and envelopment seems to rise as you dive deeper into the game, you will feel the stakes increase and become engaged in the narrative that simply used to be an element of the background scenery.

This is a game that you can bring out with literally anyone and it canâ€™t possibly fail. OK, maybe not the 18XX crowd or those deprecated Euro-only stuffy dudes, but we donâ€™t hang out with those people anyway. Flick â€˜Em Up immediately connects to the pleasure centers of your brain and doesnâ€™t let go. Itâ€™s like eating a fantastic piece of pizza, drinking an ice cold coke, or listening to a killer tune cranked to 11 on your car stereo. Engaging tasteful fun that anyone with a childhood and a soul should easily gobble up.