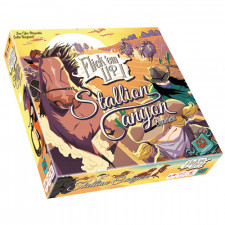 You canâ€™t have cowboys without horses. Exactly like the recent Colt Express expansion, Pretzel Games have hit us with a selection of wooden mares and accompanying mechanisms. Players can now dig in their spurs and take pot shots at the pretty beasts of burden to re-enact that final iconic scene from Butch Cassidy and the Sundance Kid. Only your chunky horse miniature wonâ€™t break its neck in this outing.

This production is all class just like the base game it extends. Stallion Canyon is a visually stunning package with exceptional artwork and beautiful pieces. The horses have thick manes and support the oversized meeples from the base game. The new female participants on both sides of the field offer a more diverse selection of protagonists. The new two new buildings are cut from the same cloth as the base game with vibrant art and stylized shapes. The rulebook is also top notch and fully illustrated perpetuating that deluxe lineage.

The main attraction are those four horses that come in white and a dark grey color. They have an appropriately drastic effect on the play of a scenario and are treated with the mechanical respect they deserve. When riding horseback cowboys may move twice with each action, which will let you absolutely hightail it across the table. In addition to mobility it can be difficult to shoot a mounted gunslinger as you need to fire your bullets up the included ramp and physically knock them off the beast. This is not only interesting from a tactical perspective but itâ€™s extremely fun. Just like the natural joy from popping off hats as you connect with a target, watching a lawman eat dirt when you nail him in the side of the head is exhilarating. Youâ€™re reaching for a high five before the dust settles and canâ€™t wipe the grin off your scarred face.

Even more interesting is the way horses are utilized in the scenarios. The colts can either be treated as wild or tame depending on what the particular setup calls for. Wild horses cannot be mounted but may be roped by making a flick with the new included lasso piece of equipment. These cardboard U-shaped pieces need to land with the targetâ€™s foot between the ends in order to reel them in.

When you domesticate the beasts you place these little plastic bridles on them which are cute as all get out. Your kids will be making sounds mimicking the Duke and having the majestic fellas rear up in triumph. Itâ€™s fantastic and full of youthful joy like you read about.

Those ramp shots can be difficult to master as it requires a new technique. The rulebook comes with a slick little set of training missions which have you competing to rustle up some colts and take shots at barrels atop crates. This idea of soft launching players into the new mechanisms is a pretty solid one and is worth working your way through before committing to Stallion Canyon proper.

Iâ€™m excited to see the inclusion of cowgirls with this release as itâ€™s definitely something the game should incorporate. Girls can now get in on the fun without wondering why theyâ€™ve been ignored and itâ€™s a smart addition that results in a win. Itâ€™s also humorous to see the big meeples whose legs form the shape of a skirt.

There are two new 3D buildings in this expansion â€“ the Stable and the Outlawsâ€™ Hideout. They pale under the large shadow of the two massive Canyon pieces that stretch above all the terrain. The inclusion of these outstanding elements of scenery is more than simply cosmetic. Some setups require players pass through the canyon by making a shot through the base of the piece. This movement is similar to moving inside a building but you emerge outside the other end of the Canyon.

The big gain here is that it allows the table to be segregated into two parts. To travel between them you need to make a movement shot that is predicated on some skill. Additionally, when you realize there is a multi-table scenario that has you traversing the Canyon to move between two entire physical setups â€“ mind blown. This is as cool as it sounds as you have two distinct battlefields which adds a new strategic element to the game and really changes up the feel of the entire shootout.

Overall, this expansion lives up to the magnificent quality of the base game. Itâ€™s physically beautiful, includes several new exciting mechanisms, and extends that Wild West spirit and passion in a meaningful way. Flick â€˜Em Up may just be the best dexterity game in print and Stallion Canyon only furthers that bid.