Editorial - Flight of the Phoenix

Editor's note- we here at The Review Corner are obviously very excited that Miniature Market has resumed offering Games Workshop products and we look forward to providing you with top-notch coverage of them through our podcasts, video reviews and of course our written content. Myself and Lead Writer Charlie Theel wanted to offer some thoughts about Games Workshop, one of the longest running and most successful brands in the hobby business, so indulge our wide-eyed fanboyism in this pair of editorials as we celebrate.)

I'm a gamer. It's a big part of the fabric of my being and deeply rooted throughout my life. In the context of coming of age, I had the typical struggles of self-esteem and discovering who I was as a person. I also had miles upon miles of cardboard, plastic, and hardback manuals. The fantastical was part of my routine for as long as I can remember. And not just reading other's stories or clinging to dreams of a third party narrative, but forging my own.

It's funny how nostalgia can appear seemingly out of nowhere.

I'm driving to work, a 32 year old father who's already emptied half the tank struggling with my three year old to get out of bed at 6:30AM and take on the day. I'm heading to work-that place where creativity is burrowed between death and outer space-and it comes on: Rage Against the Machine tearing up the speakers and assaulting my ear drums. And there I am, back in High School bleary-eyed and nodding my head in the back of my buddy's '87 Caprice.

Music can touch the soul in unpredictable ways. Gaming can too.

Be still my heart.

I'm sitting at home and there's a knock at the door. I see the oblong box sitting on my porch, casually tossed on the ground like a grease-stained hot dog sheath from 7-Eleven. I can't fault the man because that's how couriers roll, with the numbers of an army and the discipline of a boy band. It's not long before I'm into the damn thing and my dog's sniffing away at the new member of our household.

When Games Workshop announced Warhammer Quest: Silver Tower it was a turning point. Or at least it was the first visible cue of such a shift. This was a company that was such a large portion of my youth that thoughts of the two were hopelessly intertwined. Warhammer Quest and the Old World in particular was the fertilizer for an eternity of growth. When we were too old to play with Legos we cut them up performing "conversions" and slapped them on "movement trays". We pushed them around the battlefield as my Dwarves harbored inimitable grudges against my best friend's pointy-eared weaklings. I didnâ€™t have a phone to play with during the magic phase. I just sat, watched, and cursed him under my imagined heavy Dwarf breath. 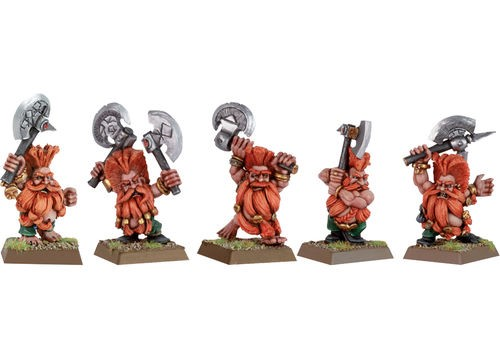 Gingers were bad mothers in my time.

This was back when Bretonnians were still a thing, before they weren't and then they were again. It was the golden age of Games Workshop where shareholders was not a part of my vocabulary and every week seemed to have imaginative new releases. I'd walk to my local hobby shop, which had an uncanny scent similar to my grandma's basement, to pick up the new issue of the Citadel Journal. I'd special order expansions like the Warrior Priest and cut out Space Hulk tiles from the current White Dwarf.

Then life moved on. Games Workshop and I parted on mutual terms. It was disappointing in the sense of breaking up with someone who you no longer loved but were uniquely comfortable with. Competition arrived in the form of Fantasy Flight and other young blood like the formidable Mantic Games. The other Nottingham company no longer worked behind the scenes to produce magic; instead the focus was on tearing down trust and viciously protecting an IP which had begun to decay under its own self-worth.

But Silver Tower. That box just has it. Games Workshop waded into the endless pit and finally emerged stronger for it all. It couldn't have arrived at a perfect time, when the gaming community was swollen with the bloat of Kickstarter and an endless sea of products lacking that editorial touch. 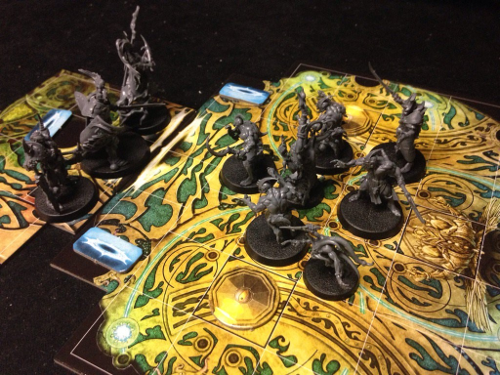 The lair of change.

The new iteration of Warhammer Quest isn't perfect but it's damn good. Silver Tower delivered on its promise and Shadows Over Hammerhal iterated and improved. They took the hard road and re-worked the game from the ground up with an entirely new system. What's absolutely astounding is that this release honors and captures that previous title in spirit while straying so far mechanically.

If this is hard to hear I apologize, but the OG Warhammer Quest is simply not a great game. It had great ideas such as the huge tables with stat lines for nearly every model you could possibly own, but as a whole the system was very weak. It did not matter one bit in the context of its time but it certainly does in 2017. As we can see with the re-releases of Space Hulk and Blood Bowl, their design team is completely comfortable exercising a very conservative scalpel when appropriate. With Warhammer Quest they needed a huge rusty axe to hack the weeds away.

Then came Gorechosen. This may very well be the best release Games Workshop has ever produced. If not, then it's certainly second. It's primal, direct, and creative with minimal overhead. It's Ameritrash for an industry that's forgotten what that means.

And if that's not enough we now have the redux of Necromunda. Shadow War: Armageddon not only captures most of the exceptional touches of the unique underhive setting, but sticks with an addictive campaign element and steadfast man-to-man gameplay based on 40k second edition. I would love to dive back into a heavier campaign system and dust off my hard-ass Delaques, but the more streamlined approach is a better fit for my current lifestyle. The added bonus of tinkering with 40k factions and diving into the fluff is icing on that grimy sump-born cake.

It must be asked: is the resurgence of Games Workshop built upon quality or the veiled wisps of nostalgia? I'd like to think I can drive a line between the two and discern reality. After all, the arrival of Castle Ravenloft and the Dungeons and Dragons Adventure System line hit me in a similar location in the gut. Yet, I never fell for that trick, er, illusion (sorry GOB). It didn't pull off the previously thought impossible. Without engaging game-play it's a boat without a hull.

Here's the thing, so much fiction and cognitive energy is spent on the concept of time travel. We have board games that don't understand how acronyms work, literature that's been around longer than Betty White, and dreams whose origin is far too murky to surmise. The closest approximation of this nebulous scientific concept is actually nostalgia.

Nostalgia isn't about escaping your burdens and fleeing to a golden yesteryear. It's not about reclaiming your youth in body or presence. You don't really want to go back to junior high when you were driving to school in a beat up Pinto-I expect the worst from my readership and assume you had to repeat a few grades. The idea is to get back to a state of mind. The allure of those glory days isn't built around unwrinkled skin and simpler times. Trading out today's problems for yesterdays doesn't help. What we need, what we desperately crave, is the freedom to imagine. Adulthood has strangled every last ounce of childlike inventiveness from our soul and we seek every opportunity to find it once again.

And find it I have.

Games Workshop has given me back my mojo. Plastic and cardboard and unbridled creativity are my jam. Sometimes you don't know what's ailing ya until you've found the cure.