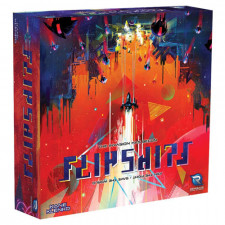 The chief goal of any dexterity game is to convince me Iâ€™m not just playing Tiddlywinks with a shiny coat of paint. How well a game manages to integrate its dexterous elements into an overarching narrative is a key factor in whether or not it will succeed as a larger board gaming experience. The very best entries in this fun, underrated category of board games perfectly combine an addicting physical challenge with a strong narrative hook that help the dexterity piece of the puzzle fit into a larger, more fulfilling whole.

So first and foremost is the question of whether or not the dexterity piece of the game is worth playing. With Flip Ships, itâ€™s good, if simple to a fault. Youâ€™re tasked withâ€¦ uhâ€¦ flipping your shipsâ€¦ onto attacking enemy ship cards. The challenge is in both aiming accurately and flicking with just the right amount of pressure, which is no easy task. But even when you miss, you have a decent chance of landing on something, even if itâ€™s not exactly what you were aiming for, so that helps alleviate some of the pressure for those who are no good at these kinds of games. 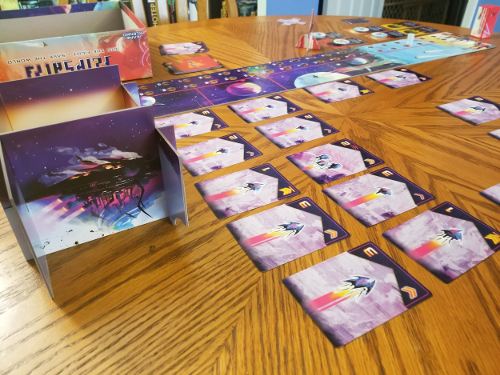 The alien ships descend, fueled by the imagination of thousands of campy B-movies from ages past.

I didnâ€™t find the flicking element to be quite as good as some of the very best dexterity games in recent memory like Terror in Meeple City or Dungeon Fighter. Itâ€™s solid, it works, it is fun and challenging. But thereâ€™s a lack of variety there that prevents it from being up there with the greatsâ€”maybe something for an expansion to address with differently shaped ships or other physical obstacles to mix things up. I freely admit Iâ€™m nitpicking hereâ€”this part of the game is really good, but just shy of great.

The second piece then is the narrative, and here Flip Ships is a shining example of how to do this kind of game right. Itâ€™s an unlicensed clone of Space Invaders, and it pulls off the alien invasion arcade game motif stunningly. We feel the tension as the ships approach, we see the massive mothership looming over the city, and we can even smell the pizza and spilled beer and rolls of quarters from the arcade we hung out at as kids.

This mostly makes up for the gameâ€™s shortcomings as a pure dexterity game, since the simple flicking will start to fade into the background, underpinning the strategic decisions your team will make with each tense ship launch. Youâ€™ll make sure your teammates can take out the shield ship so you can target the ship with a thick hull thatâ€™s about to blow up your city, using your special ship powers to blow him sky high, as long as your wingmen can back you up. Youâ€™ll be playing off your friendsâ€™ special abilities all over the table, coordinating your attacks, biting your fingernails as the enemy ships advance too quickly and too aggressively. Theyâ€™re too close! Stay on target! I canâ€™t shake em! All the classic tropey sci-fi quotes will emerge around the table before too long. 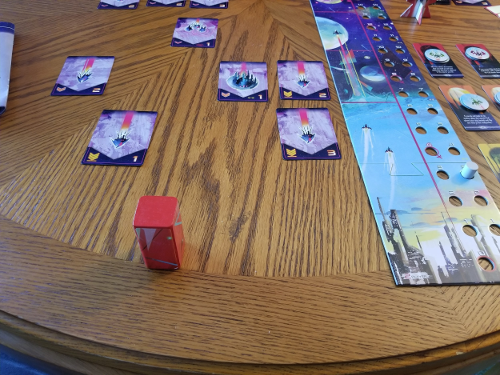 Unfortunately Flip Ships doesnâ€™t let you deposit a quarter to continue when your people die a fiery death.

The game does have one truly unique feature, and thatâ€™s its endgame victory conditions. Thereâ€™s a big mothership floating above the city, and you have to blow it up and destroy all the attacking ships. But the game gives you some freedom in how to approach this puzzle: you can start whittling the mothership early and then just have to destroy any lingering ships to win, or you can save her for the end, endure one wild final kamikaze assault by the deadly alien fighters, and then face the boss in a duel to the death. This structure leads to some interesting decisions: do you use your anti-mothership special abilities early and then just play cleanup with remaining ships, or do you ignore the mothership altogether in order to prevent your city from burning in the throes of hot plasma death before soaring to almost certain doom in attack formation against the Death Starâ€”er, mothership?

Itâ€™s a grand experience all around, no matter what your team decides.

When the Game Over screen pops up and youâ€™re all out of quarters, Flip Ships is the rare dexterity game that manages to rise above the simple pleasures of flicking, dropping, throwing, or rolling stuff around your board game table. Short of dropping a couple grand on a Space Invaders arcade cabinet for your game room, itâ€™s the closest youâ€™ll get to the halcyon days of blasting away at pixelated foes bent on turning your hometown into a mushroom cloud.