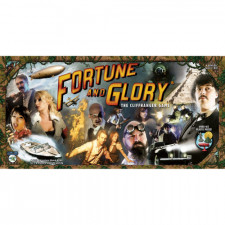 Fortune and Glory is too complicated for its own good. With a convoluted set of turn phases, modifiers and exceptions written in tiny footnotes, and rules spread out across dozens of cards all over the dining room table, it can be a beast to run, even for a Flying Frog game. At the same time, itâ€™s too simple for its own good. Underneath the gorgeous miniatures and towers of illustrated cards with pulpy illustrations, all that is really here is a very basic push-your-luck dice game. While neither of these extremes usually presents a problem for a thematic game enthusiast like me, at the end of each session, Iâ€™m left wondering if this particular unholy marriage of fiddliness and merciless dice rolling is worth the effort.

The push-your-luck aspect of the game is at least good. Players will feel the tension as their hopes of succeeding an adventure stay alive by just one lucky die, and theyâ€™ll groan in despair as a surefire roll flops and sends their explorer failing in the most horrific of ways. The system lets you continue rolling away at a challenge so long as you squeak by with one successful result. This design full of desperate final rolls and unlikely outcomes feels right at home in a game about pulp fiction adventures from the 1930s. The Cliffhangers are a stroke of genius, as they build even more tension into the design as you wait to find out what happened to your most likely doomed adventurer in the next round.

The designers have piled tons of content on top of this interesting core. There are card decks for everything, from the Nazis and Mobsters your hero will face on his or her globetrotting adventure to the artifacts youâ€™ll grab to win the game. The variety is excellent, and though youâ€™ll end up seeing the same adventures again and again, theyâ€™re so generically pulp fiction you can definitely imagine your fearless adventurer getting captured by Nazis several times in pursuit of one ancient treasure. Thematic game fans will inevitably drool at the sight of the giant coffin box (an endangered species), and the sheer volume of tokens, minis, dice and card decks it contains.

Ironically perhaps, the game could have used several more distinct card decks for the various regions. While Iâ€™m no fan of extraneous piles of tokens and cards, my character has explored one too many ice caves in the Sahara desert for the theme to sit quite right with me 100% of the time. While many adventures string together quite nicely, sometimes itâ€™s difficult to not skip the flavor text and just start rolling for successes. But by and large, the game has enough great thematic content to give competing experiences such as Eldritch Horror a run for their money

Unlike that game however, Fortune and Glory fails to neatly pack all of its excellent, pulpy goodness into a clean, distinct structure. Players are left wondering which exceptions apply to which particular situations, and the poorly organized rulebook is happy to abandon you in a wasteland of uncertainty. Those who have played other FFP games will no doubt figure out a happy solution and continue playing without losing too much sleep over it, but sticklers for accuracy can expect many hours poring over rules discussions online to figure out what the designerâ€™s intent was.

Thatâ€™s not to say that the game is all that complex, but the wording and timing issues will halt the flow of play more often than Iâ€™m comfortable with. Can we play this card at this time, or do we need to wait until the next phase? Does this ability apply during these tests or only during those ones? Players will have to memorize the standard barrage of keywords and phases before theyâ€™ll begin to get into the groove more easily. Bizarrely, victory points are dubbed Fortune, while currency is called Glory. I can rationalize strange rules and abstractions with the best of them, but that bit of nomenclature still makes no sense to me.

As is typical for Flying Frog designs, the game comes packed with every mode you could ever want to play. There is a co-op game for friendly adventurers, the standard competitive experience, a set of basic and advanced rules, a team game, and the ability to play solitaire. Strangely, the competitive mode captures the cutthroat heart of the design most effectively, while the sometimes lengthy string of adventure tests and demanding upkeep lend themselves more to a leisurely solitaire pace. And of course, the design allows for easy tweaks on the fly. Players can adjust end victory conditions for time constraints, throw out the villains and roaming Zeppelin for a more forgiving, streamlined game, and take out the KO punishments to prevent late game setbacks.

I do like this game, and it pains me to acknowledge its flaws. But at the end of the day, when Iâ€™m picking a game to unwind with, Fortune and Glory gets passed over more often than I would like. Itâ€™s too complicated for a light, fun, story generator and itâ€™s too simple for a big, meaty thematic experience. I would certainly recommend it to fans of Flying Frog who love their big, crazy, plastic-laden games - warts and all - but itâ€™s not a great starting point for outsiders interested in their designs.