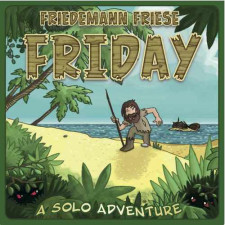 BC: Friedemann Friese is a board game rock star. Itâ€™s not just his green hair, but the fact that he puts his indelible stamp on every single thing he touches. I doubt any other designer could have successfully pitched Friday, a solitaire-only deck-building game, to as risk-averse a publisher as Rio Grande Games. Yet it stands as a popular solo game and one of the first solo games for a huge population of gamers. It is also, I think, one of the best deck-building games. It is, without question, a success. Between the easy-to-grok rules and the tiered challenge levels, whatâ€™s not to like?

DG: Well, quite a bit, actually. Although we often talk about the â€œsocialâ€ nature of board gaming, Friday is simple solitaire. All solitaire games have to walk a fine line between being so predictable that they are merely a puzzle to be solved, and so random that the game comes down to mere chance. Friday leans far too heavily on the latter half of it and, while strategy can certainly be present, whether your choices pay off for you comes down to luck of the draw more often than not. Plus, your starting deck is so detrimental to winning even round one contests that the early game just feels punishing - and not in the fun way.

BC: Wow, it sounds like we started from the same premise of what constitutes a good solitaire game--the right blend of predictability and randomness--but came to opposite conclusions about how Friday achieves that balance. I will agree that, at the highest levels of play, randomness will most often determine your success or failure, but luck plays a much smaller role than experience. Smartly, Friese proves this by providing a comprehensive scoring system. (On a side note, itâ€™s often a point of debate whether beat-your-score or a straight win/lose condition makes for a more satisfying solo or co-op, but I think most people would agree that itâ€™s best when you can have both, as Friday does.) If you look at the scores of anybody who has played the game extensively, you will see a steady improvement. You may not be able to survive the first wave on your first playthrough on easy, but over time, you can hit a 50% success rate on the hardest challenge level. To me, this is the very definition of that ideal balance we discussed.

DG: Oh, I agree that you can improve over time. Itâ€™s not entirely random. In fact, as you play you start to learn which options are more likely to lead to positive outcomes. But thatâ€™s just it. That initial exploration of the game lasts a few plays, and then you start to learn what the best choices are. From then on, you make that same proper choice each time and then the cards tell you if you won or lost. After a few plays, the game (or the part where player choice matters) is fully revealed. After that, itâ€™s just simple repetition to see if you were dealt cards that accommodate winning - not unlike Klondike. And, perhaps it does color my perception a bit, but I personally only find the winning condition satisfying. I donâ€™t enjoy playing again just to achieve a higher score. Maybe if I liked striving for a high score, hoping for a random shuffle that produced a slightly better outcome would hold more appeal to me. Do you see more variety or interesting choices than I do?

BC: For me, the game lasted about a dozen plays before the strategy started feeling repetitive, and thatâ€™s a lot more than most games get. But let's take a look at the choices offered:

Every turn, you have to choose which hazard to encounter out of two. You must consider the reward, but also the difficulty, and I don't simply mean going for the easier one. Are you going to try to intentionally bomb the hazard to remove cards from your deck? Are you going to expend s little extra effort to get a strong card early? The main â€œobviousâ€ choice here is that if the survival handbook comes up in the first phase, you should take it.

When you fail a hazard, you have to decide whether to spend extra life to draw more cards, or fail the hazard and possibly remove some bad cards from your deck. This is the only choice that, IMO, becomes pretty much automatic after the first couple of games. You want to spend the first phase removing the -1 and 0 cards, then try not to fail any more hazards if you can help it. Every once in a while you do have to choose between failing a hazard to get rid of an aging card or keeping the aging card to get the new good one.

It is not the deepest game in the world, for sure, but that is one of its strengths. You can take it out on a flight, a lunch break, or just before bed, play it with your processing capacity at under 100%, and still feel like you are making meaningful choices as you play. Itâ€™s a great medium between two other evergreen solo games: Onirim, which is pretty much 100% autopilot, and Mage Knight, which is...well, Mage Knight.

DG: Completely agree on Onirim. And Mage Knight is pure brilliance. But thatâ€™s beside the point. I think youâ€™re right that Friday has about a dozen plays in it (if weâ€™re being a bit generous) before it gets repetitive. And for most modern games, that would be pretty good. Itâ€™s a sad fact that as an adherent to the Cult of the New, many of the titles on my shelf have been played under 12 times.

But thatâ€™s because I need other people to play those games. So that means I usually only get one night each week to try that out. With Friday, I was playing it on a lunch break or even in the evenings sometime. I reached that threshold of repetitive play so quickly that I was done with it in just a few weeks. As a solo game, and one that plays quickly and compactly, it needs to stand up to far more plays than it does. Instead, it provides mild amusement for a very short time and then need never be played further.

BC: Don't get me wrong: it takes a dozen plays for the strategy to start feeling repetitive, but itâ€™s got more than a dozen plays in it. I put it away for almost a year, and when I had occasion to take it out again (it is the perfect size and length for a lunchtime game), it was totally refreshed. The BASIC strategy becomes instinct, but there are still tactical decisions to make and different deck focuses to try. For a solo game of its size and length, I think itâ€™s got a lot more play in it than most. Iâ€™ve gotten around 22 plays from it so far and am not planning to get rid of it anytime soon. And don't forget we are talking about a $10-$20 purchase here, not a $40 big box game.

Simply put, Friday was a huge step forward for solitaire games. A big-profile European game designer and publisher putting out a solo-only game is a big deal, and itâ€™s got a lot more decision-making and â€œoomphâ€ than most people would expect from the player count, especially if theyâ€™ve only played Yahtzee or Klondike. Itâ€™s also an innovator in the deck-building genre, introducing a push-your-luck mechanism to purchasing cards that works perfectly here and I haven't seen duplicated elsewhere, and the additional hazard of those disastrous Aging cards that get added to your deck with every reshuffle, making the typical deck-building strategy of deck-thinning a dangerous proposition here. If I told you that, for under $20, you could pick up a game that has consistently ranked in the top 3 out of all solo games, how could you say no to that?

DG: Bleh. Iâ€™ll say â€œnoâ€ every day and twice on Sunday. The novelty of deckbuilding wore off long ago. The push-your-luck mechanism isnâ€™t so interesting when starting with so many terrible cards. And, while I agree that itâ€™s a step up from Klondike, that doesnâ€™t exactly set the bar high. Iâ€™d much rather play something immersive like Mage Knight. Or, if time and space are factors, perhaps Zulus on the Ramparts which provides many more decision points in a solo title. I wonâ€™t begrudge anyone their joy in Friday, but I find it consistently underwhelming.