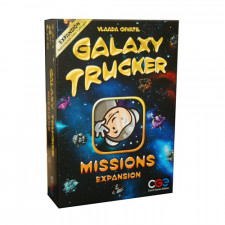 Galaxy Trucker tends to divide gamers into camps of hot and cold. Iâ€™m very hot on it. I love the real-time building aspect as you try to create a ship that will hold together through the journey. I even enjoy the journey itself â€“ which essentially amounts to an extended scoring phase. Numerous expansions have been released, but Missions is unlike anything that has come before.

This expansion draws inspiration from the single player campaign in the Galaxy Trucker mobile app. The idea is that each flight, you get special objectives. Generally, they take the form of components that can be added to your ship that provide a detriment to your survivability.

The expansion adds three new items. The first are the titular missions. Youâ€™ll find fifteen in the game box and each is unique. Simply draw one at random each flight (or you can draw three and choose which goes to which flight) and it provides special rules. For example, it might ask you to transport a certain kind of dangerous cargo. Or it might want you to finish as quickly as possible, while heading through the most dangerous reaches of space.

The second item are the new components. Some missions might ask you to transport megamassive ingots. Each reduces your engine strength by a certain value. If your engine strength falls to zero or below, open space will knock you out of the race. There is also explosive cargo. If it is destroyed, it also takes out every other component around it. Inversely, fragile cargo is also destroyed if any of the eight pieces around it go boom. Thereâ€™s radioactive cargo which prevents any batteries or crew from being placed around it. Finally, there are alien artifacts which can neutralize every component in your ship in a particular row or column.

Often times, the missions will incentivize you to put as many of these bad pieces into your ship as possible. Many will pay you extra credits for each you successfully deliver â€“ or penalize you for bringing too few or losing some.

The final item included with Missions is the super cards. Super cards tend to bring powerful effects that are a step above what youâ€™d normally see. Meteor swarms will hit every piece of your ship on two sides. And enemies or black holes exist which will attack or tear pieces off your ship. Many of the super cards get stronger as the level of the flight increases.

Missions is a phenomenal expansion to an already fantastic game. And itâ€™s made to integrate with however much Galaxy Trucker you already have. It works just fine with the base game. It supports the first and second big expansions. And it plays nicely with other small expansions that have come before.

Another thing that works well is that the new components all have a distinctive purple back. After play, this makes them easy to separate out if you want to play a normal game. But during play itâ€™s even better. The missions often want you to grab a particular component for extra points. Having them stick out makes it easier to build according to the mission requirements.

The best part of the expansion isnâ€™t that it integrates well or that the new components provide interesting effects. The best part is the purpose it provides to the base game. Normally, youâ€™re trying to build a ship that simply survives the flight. Sure you can look at the adventure cards and build toward what you see, but youâ€™ve almost always got the same goal. Now, that is no longer true.

In Missions, you receive definite, concrete goals. Not only do you need to survive the flight, but you need to do so in a way that doesnâ€™t affect your fragile cargo â€“ or whatever the mission directs. In fact, many missions create high risk/high reward gameplay. In one, you might be paid seven credits for every radioactive component that you deliver. But if they blow up, you must pay additional negative credits. Do you play it safe and take just a few? Or do you stock up, hoping to surpass a leader or leave the competition in the dust?

Those concrete goals invigorate the base game. Even though the expansion is quite small, it nevertheless wholly redefines the experience. Playing through the missions, each flight gains a unique feel, its own personality, distinct from anything that came before.

The missions provide very brief flavor text â€“ just a quick blurb. But itâ€™s enough to significantly enhance the narrative of the game. It makes it easier to recall particular moments, and the players laugh long after the game is concluded, at the difficult decisions foisted on them.

This is a fantastic expansion for Galaxy Trucker. If you are at all a fan of the base game, you should do yourself a favor and look into it. Great bits, fun effects, new narrative, and exciting gameplay coalesce into an absolutely wonderful addition.