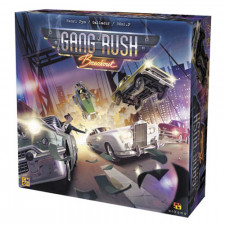 Iâ€™ve been a fan of Thunder Road since the late â€˜80s, back when I was too young to know that it would be a classic, and ended up trading it for a near-priceless (at the time) stack of Ralph Snart comics. The reason I mention this is because while Thunder Road was astoundingly fun, it was truly simple and couldnâ€™t really stand up to a lot of repeated plays before becoming stale. Thankfully, someone got tired of waiting for a reprint and developed a game with the same kind of feel, but one that is far more complex and satisfying. Where Thunder Road was for the kind of person who likes to punch people in the face, CMONâ€™s Gang Rush: Breakout is for the kind of person who liked to trip kids as they were walking down the aisle in the bus. I once heard a game described as â€œa knife fight in a phone boothâ€, and this game takes it to the next level: itâ€™s a five-man knife fight in a phone booth slowly sinking into the ocean, and did I mention that the phone booth is also home to one hundred thirty-five ravenous, rabid rats?

The setting of the game is rather negligible as itâ€™s pretty generic and not incredibly persuasive as a vehicle of narrative; you play one of five 1950â€™s sicarios attempting to return loot to the mob boss in order to gain his favor and become his right hand man. Of sixteen pages of rules, one half-sized paragraph sets the stage for the game. So, if youâ€™re looking for a game where a story is told and adhered to, youâ€™re looking for the wrong Dusenberg. In this game, like most CMON games, the stories told are that of â€œthat one time you managed to whip to the front of the pack and, on a totally lucky roll, bang your buddy Mike off of the bridge and into the ravine below.â€ Bonus points for, â€œâ€¦and I think I heard his eyeballs pop at the bottom.â€

On its face, itâ€™s a simple game about driving cars across a bridge, no more, no less. But once you delve into it, it really is â€œthat kid who likes to trip people getting off of the busâ€ because the whole game is about how hard you can screw over your opponents. Itâ€™s as if every single component of the game, of which there are many and they are all superb and stunning, is designed to cause the ruination of what may soon be your former friends. This is a truly nasty game of cunningly placing objects and police in the way of your opponents while avoiding their unwanted attention, not to mention shooting each other repeatedly. Some of the more clever features of the game are the reversed trap placement order, which allows the last place player to place booby traps first, as well as the very slick dashboard system which helps players easily distinguish their speed and turning ability, which changes constantly.

There are plenty of smart, cut-throat games out there in the market, but what makes this game so truly unique is as much about the design as it is the presentation. This is one of the well-presented games on the market- great cardboard, 3D elements, plastic cars, and comics-style illustrations elevate this game. Beyond that, the way information is relayed to players is clear, precise, and understandable which makes it easier to learn and play. Itâ€™s one of those games that you see being played at a convention and are compelled to stop and take a look, because it is just that damned pretty. As noted, this game features little, pivoting dashboard dials which tracks speed and turning ability that makes playing the game a breeze. My only real gripe is that the small, thin, cardstock money is arguably the worst money Iâ€™ve ever seen in a game. It is equivalent in failure as the rest of the game is in triumph. I understand that it needed to be small to fit inside of spaces on the board, but the fact that itâ€™s thin paper and perhaps a quarter inch by half inch makes it a pain in the ass to pick up and handle; I literally put a pair of tweezers in the box with my copy solely to use these scraps. 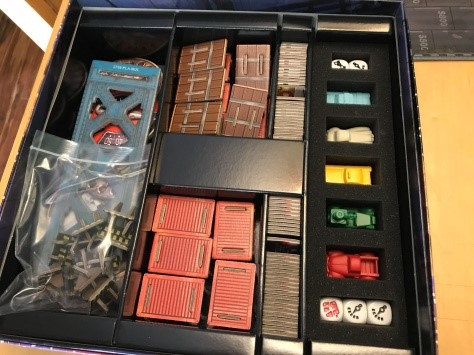 At its core, this is a dice-chucking game as much as anything and the slick, custom dice are both easy on the eyes and easy to understand. Luck is a huge part of this game, but itâ€™s mitigated by smart play and the fact that you get two re-rolls for every roll you need to make. This game has a solid balance between rewarding smart play and small victories through dumb luck, and I really enjoy it. If youâ€™re into vehicular combat, racing, or straight up chaotic fun, this is definitely a solid choice. Itâ€™s even pretty good with three players, which is always a welcome discovery.