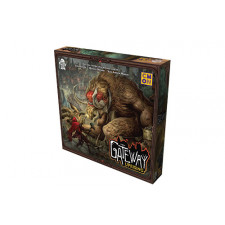 Critical Hits: Fantastic art; compelling setting.
Critical Misses: Derivative gameplay; does not distinguish itself from others in genre.

When you open the box to Gateway Uprising, bizarre creatures that seem to have escaped a Guillermo Del Toro film greet you. Thereâ€™s a Fishmancer, Fishwife, and The Elusive Birdfish. There are cards without fish too, like the Jar Wizard, Kleptomancer, and The Mobile Wizard Tower. With names like these, the world of Gateway instantly grabbed me. Unfortunately, the gameâ€™s fishtastic aesthetics didnâ€™t hold a tight enough grip. 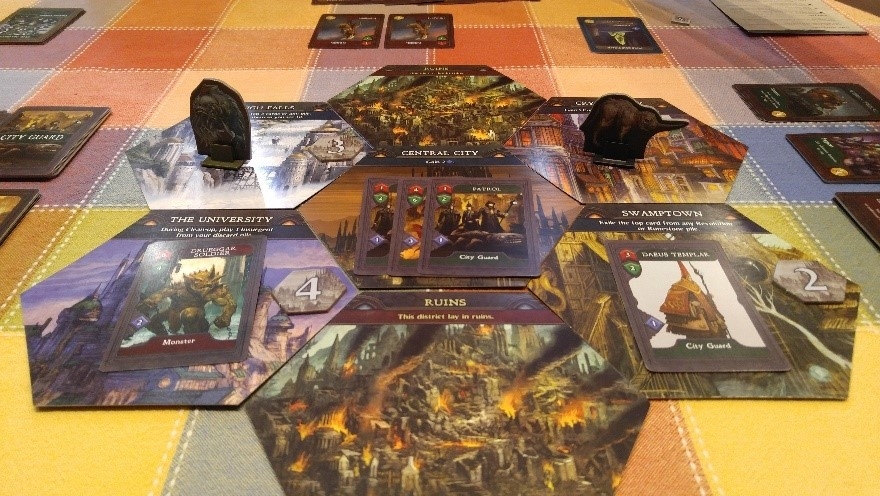 A veritable metropolis of opposing forces.

Playing as insurgent wizards, you must free the city of Gateway from the monster hordeâ€™s invasion. You also need to defeat the city guards. And you need to combat your opponents for control over districts. There are several competing goals here that obfuscate what is really just a run-of-the-mill deckbuilding game. You start the game with a basic deck, consisting mostly of merchant cards (money) and a few insurgent cards (attack). Each player also gets a faction leader that shuffles into their deck and provides a unique power. Donâ€™t get too excited here; these leaders donâ€™t really guide your decisions much in the game.

On your turn, you get two action points. Playing a card costs one action point unless itâ€™s a merchant, which is free. Playing support cards provide various abilities, such as additional draws, trashing cards from your hand, bonus attack, or some extra cash. When you play insurgent cards, they go into your army â€“ a side area on the table where they stay out until defeated. After your actions, you can purchase one card from a buffet of options: three types of merchant cards, two types of insurgent cards, eight revolution cards, and three piles of runestones. Revolution cards are simply the static set of cards you choose for each game. Runestones are divided into three piles â€“ common, uncommon, and rare â€“ with several types of each rarity shuffled together. Runestones stay in front of you, allowing you to use their effects at any time, but then trashing the card. If not used by the end of the game, they will earn you victory points instead. 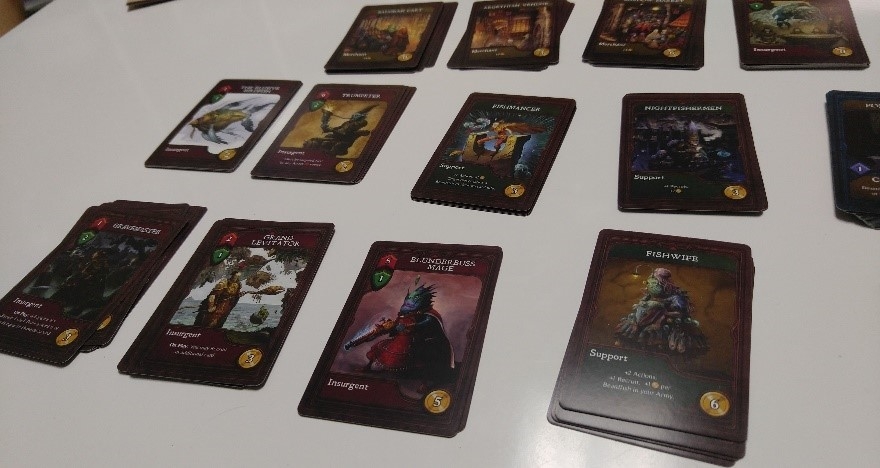 Not quite Pike Place Fish Market, but close.

After being a good little fishy and going to the market, you move on to your attack phase. This is where things get needlessly complicated. Using your army, you choose a district and attack whoever is there, whether itâ€™s the city guard, monster horde, or another player. You then compare attack and defense values, evaluate which cards are defeated, and the victor claims the district and can use its ability. When battling a city guard or monster horde, the player to your left acts as the enemy, determining how attack is doled out to your army. Though the onus on other players is minimal, itâ€™s mostly just bothersome to have to do this. This isnâ€™t the only time players play out of turn. When the city guard and monster hordes battle each other, usually due to events (which Iâ€™ll get to later), then the start player acts as the city guard with a player of their choice acting as the monster horde. Making combat this fiddly is fine if there are interesting decisions within it. For Gateway: Uprising, itâ€™s simply perfunctory.

Once youâ€™ve attacked, any defeated insurgents go into your discard pile while the rest stay out to fight another day. However, itâ€™s not often that you get too many survivors. Though city guards are relatively easy to defeat, the monster hordes have huge attack and defense values, taking most of your army to kill them. Since you have to attack with your entire army, you end up just sending them to attack as soon as you can kill something. Thereâ€™s very little strategy in building your army up and choosing when to fight. Thereâ€™s also the issue of needing money to buy more insurgent cards, getting both of those into your deck, then waiting for the cards to come back up in future draws, and hoping to have enough action points to get them out. This uphill battle belies any sense that youâ€™re creating a cohesive deck. Moreover, after you make an attack and are left with little or no defense in front of you, itâ€™s guaranteed someone will swoop in and take the district from you. Sure, you got to use the districtâ€™s ability on your previous victory, but most of the effects are lackluster anyway. This tedious back and forth isnâ€™t an epic struggle; itâ€™s a lame see-saw. 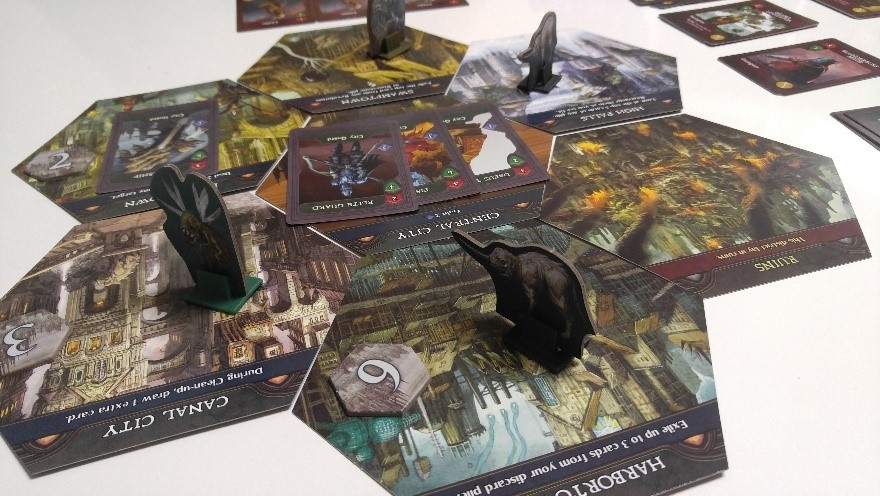 Fear the wrath of myâ€¦ nar-fish?

At the end of the round, an event card will be revealed and its effects are carried out. Typically, events add more monsters to various districts. When three monsters occupy a district, they turn a district into ruins, meaning itâ€™s out of the game. If all the districts surrounding Central City are destroyed, then all players lose. Players can also lose if monsters occupy all the districts, including Central City. In theory, players are incentivized to work together to keep the tide at bay. In practice, my generally game-focused group was discussing comic books and former history professors instead. 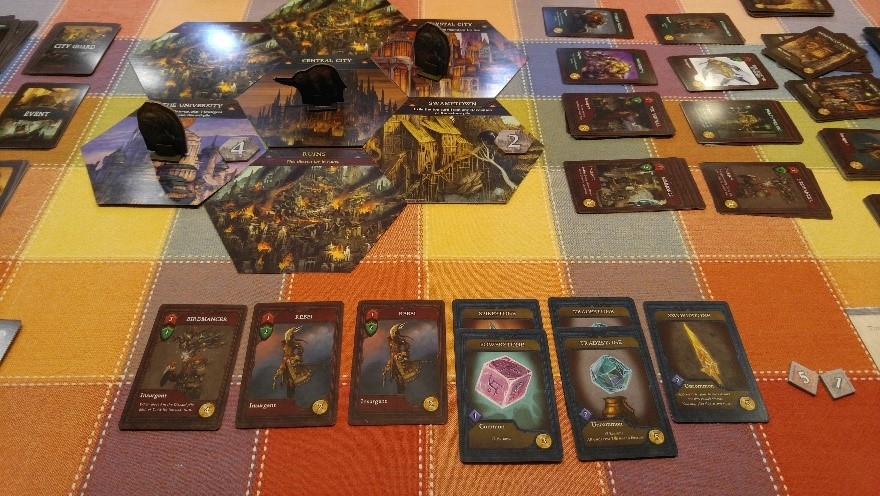 Collecting runestones is probably not the best defensive strategy.

Herein lies the problem with Gateway: Uprising: itâ€™s just not interesting. The deckbuilding is boring. The card abilities are nothing to get excited for, causing you to buy cards just because. The board part of the game stutters, unable to smoothly integrate whatâ€™s happening in your hand with whatâ€™s happening on the board. With games like Clank! and Tyrants of the Underdark demonstrating how well deckbuilding and board play can complement one another, Gateway: Uprising ends up tripping over itself. Assuming the aforementioned losing conditions arenâ€™t met, the game goes on for 12 rounds, feeling like a slog until you can count up your victory point tokens and declare a winner. Sometimes, youâ€™re even hoping for the other win condition of someone controlling all the districts, allowing them an instant victory (though this seems unlikely given how battles work).

This is all a shame because the wonderfully weird-looking world of Gateway and its aquatic denizens sounds great. As the saying goes though, there are plenty of other fish in the sea and my eyes canâ€™t help but wander.