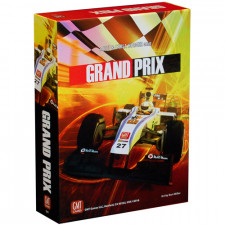 Grand Prix, the new Formula 1 racing title from GMT, is the direct descendent of the best auto racing game I have ever played- Jeff and Carla Horgerâ€™s Thunder Alley. But that game was based on NASCAR-style, â€œrubbinâ€™ is racingâ€ stock car action and this new design from the Horgers takes the card-based gameplay to the open wheel track and opens up the possibilities to include such things like left turns and international teams. There are a few minor yet impactful changes that make for a somewhat faster feel and a very different kind of finish, but Grand Prixâ€™s â€œleast goodâ€ thing is that it still plays much the same as Thunder Alley to the degree where it comes across almost like a variant of the original.

But thatâ€™s not a bad thing, because Thunder Alley was so good. The core racing concept is that you play cards to activate the cars on your team (or, in Grand Prix, NPC cars that you are in charge of moving). The cards indicate a variety of different kinds of movement which may involve moving other cars that are in front of or immediately behind the activated car. These movement types include solo breakaway moves, linking where a car may be leading an activated car but wind up being pulled along by it, lateral movement, drafting and so forth. And some movement cards cause the activated car to take on damage tokens, which must be repaired in the pits. This all not only generates strategic and tactical decision points, it more importantly creates a sense that every car on the track is always moving. I think that this is the key thing that makes both Grand Prix and Thunder Alley the leaders in the genre- everything is always in motion. You might play card and wind up moving half of the field. And then there are event cards to mix the whole thing up with surprise and drama.

Now with much less yellow flag!

The differences with Thunder Alley give Grand Prix its own identity, but I also think that Thunder Alley is somewhat more successful in depicting a very specific kind of racing focused on teamwork and pacing. The new rules include different tire types that can affect your speed. There changes to how pitting works, with certain types of damage requiring longer times- it takes longer to fix an engine than to repair a wing or change a tire. And you can choose which damage to fix, and which to take a chance on letting ride for another lap. Yellow flag restarts are much, much rarer (thereâ€™s only one in the event deck). A new â€œconditional linkingâ€ concept enables cars to move laterally outside of a line they are pushing to break from the pack. And one of the more fun concepts is a â€œclose callâ€ token that keys to certain event cards and can wind up causing risky actions to come back to haunt you.

The new NPC car concept works really well. There are always 22 cars on the track and depending on the number of players (2-11), you will have to budget your movement cards to manage these cars as well as the two cars on your team. So you can use these NPC cars to move your team cars along or to spoil an opponentâ€™s position. Thereâ€™s an interesting strategic angle here that may give Grand Prix just a little more depth than Thunder Alley. 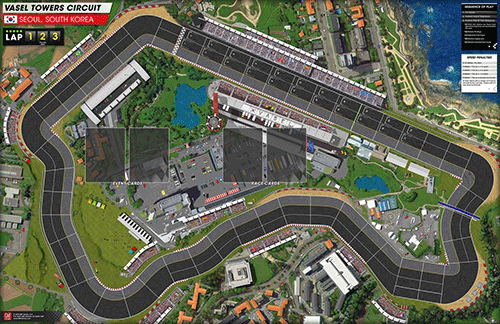 Where is the Barnes Speedway in Atlanta, Georgia? Come on GMT!

But the most significant change is in how you win this thing. Thunder Alley awarded position-based points for each car on your team as well as points for leading laps. Grand Prix scores the top ten finishers and thatâ€™s it. You donâ€™t score for any NPC cars in the top ten, just your team cars. So ideally, you want to push your two team cars to the lead and stay there for the entirety of the race. Thereâ€™s less of a sense of trying to balance activations among three or four cars to get the most points as there was in Thunder Alley. Iâ€™m of two minds about this change. I like the more direct â€œwin the raceâ€ concept that strictly awards only the top competitors, but I kind of miss the points-based finish that awards the overall racing performance across your entire team.

Both Thunder Alley and its descendant Grand Prix are superlative racing games. I actually prefer Grand Prixâ€™s F1 events, which may be heretical because I am a Southerner. But I think Thunder Alley feels like a somewhat cleaner, clearer design that homes in on just the right amount of specificity to fully portray what stock car racing is all about. But then again, I like that Grand Prix plays a little faster and feels a little faster. And I do like the new rules for the most part and I think the event cards play a little better in the new title. The good news is that the games are actually compatible so if you canâ€™t decide on one, you can always add the other almost as a kind of expansion. You canâ€™t go wrong with either game- they are the best of the best as far as racing games go.