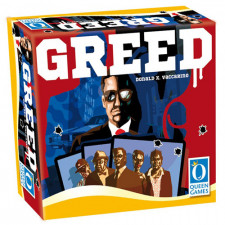 You thought I would open up with a Gordon Gekko quote didn't you? Greed is such a slick little beauty that gimmicks aren't needed to prop this sucker up. It's another card game designed by Dominion's legendary creator Donald X. Vaccarino, albeit one that actually possesses a degree of theme and oozes a bit of cool as play progresses. When you combine a classic gangster setting with smooth mechanisms that keep you coming back, you have an underrated winner that people need to be playing.

One of this game's greatest strengths is its simplicity. Players draft cards 7 Wonders style into a hand they own. They then select a card from their hand to play and simultaneously reveal. Cards consist of Thugs, Holdings, and Actions. Holdings and Thugs stay in play with the former gaining development tokens upon placement that are worth large coinage at game end. A series of symbols on Holdings and Thugs represent requirements to play future cards as well as combo generators to earn more profit. The name of the game is Greed and you win by hoarding cold, hard cash.

Actions trigger special effects and can sometimes result in significant changes on respective tableaus, such as causing each other player to discard a card from play or cough up some dough. There's certainly a degree of interaction from this â€œtake thatâ€ play in addition to the fact that you will draft more cards into your hand than you will play over the course of the game. This promotes aggressive drafting where you take a card simply to stop the next guy from getting it.

The pool of cards from which you draft remains constant the entire game. This provides for some interesting analysis. Since there's no second or third cycle with new or refreshed decks, you can angle for a particular combo early and grab a card you plan on using later. Alternatively, you can leave a really useful card in the pool hoping no one else will grab it since it won't directly benefit them. This can come back to bite you as you start cursing another player for taking that card which perfectly combos with your streetwalkers.

A subtle but provocative layer exists concerning the timing of resolving cards upon their reveal. Each card possesses a number in the bottom right corner and resolution occurs in ascending order. This is extremely important to realize as your effect of stealing a Thug from another player won't affect me if the Thug I'm tossing down doesn't actually enter my tableau until later in the round. This jockeying for initiative of when special effects trigger results in a guessing game of sorts and the actions themselves certainly play into this.

One of my absolutely favorite aspects of this design is the fact that only a portion of the deck is used each play. This is something of a Donald X. signature â€“ a broader range of setup options are available than are present in a given game. Players are each dealt 12 cards from an 80 card deck, meaning you can never quite predict what will show up. Some games will have wicked action combos, others will be Thug heavy and some will be flush with Holdings. There's a feeling-out process and a sense of discovery that organically arises in a quick and smart 30 minute affair.

There's also a very thoughtful feedback system occurring here between the player and the mechanics. The game is so easy to play that you find yourself immediately getting into the strategy, managing a finite selection of powers and approaching the game down a selection of set paths that the cards lead you to. Identifying these combinations and clever ways to use cards, while trying to mess with the structure of your opponents and keep strong cards away from them, is a very rewarding experience. The way action cards fire off and reap benefits in conjunction with the many opportunities to combine different effects immediately and often make you feel clever. It has that Love Letter quality of continually patting you on the back and praising your smartness.

Greed is not a game that pushes you towards agony, requiring you to fulfill needs or manage resources just so you can get a single opportunity to do what you really want to. It's a game that continually grants permission for enjoyment and has a free-wheeling open air atmosphere as if you're riding in a convertible with a Tommy gun propped up on the dash. This is a game that requires no effort to get to the table so I have to ask - why is your dirty mug still here?