Gruff is yet another game in the vein of battling with cards that represent magical spells and protecting yourself, or in this case your Shepherd, from losing their life points. While it has the capacity to allow up to four players to brawl against each other at once, like most games of its ilk Gruff seems to play best as a duel between two goat-controlling madmen. If youâ€™ve played one of the countless games where card play simulates wizards blasting each other to bits, youâ€™re halfway to understanding this game. Unfortunately the second half of the journey is a stretch.

There are fiveâ€”yes, FIVEâ€”types statistics to keep track of between your Shepherd and your goats. And theyâ€™re not intuitive. Statistics like damage, defense, and spell casting fuel have names like â€œMeanâ€, â€œFatâ€, and â€œWeirdâ€. Except when â€œWeirdâ€ is also â€œCrazyâ€. Thatâ€™s right: one statistic has two different names; confused yet? I was and Iâ€™d had the benefit of reading an eight-page rulebook three times from cover to cover. 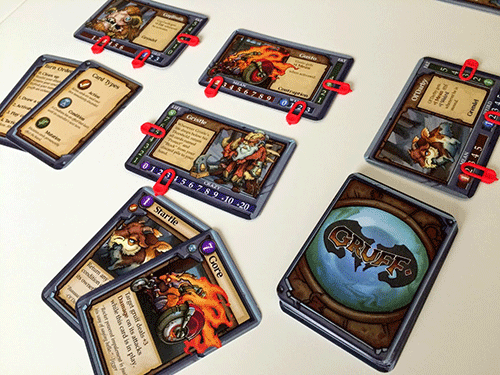 Goats are your Shepherdâ€™s weapons and tools of destruction. All three of your chosen goat combatants are in play from the beginning of the game, replacing the summoning of monsters and allies present in most card duels. Youâ€™ll build a deck of twenty-four cards from a selection of single-use effect action effects, one-turn buff effects, and permanent mutation effects that come with each goat and tuck the other cards away for a future game. Cards are primarily buffs for your creatures and a few â€œtake thatâ€ weakening or hindering effects against your opponent. Attacks are always made via a goat, whoâ€™s â€œMeanâ€/damage value can skyrocket with the proper amount of time and well-planned card combinations.

Turns go back and forth quickly. A declared attack doesnâ€™t resolve until the opponent takes his turn and either positions his own goats to optimally defend himself, or ignores the attack and makes an offensive move of his own. Once a player goes on the offensive it can be difficult for his opponent to get out of defensive mode without losing his own goats and suffering damage.

While this sounded strategic and clever on paper, in play it is tedious and predictable. It feels like the only variable to which goat will attack is spell cards played as enhancement. Otherwise the best offensive move is always to attack with a goat where the difference between Mean and Fat is greatest and sneak some damage through to the opposing Shepherd. The unusual theme might have been a fun saving grace to such repetitive play if varying art had been used, garnering a few laughs at goats blasting each other with Flame Jets or executing Spin Attacks. Unfortunately spell cards for each goat have identical art to the goatsâ€™ character cards.

Gruff might be a game whose nuances and strategies reveal themselves to players after several plays. It takes some familiarity to effectively experiment with goat and Shepherd combinations, to sort out which spells to add to your deck, and which cards to play at which time. In my case the game overstayed its welcome after the tenth time a really â€œMeanâ€ goat bounced ineffectually off a defending â€œFatâ€ goat. Itâ€™s an experience that doesnâ€™t foster a desire to learn the game more intimately and find those fun combinations or unique and meaningful decisions.