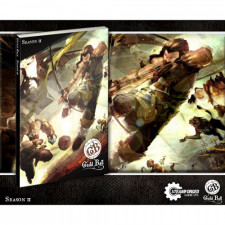 The crowd goes wild as a player celebrates a scoring goal. Across the pitch, a player on the other team buries a meat cleaver into his nearest opponent. High stakes international soccer match? No. This is Guild Ball, a fantasy infused miniatures version of a medieval soccer precursor with less rules and more injuries.

Iâ€™ve grown to enjoy American Football over the years, but it canâ€™t get my little Guatemalan heart beating anywhere near as fast as soccer can. Thereâ€™s fluidity to soccer not present in most spots. Teams surge up and down the field pushing, pulling, feinting, and attacking as they seek an elusive goal. Guild Ball manages to capture this while ramping up brutality to a level necessary to justify a team of Butchers taking the field with cleavers and dirty knives.

Thereâ€™s no diving to the pitch, clutching your shins over an imagined hit in Guild Ball. When your half-machine Engineer hits the ground itâ€™s because heâ€™s just taken a hammer â€“ or a rampaging bear â€“ to the chest. Teams will take to the field with chemical bombs, traps, fierce animals, and even explosive beer. The stakes are high, as the guilds represent the true power in The Free Empires and Guild Ball is one of the few outlets for aggression left after the Century Wars. 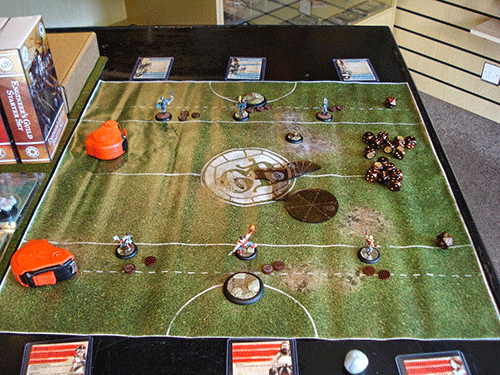 Already in Season 2, Guild Ballâ€™s story is one of bargained peace. Of money-hungry guilds bringing tranquility to the land only after centuries of war cut too far into profits. The players are but pawns in the games of leaders and rulers. Fluff yes, but fluff with gameplay impacts. Corsair, the Fisherman captain removed from both his foot and the pitch in Season 1â€™s story, returns in Season 2 with a wooden leg ready to lead. Spigot, a brewer more apt to bash your skull in than score a goal, enters Season 2 with an alternate â€œVeteranâ€ model. Now sober, heâ€™s ready to show he can play ball as much as he can beat people up.

None of this matter if the game itself is not compelling, and fortunately Guild Ball is fantastic. Building a team and playing is deceptively easy. Guild Ball eschews the typical miniature game convention of calculating points and balancing upgrades with models in a quest to eke out some arbitrary numerical value. Instead youâ€™ll choose a captain, 4 players, and a mascot. Mascots donâ€™t dance inanely on the sideline. They aid their team directly, either through tactical benefits or by taking the occasional chunk out of an opponentâ€™s leg.

Once on the field, an I-Go-You-Go system keeps the game incredibly dynamic. A great coach will have a great game plan for each round, and itâ€™s important to keep strategy in mind. However, when your opponent can trigger a series of bonuses to run two-thirds of the way down the field or drop an entire forest in the middle of the pitch, the winner is going to be the player who can react to the changing game as you play..

Part of what makes the game simple to learn is the fact that you donâ€™t need to learn new rules for each team. Whether you want a team that plays football or footbrawl, youâ€™re not learning different systems. Everyone attacks the same way: by rolling a pool of dice determined by base stats and a few modifiers. After determining the total number of hits, youâ€™ll consult your modelâ€™s unique Playbook. Simply stated, more hits donâ€™t necessarily mean more damage. They mean more options.

The playbook of a team that wants to bash your face in is going to have damage effects available earlier in their book. Conversely, a team like the Fishermanâ€™s guild that excels at scoring is likely to have tactical movement and ball control abilities more readily available. You can see at a glance what your team is good at and what your opponent is capable of. 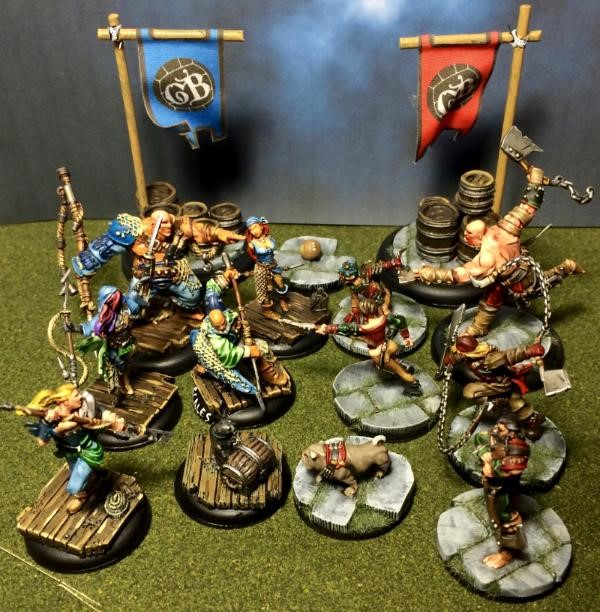 This streamlines the learning process, making it easy to dive into the game. Of course, getting good is much tougher. It was rather humbling to end my first game grumbling about 2-3 slow turns before the â€œgame gets goingâ€ only to get punished by an experienced opponent following up a turn 1 takeout with a turn 2 goal. There are a lot of synergies to discover and unlock, with seasonal releases keeping things fresh. The Brewers are never going to be as good at the kicky-goal parts as the Fisherman, but opting for some of the Season 2 releases will provide a new experience without having to invest in an entirely different team.

Guild Ball impressed me. After I dusted off my paintbrushes and super-glue, I was up and playing quickly. Iâ€™m getting better every game but still feel like Iâ€™m only scratching the surface of what the game can provide. Few games have captured my attention in the way Guild Ball has; itâ€™s already great and has a bright future ahead of it.