I played the original Guildhall maybe 4 years ago now, in a hotel room in Vegas, with a buddy. At the time, I was far less inclined than now to like card games. But I still enjoyed it although the icons and whatnot messed with me and took something away from the experience. Alderac Entertainment Group has come out with a new spin on the old bird, and has done so splendidly. Guildhall Fantasy has become the most-requested game by my friends and family since I got it, and we've played the hell out of it. It's not a very complex game, from a rules standpoint, but the interactions between the cards and opposing tableaus is such that it's more than the sum of its parts in tangible ways. 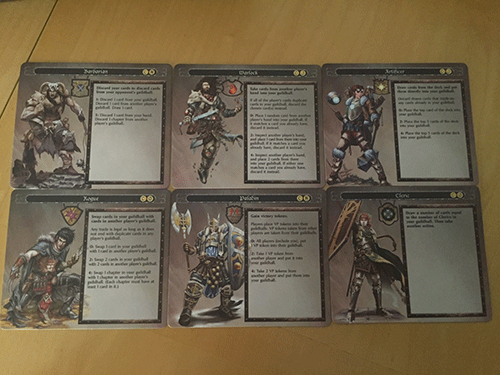 The premise of Guildhall is that players act as medieval versions of a temp agency, who are trying to recruit fantasy professionals into their guildhall so that they can send them off to do adventures or whatever it is that medieval fantasy professionals do. In practice, though, it's a set collection game where you're trying to fill your tableau with five colors of six suits of cards, where the suits are professions. The action takes place in the tableau, though, as when you play a card to your tableau, it activates the entire stack of cards and provides you an instant ability, which many times involves messing with opponents' tableaus.

The ultimate goal of the game is to trade in completed sets for the five, constantly-refreshing victory point cards in the middle, some of which also provide you an instant action or ability. There's constant back-and-forth between players' hands and tableaus, and once you've played a few times, it's a very, very fast-playing game. Thankfully, the small rulebook has a guide for the icons on the back which serves as a reminder to tell you what each profession's power does, and in addition, each profession has a detailed reference card that goes verbatim into exactly how their powers work, including the timing. It's a well designed system.

What is really slick is how they've packaged the game system: Without changing any mechanical rules, they've broken what would be 360 cards over 18 professions and five colors into three small-box sets of 120 cards over six professions. Each box is a standalone game that can be played all by itself, and if you choose to buy additional sets, you can mix and match professions to tailor your decks into what you want the game to play like. It's really smart, because what it has allowed us to do is to make three custom decks of 120 cards that fall into three categories, "Nice", "Some Screwage", and "May Cause Divorce". Of course, if you wanted to be more spontaneous, you could keep the reference cards aside and at the beginning of a game, simply draw six of them, and then build the deck based on the results, which we've done, and it creates an environment where you have to think on your feet. What astounds me is the amount of variety among the professions, which serves to ensure you never get completely comfortable with any one given strategy. There are some professions which allow you to swap cards from your opponents' tableau into your hand, some that give or take away victory point tokens, some that give you extra turns, and others which allow you to manipulate the draw deck. Basically, they're all very different in one way or another and that variety really breathes new life into every session.

Another great thing about this game is that it scales very well; I've played with two, three, and four players, and the game doesn't create kingmaking opportunities. It's a very cut-throat, fluid experience and because each profession has four full sets of cards, you don't really end up sitting around waiting for that one-in-a-hundred card to pop into your hand. This is one of the game's strongest design elements, because the draw and discard decks are constantly changing and evolving as guilds are being traded in for victory cards, and they're both accessible to players through many of the professions. So, if you saw that a card you want got discarded, you'd seek to play a profession like the Wizard who allows you to peek through the discard deck and take it. Alternatively, if you see that an opponent did that very thing, you can play a profession which can steal it from their hand, kill it from their hand or tableau, or otherwise ensure that the card never sees the light of day.

The three packs are called "The Alliance", "The Fellowship", and "The Coalition", and there's also the aptly-named Box of Holding which you can get in order to store the three packs, and it comes with a small box to hold the rules and reference cards. If I had to choose one, I'd pick the Alliance box to start, because I think it's the most balanced between nice, nasty, and truly evil professions. It's probably the easiest one to learn the game from as well. However, I also really like the Fellowship box because it has some that are really fun to play with, like the Sorcerer who allows you to kind of recycle cards for free when you cash them in. All in all, though, I think each box has its own unique blend, so if you felt like just leaving them as is and rotating the box sets in and out each session, you'll be just fine with it. 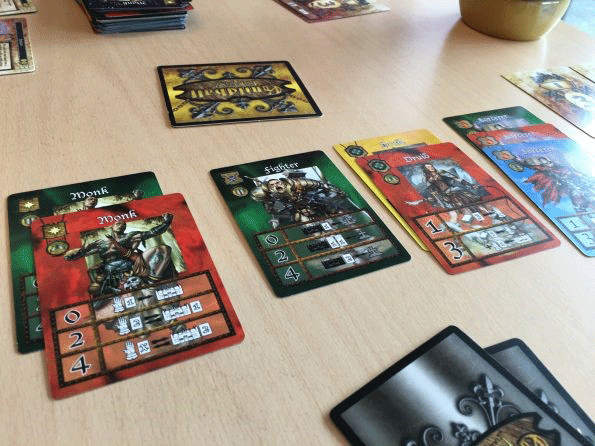 Between the really nice art, the fast play, and the wide variety of powers that the professions enable, it's simply a fantastic game that I highly recommend. Each box is small enough to keep in a glove box, so it's great for people who have friends at work that like to play games with you over lunch. The only complaint I have about the game is that there's a lot of shuffling involved, which is no big deal, and if you want to do the random selection of professions each time you play, you're going to be doing a lot of sorting of cards before you can play, which is why I decided to keep three perpetual decks going. Still, you're not going to easily find as much bang-for-the-buck with other games, because it's a hell of a good time.