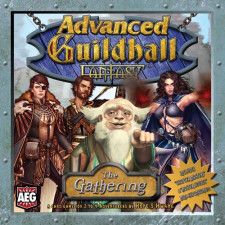 If youâ€™ve read my thoughts on Guildhall Fantasy you will know that Iâ€™m a massive fan of the AEG's Guildhall series including this latest "Advanced" expansion. While the six new profession decks are completely and seamlessly compatible with the previous three sets adds some minor but very slick mechanics which take an already great franchise to a new level of greatness. It's a must-have set.

Without repeating the analysis of mechanics from my previous review, the new professions are really new. The other setsâ€™ professions were essentially reskins of professions from the non-Fantasy Guildhall games. The new ones are similar in scope to some of the existing ones, but differ in the powers they wield and how they are implemented. The Duelist, Invoker, Warlord, Arcanist, Alchemist, and Avenger are a sort of alternate version of existing professions without being so similar that it would be a total waste of money. For instance, the Arcanist is similar to the Warlock from the Fellowship set in that it allows you to see cards in the draw pile, but instead of adding them into your Guildhall you put them into your opponentâ€™s action area thereby forcing them to do something they may not wish to do. Then you can place any unutilized cards back on the draw pile in any order you wish, potentially denying the next player something they want.

Another example is the Avenger, who allows you to take a number of cards from an opponentâ€™s Guildhall and move them to that opponentâ€™s action area. Once your Avenger Guildhall is buffed, you can stuff them back into their hand instead, which is a significant setback. What makes this particular set more invaluable than the others has more to do with the â€œmini-expansionsâ€ and new rules, which are more modifications of existing rules than legitimately more stuff to learn. 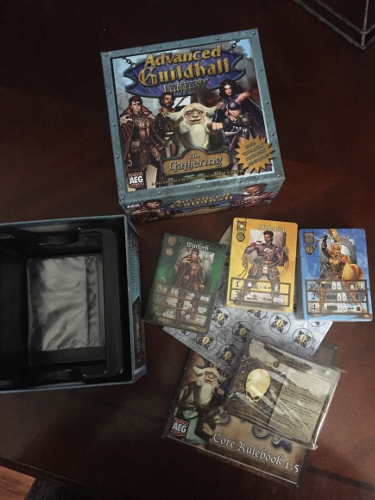 The first expansion, the Master Houses, makes scoring victory points even more powerful. Normally, when you fill out a Guild, you can exchange it for a VP card which brings you closer to victory. With this new mini-expansion, the VP cards sit partially on top of a Master House card, which then become linked to the Master House card. Each of these has an icon that matches one of the six main genres of profession and when you convert a completed Guild whose icon matches one of the three Master House icons you get the VP card and you immediately get a special, one-time use ability. Itâ€™s not a total game changer, but it makes the game that much more deep.

The other expansion, Chapter Masters, is made up of new â€œwild cardâ€ sort of professions which can be used to fill in a hole in one of your Guild. These also have unique effects which can be used when you play them to your action area, prior to joining the Guild. In short, both expansions add something new and I like both of them quite a lot- especially when you mix some of the new professions with other professions from the other sets.

With regard to rule changes, the big one is that you may now use multiples of the same profession in the same turn. Not only does this tend to speed up the game considerably, it also allows you to stack multiples of an effect, sometimes for devastating and memorable effects. All in all, if youâ€™ve never played before, I still think that the Alliance box the best learning set because most of the card effects are relatively straightforward. Despite being billed as "advanced," this set would certainly be a great starting point for new players. It's a standalone edition with all of the latest rules as well as the expansion material which will invariably become an integral part of the Guildhall Fantasy system.