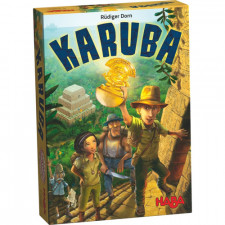 You might automatically associate HABA with high quality childrenâ€™s games in brightly colored, yellow boxes. But the German publisher has just put out three new slightly more advanced games here in the US and itâ€™s a trifecta of family fun. Each of these new titles boasts a sticker announcing that they are â€œGame Night Approvedâ€, and I think any one of these excellent titles is a perfect fit for mixed gaming with children and adults. Iâ€™m not sure youâ€™d want to bring any of these out with more serious, hardcore-minded gamers, but for adult casual players and those who appreciate the classic â€œGerman-styleâ€ board games that were popular in the late 1980s and through the 1990s there is still plenty to enjoy without the kids at the table.

Adventure Land is a Wolfgang Kramer/Michael Kiesling design with artwork from Franz Vohwinkel- so it has a pretty impressive Eurogames pedigree right there. This is a simple fantasy adventure game that finds players moving multiple hero meeples in their respective color across a kingdom imperiled by fog-dwelling monsters. Everyone starts in the northwest corner of the board, and each of the two moves you make on a turn, which can be as far along a straight line as you like, must be either easterly or southerly- no going backwards. Eventually, everyone winds up at a castle in the southeast corner. But along the way, the heroes will pick up swords, herbs and companions to help them battle monsters. All of these elements (including a Water Sprite that travels along the river, leaving gold behind but also eliminating curious adventurers hanging out near the water) are spawned on the board by drawing two cards each turn, which provide the coordinates for where they appear.

And thereâ€™s dice! Combat with the monsters is resolved by players using any sword tokens theyâ€™ve gained to add dice; companions, herbs and gold add modifiers. Each of the fog monsters has a target number and itâ€™s an all or nothing battle- win, and you keep the token for points. Lose, and your adventurer and any companions are off the board.

The game has three scenarios that scale up in complexity not by changing the rules, but by altering the scoring and victory conditions. This is kind of brilliant. The first scenario features more immediate scoring and no bonuses for things like having the largest group of adventurers at the end, but the third scenario offers majorities and more strategic methods for earning points. My kids donâ€™t quite grasp long-term planning for having the most of something in a game yet, but they totally get the simpler concepts of picking up things to help them fight monsters.

There is definitely some depth to the game. Planning moves, looking for opportunities to grab resources, and being cautious not to move your adventurers to far along early in the game make for some fun choices. This is a neat little game that anyone can play, and it surprisingly captures a strong sense of the typical adventure game setting without bogging down in minutiae or unnecessary detail.

Karuba also offers a simple, classically German design from a respected practitioner of the form. Rudiger Dornâ€™s work here is essentially based on Bingo at a conceptual level- one player (an Expedition Leader) draws a numbered tile, all other players place the tile of the same number from their personal stock on an individual grid. But the novelty here is that the player may place it anywhere, provided that it maintains its correct orientation. Each of the tiles depicts a pathway through an uncharted jungle.

More than that, there is a storyline here that drives the gameplay. Each player has four explorer pieces that are placed on the beach side of the board and four temple pieces placed on the opposite side- deep in the jungle. The idea is that you want to lay pathways that will enable you to move the explorers through the jungle and to the temples of their corresponding color. Getting an explorer to the appropriate temple first gets you more points than the next player to make it, so thereâ€™s a race element at work. Along the way, they might pick up gold and crystals to add to their final score. But in order to move, you have to decline to place the tile drawn by the Expedition Leader in exchange for travelling as many tiles as there are pathways on the discarded piece.

So each player is free to develop their own pathways, even though the initial setup of explorers and temples must be the same for each player. This means that each tileâ€™s arrangement of pathways has differing utility between each player. A left-turn piece might be just what one player needs but completely useless to another. Itâ€™s not a terribly competitive or particularly involved game, but it has an easygoing sense of fun and a â€œjust rightâ€ sense of engagement appropriate for a family-focused design. My family has really enjoyed Karuba- especially the â€œlightâ€ Indiana Jones setting and fun character illustrations.

But I like the illustrations in Spookies even better, itâ€™s a lovely looking little game that I expect to see a lot of play around Halloween. Designed by Stefan Klos (Beasty Bar), this ghostly game of gambling is obviously deeply in debt to Canâ€™t Stop, the classic Sid Sackson dice game. Itâ€™s a little gentler and a little more concrete than Canâ€™t Stop, but it retains the escalating stakes and exciting die rolls that have made that game a family favorite for decades.

On your turn, you roll a friend die depicting four kids and a dog (as well as a â€œwildâ€ result). The kids are all at the bottom of the board, outside the gates of a spooky old house. You take your selected pawn (a big, chunky HABA-style piece with full color decals on it) This tells you who is going to be moving. Then you decide if you want to roll two, three or four dice, with your highest two rolls compared to the target number to move into the next level. But the more dice you roll- i.e., the safer you play- the less Spookies (points) youâ€™ll catch. In other words, the payout is greater if you take greater chances. You need only a five or better to walk through the gates. Are you brave enough to keep going? You can stop at any time, or keep pushing your luck to try to earn more points as you ascend through the house.

Thatâ€™s the big decision youâ€™ll make repeatedly in Spookies, and the target number of each floor of the house escalates until you are looking at trying to roll an eleven or better up in the attic- where you can earn a whopping 16 Spookies if you take a shot at it with only two dice. The penalty for failure is quite soft, but it doesnâ€™t feel like the stakes are any lower because of it. If you miss the target number but hit the number of the floor you are on, your turn ends and the kid stays put. If you roll under the target number, the kid runs out of the house and leaves a Spookie token behind on each floor they run through. So if you banked more than that penalty, you still make a net profit.

But those left-behind Spookies also become a dare. If you roll with two dice and clear a floor, you can also take any tokens that were dropped. Itâ€™s always tempting, particularly if there is a nice bonus pile for you to possibly snatch up. The thing about the Spookies is that their actual value is hidden until the end of the game, so you might grab those three tokens and they turn out to be one point each- or they could be three or five points each!

Obviously, this is a very luck-heavy game that the dice averse will not think too highly of. But there is quite a lot of subtle strategy in the decision-making, especially if you roll the wild result. With that, you can choose to move a kid way up in the house from previous turns- at a greater risk- or start from the bottom and work your way up. Choosing when to gamble, mitigating potential loss with greater profit in the lower levels of the house, and playing the psychological game (meaning, persuading/shaming/haranguing your opponents into making bad choices) make for an easy to play yet compelling experience.

My kids love this one, and of these titles I think itâ€™s their favorite. We had some issues early on with learning about risk-taking and dealing with adverse results (â€œI want to roll againâ€) and there was one fit pitched, but now I think they get it and itâ€™s one weâ€™ve been pulling out for a 20 minute family event before bed.

All three of these games are excellent, even if a touch anachronistic. These are the kinds of family games that were such a big deal coming out of Germany 20 years ago, before hobby gaming got to where it is today. They are very back-to-basics in a lot of ways, and that makes them ideal for families with children. It also makes them feel quite refreshing and fun-first in a way that many more complex, hobby-focused titles are not. I am also very pleased that these games are all made in Germany â€œwith respect to people and the planetâ€- a nice change of pace from the lower standards, lower quality control and lower sense of responsibility evidenced by publishers manufacturing everything in China.

Heed the sticker. These are â€œGame Night Approvedâ€ for good reason. HABAâ€™s latest are fun, colorful and exciting games anyone can learn, play and enjoy.