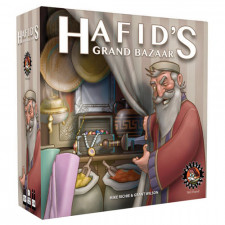 â€œIâ€™ve got wood for sheepâ€ is likely the hobbyâ€™s most quoted inside joke, even once gracing a popular nerdy primetime sitcom. Emerging from a classic German game in which trading resources is a central tenet, the quip is now so ubiquitous that it elicits little more than eye rolls. Not just because itâ€™s stale, but it wasn't very original in the first place. Creative negotiating games get players outside the box. They donâ€™t limit you to exchanging components. Like, â€œIâ€™ll gladly wash your car Tuesday for some frankincense today!â€

Hafidâ€™s Grand Bazaar is an intriguing mashup of bidding, trading and set collecting aimed at, judging from aesthetics and structure, families and casual gamers. Indeed itâ€™s a good introduction to at least bidding. Games that employ multiple mechanisms typically strive for a â€œforestâ€ approach that seamlessly blends elements so that it never feels like youâ€™re going from one to the next. Hafidâ€™s is more of a â€œtreesâ€ experience, whether unintentional or by design. It may leave veteran gamers feeling disjointed, but the delivery suits its targeted demographic better.

Thatâ€™s because bidding and negotiation can be problematic. There is hidden nuance to assigning things value that often leads to overpaying or over-exchanging for a desired object. Or by fear of giving too much, one might underbid only to be beaten out. Bidding can also lead to spitefully artificial inflation as one drives up the cost of something that they have no desire for, simply because they know another opponent dearly does. Of course, this creates strategy and interaction, which are reasons the mechanism is attractive. On the other hand, it can frustrate the uninitiated â€“ and especially kids.

Hafidâ€™s Grand Bazaar successfully employs bidding in a manageable way. Itâ€™s by turn, via cube placement and completely open. The orderliness allows players to process developments, but still retains the tension inherent to auctions. Each round begins with bidding. Players have six cubes apiece and alternate placing one or more to a location. Some areas determine the order in which you choose caravans, which provide goods that you must collect to sell. A few spots provide special abilities to their winners. Three others allow you to sell particular sets of goods for varying amounts, although these are not actually auctioned off and are available to multiple players. 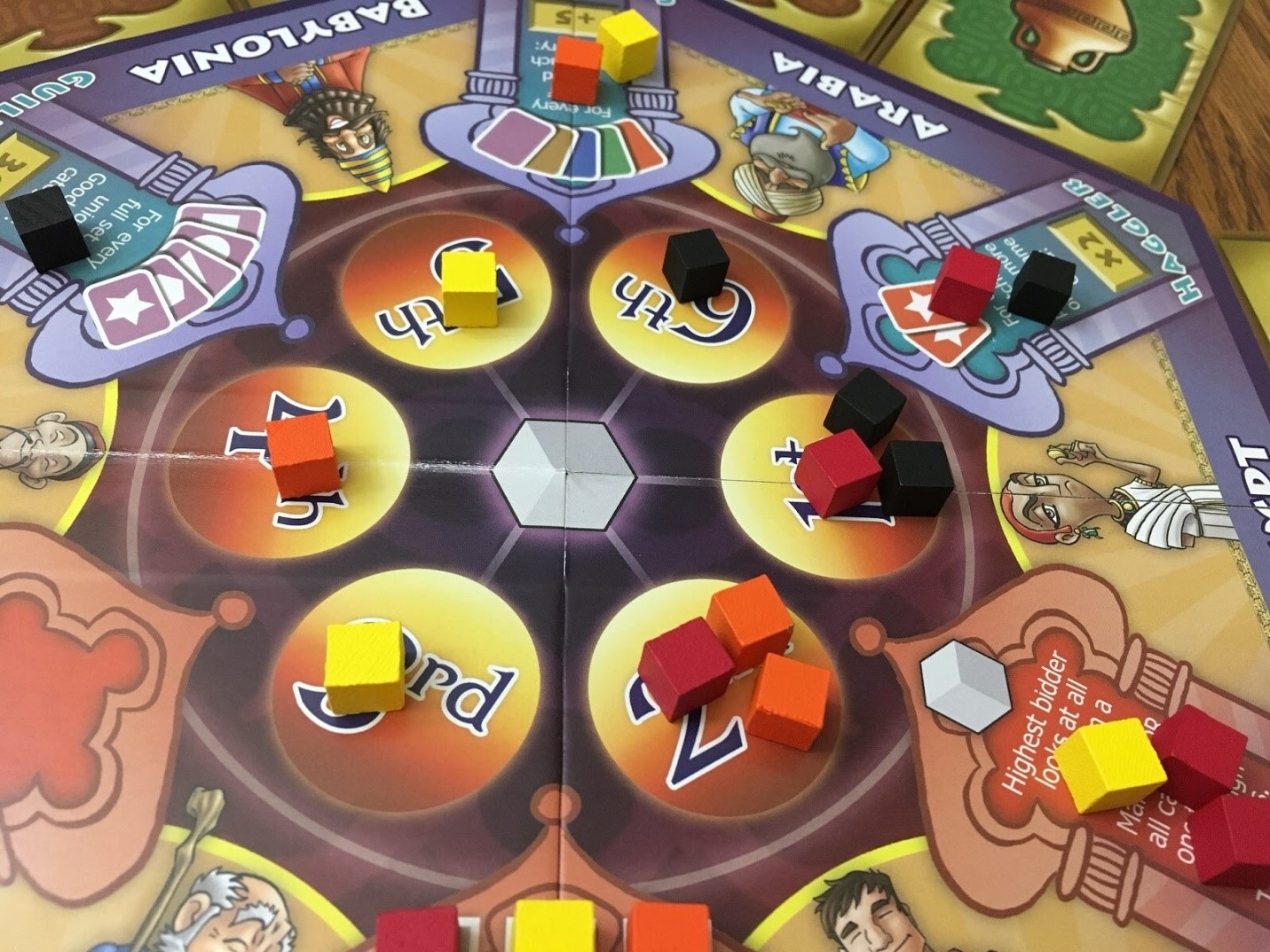 This limited scope is a great way to acclimate the unfamiliar. Your six bidding cubes are further restricted by the likely event youâ€™ll retain one or two for a customer to sell your wares. Even if you forgo a round of greater profits, youâ€™re still confined as to how much/often you can outbid your competitors, thanks to the finite cubes. It wonâ€™t be often, lest you impede your progress elsewhere. Yet the maneuver is still possible, maintaining the principle competitiveness without seeming cutthroat â€“ or at least overbearing.

With its tidy bidding and familiar set collecting, the negotiation element has rich soil to bloom - if players use a little inventive fertilization. Iâ€™m a little surprised to see the mechanic so central in a family-style design. Negotiating can be just as frustrating as bidding. It involves social skills not everyone has, requires decisions based on limited information, can encourage backstabbing and may even encourage tag-teaming.

The implementation here is potentially introductory. It happens at specified points and all deals are channeled through one player who bid for the right to be negotiator. I suppose that person could â€œgang upâ€ on another by leaving them out of deals, but that limits his/her options. And the rules specifically prohibit lying, stealing or bailing out of contracts, averting underhanded backstabbing.

Still, the design encourages broader metagaming â€“ in the real sense of â€œoutside the game.â€ This requires players to be creative. Sure, the negotiator can simply trade cards one-for-one or sell goods. The rules mention dealing in customer access. Beyond that you can engineer multi-card trades, three-way deals and promises of future profits or acquisitions. Maybe even coax later bids or divide up the bazaarâ€™s â€œturf.â€ Or for wholly original deals, you might sweeten the pot with promises outside the game! Beware who youâ€™re playing with when taking things to that level, though!

The scope, influence and entertainment of this phase is dependent on your groupâ€™s personality. And this is one design in which player count really makes a difference. In the right setting it can considerably enhance the experience. Without that inventive â€œspirit,â€ trading quickly turns into a protracted exercise of Go Fish. While families may be fine with that, it lacks boisterousness, proving problematic for a design with negotiating central to its conceit. 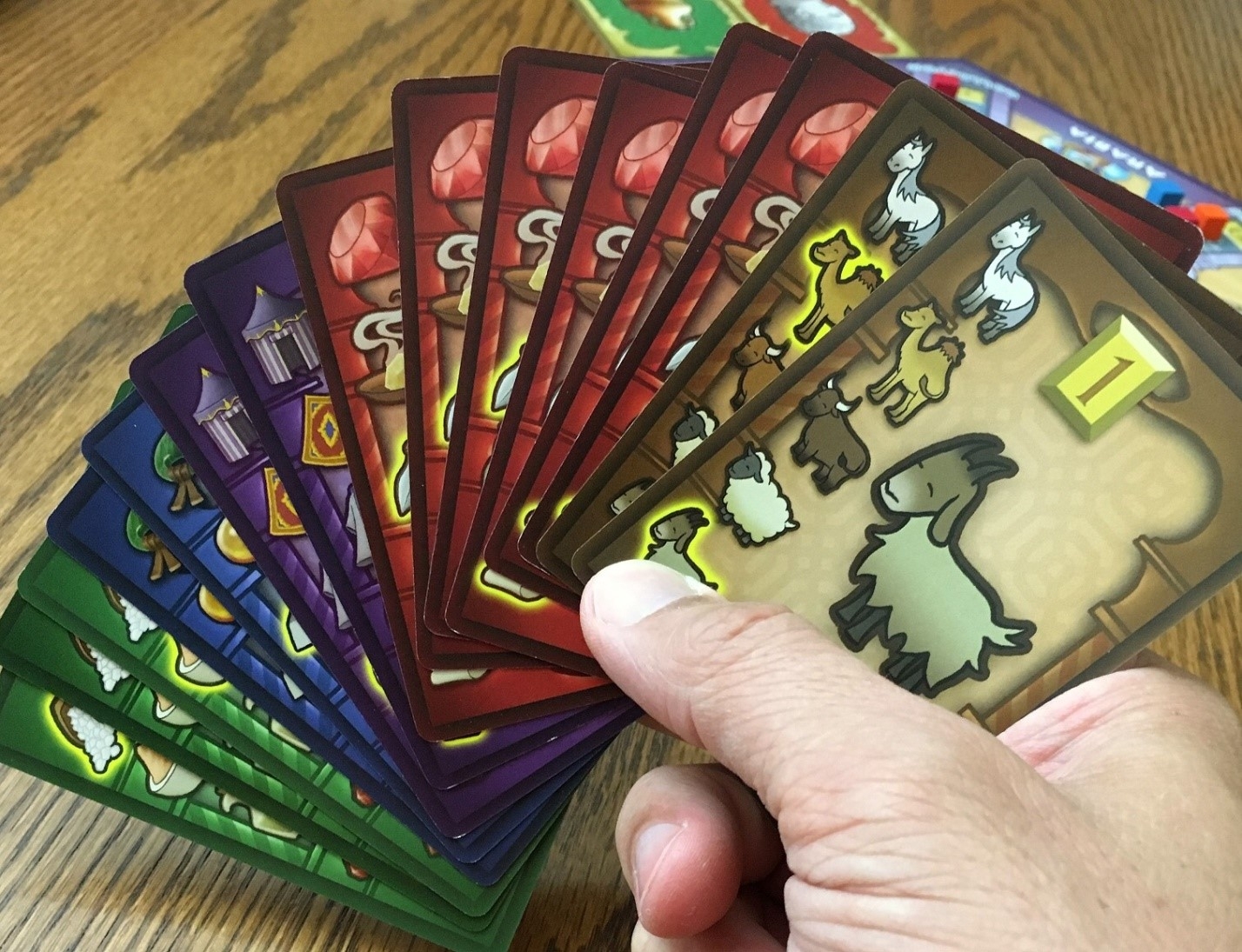 Hafidâ€™s Grand Bazaar feels very much like a family game and works fine in that setting. Its set collection goal is recognizable and intuitive. The bidding is handled with introductory simplicity, while retaining the mechanismâ€™s attractive interaction. Then there is the trading, which isnâ€™t any more accessible here. Like all negotiating games, it depends entirely on the players. With the right group â€“ and maybe even some creative metagaming â€“ the haggling phase could potentially shine and make the set collecting more fun, without having to rely solely on luck of the draw. If that vibe fits you and your gamers, Hafidâ€™s tent could be rocking.