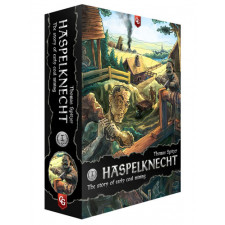 Who wouldnâ€™t want to play a game about early coal mining in the Ruhr Valley in Germany? OK, so the setting maybe isnâ€™t as exciting as space combat or secret assassins. But the game itself is rather phenomenal. Not only does it provide a meaty Euro experience, but it does so in a compact play time that really makes the game something special.

Each player begins with a player board featuring a â€œpinge.â€ Itâ€™s basically an area where coal is so near the surface that all you need is a guy with a shovel to dig it up. As the game progresses, youâ€™ll eventually empty the pinge and need to go to a mine shaft to dig up more coal.

The action selection mechanism is really interesting. Rather than take actions directly, you select from among a bunch of colored discs. The discs come in black, brown, and yellow and can then be placed on your board to gather food, cut wood, mine coal, or get rid of excess pit water that has accumulated. Each round, these discs refill randomly.

Players start with a farmer and a farmhand. The two can dig coal, but they arenâ€™t particularly good at it. You also get a specialized coal digger who is much better (but more costly) and eventually youâ€™ll get a miner and a haspelknecht. The eponymous haspelknecht is the person who reels up the coal from the bottom of the mineshaft after it has been dug.

Perhaps most interesting, Haspelknecht provides a semi-randomized tech tree. Your farmer can build developments that give you special powers, end game points, or sometimes both. Of course, they can be pretty expensive, so building a new development often means you wonâ€™t be digging any coal that round.

Each game year, you can do actions three times and then there is an intermediate scoring. After the third year, there is a final scoring. Youâ€™ll get points for coal youâ€™ve dug from the mine, left over coins, and any bonuses from developments.

Haspelknecht provides a great experience for those looking for a Euro style game. The interaction is indirect (you canâ€™t raid someone elseâ€™s coal mine, for instance), but it can be brutal. Some of the action choices mean that you will also take pit water. Too much pit water and you wonâ€™t be able to dig or haul coal. So by taking the right discs, you can stymie your opponent or force them to get more water.

The game also has a perfect ending. It has just enough turns to make every choice a tough one. You can hunker down and focus everything on digging coal. If you dig everything out, you can get a huge windfall of points. But that also means avoiding developments and likely taking debt. Alternatively, you can focus more on developments for points. But too much focus there means not enough time in the coalmine and a loss of end-game and intermediate points.

The result is that you have to craft a careful balance. There simply arenâ€™t enough turns to do everything you want to. Especially since you have to pay rent each game year or take debt. The game pulls you in several different directions and that tension is fun throughout. 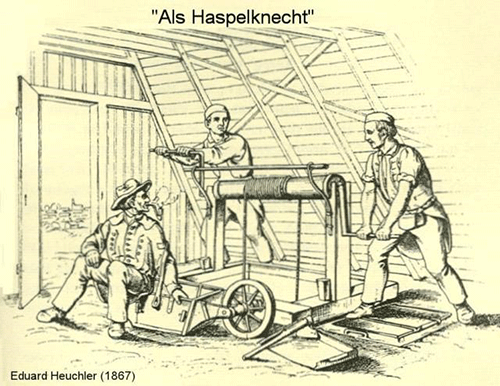 Looks like the makings of a great Eurogame right there.

Perhaps the best, and most unexpected, aspect of Haspelknecht is its play time. Action discs, pit water, differing rules for the pinge and shaft, heavy wooden pieces, individual player boards. It all seemed designed to be a two-hour long Euro, which I like. But it didnâ€™t take that long. It is about a 75 minute game. Thanks to simultaneous turn planning and only allowing players to take a maximum of two colors of discs, the game really speeds up.

That speed means that you can play a full, interesting, and engaging Eurogame in a short session. I donâ€™t think that a short game time is a good quality for its own sake. Iâ€™ll take a better game with a longer playtime nine times out of ten. But if I get a long game experience in a short game time, thatâ€™s the best of both worlds.

There is an exclusive club of titles that provide an engaging, meaty experience with a quick play time. Haspelknecht is its newest member. Set aside the theme that inspires drudgery. The game itself is a blast to play and belongs on any Eurogamerâ€™s shelf.