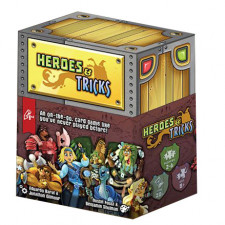 A characteristic I recurrently ponder in this hobby is mediocrity. Most games are fine. Good, even. They provide a pleasant, fun diversion and can be engaging. But the majority of games these days are unremarkable and largely forgotten by next year. Through variation of formula, some might offer a little something new. Yet the vast balance of titles are producing nothing in terms of the popular conception of innovative.

So I applaud designs that pitch a new mechanism in an effort to rise above mediocrity, as Heroes & Tricks attempts. It can be an uphill struggle. The number of new titles and expansions per year has risen from 1,250 in 2000, to over 4,000 in 2014. In the eight years of Kickstarterâ€™s existence the crowd-sourcing site has successfully funded an unimaginable 10,000 board games! To ride the waves of that cardboard sea requires something remarkably innovative. When a design tries, itâ€™s worth recognizing. Unfortunately it doesnâ€™t always work.

Heroes & Tricks is a trick-taking game. Its central conceit is its box. Cards are played directly into it, complete with magnetic flip top, and this formulates its signature twist on the genre: hidden card play. 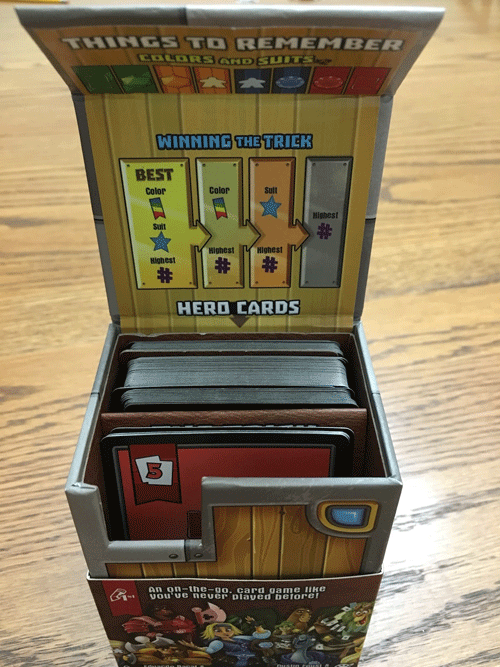 One thing is for sure, it is portable!

The 64-card playing deck is comprised of four different colors and four distinct suits (dice, meeples, cards and coins in charming homage). There are sixteen heroes, each evenly representing a color and a suit. Finally there are gear cards. The heroes are placed in the back behind a divider. After dealing a number of playing cards and gear to each player, the rest are discarded into the middle.

The player leading to a trick takes a hero from the back, secretly looks at it and places it in front of the box. He plays a card from his hand in front of that - and a gear card behind it, if heâ€™d like. Gear alters cards, scoring and other basic rules. The lead then closes the lid and passes the box to the next player who privately looks at the front card. She must play a card and a gear if she wishes, in front of the previous playerâ€™s card and passes the box, and so on. Everyone plays their card based on the one immediately before them. The last one to do so pulls everything out and reveals the sequence.

While I appreciate the effort to shake up a centuries old mechanism, the problem is that hidden information, deduction and good old fashioned â€œtelephoneâ€ are woefully inappropriate elements in trick taking. The style injects card games with interesting decisions and savvy tactical play. While undeniably impacted by luck of the draw, player decisions are more critical within the genre than other traditional card games based on matching, set collection or vying. This is why trick taking games are far and away the most numerous and varied type of all classic categories. Heroes & Tricks eliminates those qualities. 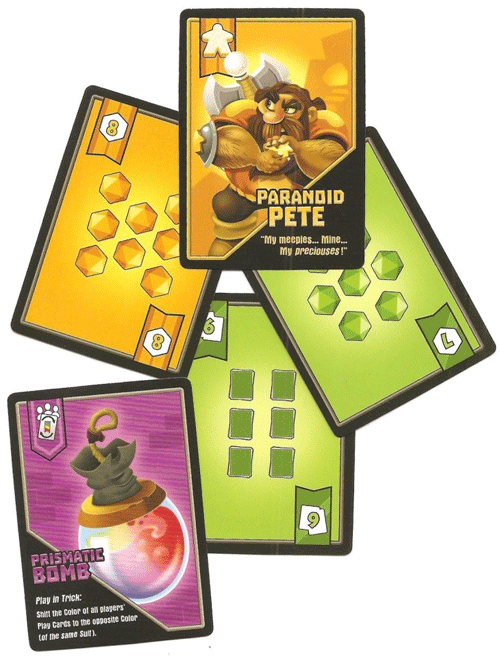 The foundation of any trick is capturing it with the highest card according to the gameâ€™s rules and/or particular lead. The odd quirk in Heroes & Tricks is that unless you lead, your only clue as to what will trump that round is the player immediately before you. If she is the lead, she could be partially or wholly misguiding you. Succeeding players literally have no clue.

Compounding that is the dearth of another trick taking hallmark - card counting. No hand uses the entire deck and no hand is entirely played out. So itâ€™s difficult to prepare for whatâ€™s still in circulation if you donâ€™t even know if itâ€™s in play to begin with. That removes significant strategy integral to the genre. These stalwarts are about committing high at just the right moment, sacrificing a valuable card for a bigger pay off later or sloughing trash when all else is lost. That sophistication is not applicable here.

It makes little difference what you play as you have no reliable information on which to base a decision, aside from the one card in front that youâ€™re privileged to observe. More than that, gear completely alters the parameters of particular tricks, adding more unknown to the mix.

There is an open play variant I recommend. The lead secretly looks at the hero card but plays it face down on the table, rather than to the box. Then he plays his lead card so that everyone can see it, as does each successive player. It still doesnâ€™t feel like trick taking, but it now becomes a much better bluffing and deduction game with a starting reference for the non-leads.

The box is a gimmick that adds nothing to the gameâ€™s premise - which is unfortunate as there are many titles adding worthwhile tweaks to trick taking. Dwarf King changes the goal of each trick with random contracts - which everyone is aware of before playing to. Diamonds introduces special abilities associated with suits for the winner of each trick - and those who couldnâ€™t follow suit. In Nyet! partners, trumps and points change every hand depending on what the players communally decide not to pursue. Heroes & Tricks works as a throw-away diversion and silly romp, with a fun enough reveal at the end of each trick. Alas thereâ€™s no strategy and few decisions that matter. Therefore, the trick is on the genre it upends to no good purpose.