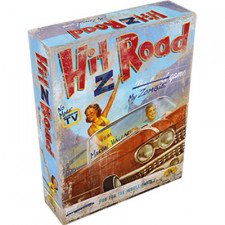 I had been watching this game for a couple of months and decided to pick it up on preorder because Iâ€™m a sucker for post-apocalyptic settings and themes of desperation in hard times. Well, it arrived a few weeks ago and I was astounded by the quality of the graphic design and artwork. The packaging and components are designed to look like a fictional game called â€œHit the Roadâ€, but it has been altered to â€œHit Z Roadâ€. This concept is so well done that I was actually fooled into looking for a component that doesnâ€™t even exist. Thereâ€™s a printed sheet inside the shrink-wrap on the back covering the back of the box, which I didnâ€™t look at, and so the back of the box is actually for â€œHit the Roadâ€, which depicts and lists parts that are fictional. My wife pointed out that the parts were missing and I was confounded until I realized what Asmodee had done. Itâ€™s convincing, innovative and original. 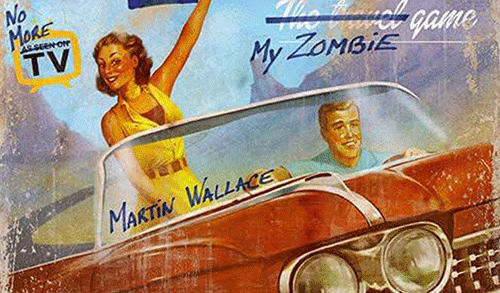 I canâ€™t say that I own any other games personally defaced by Martin Wallace.

Now, unfortunately, the gameâ€™s mechanical design doesnâ€™t match the graphic design in its brilliance; itâ€™s a substantially mediocre-to-almost-good luck-pushing and bidding game. Essentially, each round for the entire game consists of flipping up a tableau of cards in a four-by-two pattern of eight cards, then bidding on the player order, and finally, choosing one of the pairs of cards and resolving them. Each pair of cards gives you resources, of which there are three types plus survivor meeples, or takes them away, and may or may not force you to fight zombies. Zombie fighting is precarious at best because you get one chance to shoot at them without retribution, although it costs you bullets to do so. After that, itâ€™s up close and personal, and the odds of your people being used as zombie vittles is very high. You can mitigate this by using adrenaline tokens to ignore hits upon your little cadre of survivors, but those arenâ€™t exactly handed out like candies at Halloween, so by the middle of the game, your people are generally going to be dropping like flies. 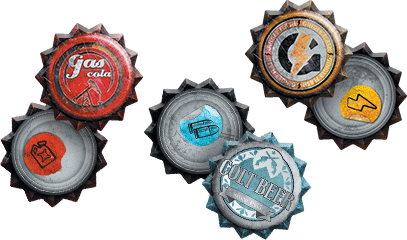 If you are a beer drinker, here are the worldâ€™s most easily upgraded components.

There is a good bit of tension, and you can always ignore cards by fleeing, although you donâ€™t gain resources or points when you do. That said, if you lose your last survivor, youâ€™re out of the game and are explicitly instructed to get a cup of coffee in this event. Iâ€™ve tasted the games wrath in this regard two of the three times Iâ€™ve played it, and it isnâ€™t as bad as it could be since the game is relatively short and your odds of being killed early are very low. That said, the game does overstay its welcome a bit. Itâ€™s about fifteen minutes longer than it should be, maybe more. Going through the three decks of encounter cards takes over an hour, even with only two players, and with four, itâ€™s closer to an hour and a half. For a game this truly simple, it really shouldâ€™ve capped out at 15 minutes per player or 30 for a solo game. 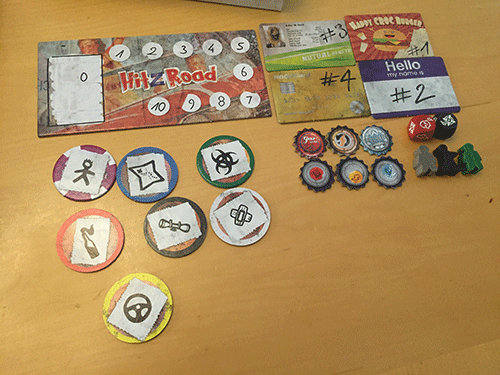 I think they were shooting for an â€œepic journeyâ€ vibe where you become invested in your group of survivors, but with no variable character powers, or even named characters for that matter, it boils down to generic groups of people that you donâ€™t really care about doing mostly repetitive things that you donâ€™t particularly care about. Donâ€™t get me wrong, itâ€™s not boring, and there are some really tense moments, but near the end of the game Iâ€™ve found myself growing weary of the repetitive, tedious parts. Iâ€™d call it a missed opportunity more than a failure. 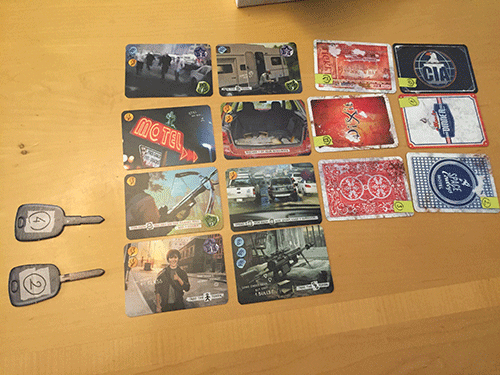 If youâ€™re looking for a light, tense game that doesnâ€™t require a lot of table space and that is very portable then this might be something youâ€™d be interested in along those lines. I was hoping for a bit more meat on the bones, which may have led to a bit of disappointment. But the graphic design and art choices are so incredible that I find myself overlooking the parts I donâ€™t care for that much just to see the box and bits again. 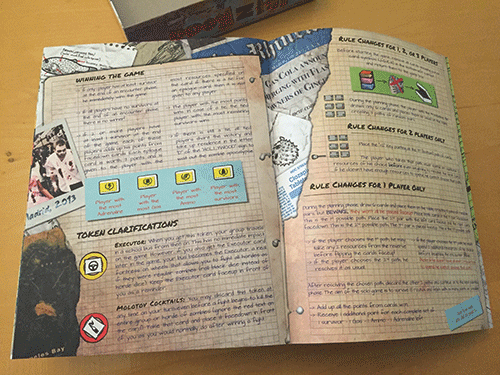 At the end of the day, even if I had played it prior to purchasing it, Iâ€™d have still bought it because my family likes it, the presentation is amazing, and itâ€™s fun enough to justify the very reasonable price. Iâ€™m even considering saving my beer bottle caps to paint or label and replace the very cool tokens it came with just to bump it up one more notch.