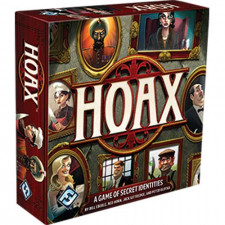 When a crooked businessman eats a cork (literally in this instance) and his life ends prematurely, what do you do? Lie, bicker, and claw until you've secured the fortune of course. Thus is the game of Hoax, a social deduction squabble of role obfuscation and manipulation as you try to lure your enemies into the trap while evading their own cloak and dagger dance.

Hoax was originally released in 1981 by the quartet of designers known as EON, who are better known for the seminal titles Cosmic Encounter, Dune and Borderlands. Like their more renowned designs, it was far ahead of its time and would come to influence a long line of imitators, including most prominently Coup and Mascarade. It nailed some key concepts and laid the foundation for a number of designers that would walk down the path it forged. Fortunately, the game's not just a footnote in the annals of this blooming genre as Fantasy Flight Games of all people has performed some tuck pointing and pulled this trailblazer up from its resting place six feet below.

Players are dealt one of seven character cards, each possessing a different special ability. On your turn you begin by claiming a role to perform its power. Usually this allows you to acquire one of the three resource types - Evidence, Prestige, and Money - which are spent to gain vital information during play. A player can call Hoax (or BS for you NSFW people) in which case discussion now begins at the table. The group collectively weighs in on whether the active player is lying and ultimately votes with a thumbs- up or thumbs-down on whether to call the shyster out.

If the majority sides with Hoax then the active player either admits to pulling your leg or they reveal their role and prove they were telling the truth - in which case they immediately win the game. No, you didn't read that wrong. In this regard, Coup comes off as a playground with helmets and pillows while Hoax is a minefield with razor wire and Byakhees flying over your head. Game is balls to the wall and loose as all get out.

If the unscrupulous individual was lying, however, they gain a suspicion token and can't claim the role they feigned for the rest of the game. After this phase the current player may spend one of each resource type and investigate another individual. The target takes their role out of a second deck of cards and combines it with three random roles as well before passing it over to the investigator. This process is clever and awards information to narrow down your selection without being too forthcoming. It's a bit flirtatious and reminds me of the strongest elements of Clue.

This investigation mechanic also requires the engagement of a player's memory in tracking this information. This will aggravate some, but for those who love the delicious knife ro-sham-bo of Mascarade you will have no problem.

The final action you can perform on your turn is to make an accusation and call someone out. You select a role from that second deck and pass it to the player you are accusing. If you are correct the target is eliminated and if you are at fault then you're extricated from the game. Brutal like the first time you delivered a head-shot in Quake.

Hoax relies on this constant tightrope of not wanting to get caught in a lie but also not wanting to be too honest throughout play. The conundrum lies in that you need to be called a liar when telling the truth to win, or you need to be the last person standing with everyone else eliminated. Different aspects of the game push you in opposite directions here which is what makes it most delicious. The depth arises in that you often want players to be duped and think you are lying when you aren't, while trusting you when they shouldn't. It's fantastic and silly like the most amazing moments in those other games clogging the genre.

Unfortunately the experience can be very uneven. The game offers immense freedom and places much of the burden of sustained enjoyment on the participants. It facilitates but it never protects or ensures you haven't wandered off the reservation. Depending on the mindset of the players you may see multiple games end before some even get a turn. I saw one such game end on the very first turn where my genius group decided to call out an individual who was doing his best Abe Lincoln impression. This is funny and worth a round of laughs, but it's also deflating if anyone at the table is counting on a meaningful and deeper deduction experience.

With this wobbly range of outcomes also comes a largely variable time-frame. Longer games can last around 20 minutes and it's possible, although unlikely, for a player to be eliminated early and have to sit around and watch. Hoax completely relies on a table maintaining its resiliency to the foibles of fate and will not fly with a group that needs a perfect experience in one or two plays.

It's very interesting to take a measured look at this game in comparison to those that followed. You can sort of directly follow Rikki Tahta's logic as he streamlined out some of the risky elements of this design and smoothed the experience. This does have the consequence of softening the drama and excitement of play as the stakes are lowered. Additionally, Coup suffers from a problematic end game that often devolves into counting of resources and mathing out who will have the credits to perform a Coup first. Hoax never falls into this pit of despair and always keeps the hair on the back of your neck stiff.

This is the type of game that can often be accompanied by extreme emotions. It's as love/hate as they come and it makes no effort to hide that fact. When Hoax is singing, the players are investigating like crazy and the tension builds to extreme. In these moments it can be extraordinary. Whether those memories of triumph will overshadow the blemishes is a difficult question that is determined by one’s tolerance. Regardless, Hoax is a fascinating achievement for all it has accomplished and the huge family tree it sprouted from the ground.