The real draw of wargames is that they allow you to experience a piece of history from a perspective unattainable by simply reading books or watching documentaries. They thrust you into the boots of a historical commander and let you experience the stresses and impossible choices thrown at him every hour of his command. In many ways, then, the success or failure of a wargame can be measured by the effectiveness of the design in presenting you with similar choices that that particular general or country as a whole would have faced.

And against this measuring stick, the Holdfast series of block games is a resounding success.

While the Holdfast games vary in the details of their design, they all â€œhold fastâ€ to the design trifecta of low rules overhead, low counter density, and a manageable play time. Theyâ€™re also all absolutely gorgeousâ€”very well-done productions that stand toe to toe with any block game out there today. Worthington has really kicked it up a notch in the production department, and these games are prettier than a brand-new Panzer rolling off the factory line. 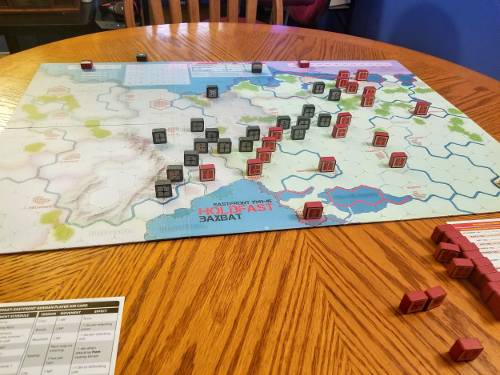 Of the latest batch of Holdfast games, EastFront is the shining star. It treads the familiar icy, muddy ground of Eastern Europe as Germany attempts an invasion during World War 2. All the staples of a good Eastern Front game are here: supply management, weather rules, and unit attrition. These chunks of shiny chrome coalesce into a beautiful, simple, elegant system that will see the German advance blitzing right over outmatched Soviet unitsâ€”until the winter hits and all hell breaks loose for Hitlerâ€™s blitzkrieg. What looked like a cakewalk quickly becomes a quagmire as the German player must decide whether to soldier on into the frigid east or take a breather for repairs, all while the game clock is ticking.

All this comes with just a few pages of rules that are easily grokked. The key to the elegance of the system is that your supply points are used to activate your blocks, repair your damaged units, and bring new units into play. This means the design is constantly putting you to the rack, drawing and quartering you in every direction until you scream. Itâ€™s brutal and brilliant, and the rules organically tend to simulate a semi-historical unfolding of the conflict. Youâ€™ll see sudden blitzes, stalled out and stranded Panzer divisions, heroic last stands: in short, everything that makes a wargame fun to play again and again.

EastFrontâ€™s two recently released siblings, Atlantic and Pacific, are a different animal entirely, but they still stick to the core series theme of easy-to-learn block wargames with low unit density. Theyâ€™re partly based on a pair of old naval games that eschewed a high level of detail and nuance in favor of a broad-brush approach to the naval conflict, but they bring the aging designs into the modern age with a gorgeous production. Players will send their cloaked ships out into the icy waters of the Atlantic or the island-dotted Pacific blue, attempting to bluff the other player with regards to the position of where the bulk of their fleet is. Once both sides are in position, battles are resolved on every space on the board, smoking hulks of metal limp home to the safety of their ports, and the side thatâ€™s left floating in every sea territory will be awarded victory points. Rinse off your destroyers and repeat until the game ends.

Some of the chrome here really works well. Germanyâ€™s U-boats are appropriately annoying, denying crucial victory points to the Allies by running silent and deep and preventing areas from being scored. And while the combat can become a dragged-out slog on occasion, launching planes from your aircraft carrier to send your opponentâ€™s devastating battleship crying home to mama before the battle even begins is just sweet enough to make the whole ordeal worth it. 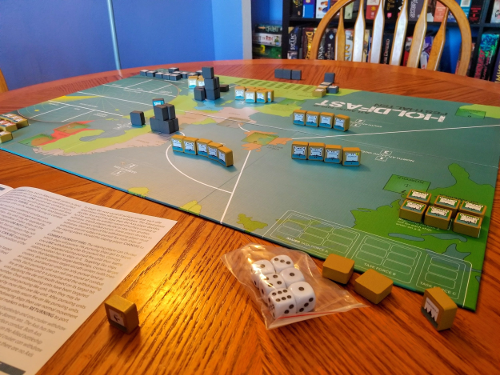 Looking for trouble in the great big Atlantic pond.

While I do recommend this pair of naval games, I donâ€™t do so quite as enthusiastically as with EastFront. They just require a little more work to manufacture the end result. Youâ€™ll carefully push out ships, wait while your opponent does the same, then resolve a LOT of battles, hoping you roll well. Then youâ€™ll send ships back to port and do it all over again. The naval versions of Holdfast just donâ€™t have that exciting narrative of a good wargame, since you never make advances or really gain any ground permanently. So the narrative arc isnâ€™t there, and it can start to feel repetitious as the rounds go on.

Iâ€™ll admit that the naval war, especially in the Atlantic, isnâ€™t the most exciting part of World War 2 to begin with, so there wasnâ€™t as much material for the designers to work with here. But even if battleships, carriers, convoys, and U-boats are right up your alley, you may not find the granularity that many naval wargamers expect in these kinds of games. Itâ€™s almost more of a bluffing and dice rolling game with a light dusting of World War 2 theme over the top than it is a historical exploration of the conflict.

That said, the naval games are still a ton of fun and well worth the time of anyone on the hunt for a light block game. Just be aware what youâ€™re getting here, and donâ€™t go in expecting the kind of high-seas strategizing and granular naval combat you might be used to. And ultimately, no matter which Holdfast game appeals to you the most, youâ€™re guaranteed a great time. The Holdfast series is the entry-level wargamerâ€™s dream come true.