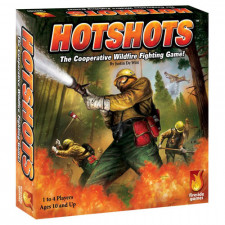 Hotshots, designed by Justin De Witt and produced by Fireside Games, is a delightful cooperative game in which one to four players assume the role of a hotshot crew, an elite group of wildfire suppression specialists. Youâ€™ll race to extinguish the flames before too much of the board is scorched to nothing more than barren ash.

Relating to real life hotshot crews, each of the four unique firefighters has their own special ability. The Sawyer, for instance, is better at fighting fires in more densely wooded areas, while the Crew Boss is able to assist other team members with movement. Effectively leveraging each of these abilities will be critical as the fire grows and changes, blown about by a fickle wind. 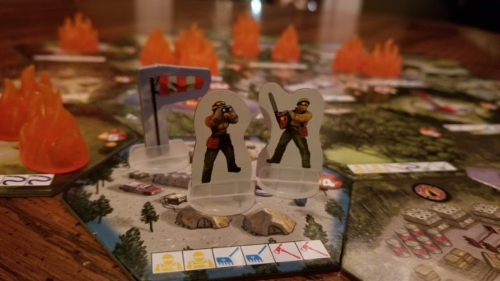 The board itself is composed of hex tiles randomly placed in the configuration of your choice. The rule book recommends a familiar five by five circular pattern for your first game, but includes alternative patterns meant to approximate the topography of actual United States national parks for future plays.

Each tile is unique, including vital information on how many fires can be placed on the tile before it gets scorched (spreading the fire and inching the players towards defeat), the recipe for fighting fire, and any additional rules. Although each tile is fundamentally similar, your strategy will require a game specific approach dependent upon the configuration of tiles and layout of the board.

To fight the fire and determine success, youâ€™ll roll six custom dice with a push your luck mechanic. The more symbols (fire hose, chainsaw, shovel, etc.) on the tile you can match on the dice, the more successful your firefighting effort and better the reward. As long as you match one, you can keep rolling; however, firefighting is never without risk. Failure to match any symbols causes the fire to grow.

Like other perfect information coops, Hotshots can fall victim to the quarterbacking problem, where one person is calling the plays on each players turn. While it is still incumbent upon the group to make sure one overzealous player doesnâ€™t ruin everyoneâ€™s experience, Hotshots somewhat mitigates the issue with the die rolls. While one player may encourage you to move to specific tile, the outcome remains in your hands. It may be nonsensical, but with your hand stinging from an epic high after a clutch roll, it feels like your accomplishment.

Speaking of which, a sense of accomplishment is exactly what Iâ€™m looking for in a successful cooperative game. Iâ€™m pleased to report Hotshots packs it, but it may make you work for it. I donâ€™t mean the game is too challenging. In fact, I found it to be the opposite. I won my first four games without breaking a sweat, playing first with a four player group and then several solo games. Although I was enjoying the gameplay, this made me concerned about Hotshotâ€™s longevity.

Fortunately, I tried some of provided alternate rules in the back of the rule book to make the game more difficult before giving up. Starting with an additional starting fire, I was able to find my sweet spot playing solo. Suddenly was losing as often as I won, making the wins much more satisfying as a result.

I wish Hotshots had a few extra tiles so that you didnâ€™t see every tile every game. A few additional characters would have been a nice addition as well, for even more variety. And while I love that Hotshots suggests ways to customize difficulty, I think it would be more accessible if more structured, by including easy, medium, and hard rule sets, rather than asking players to tinker around with them on their own. Regardless, when I step back and look at the game as a whole, it mostly works. Seeing as most of my gripes about the game are call for more content, that is pretty good place to be.

Ultimately, Hotshots manages to strike just the right notes in providing variety of experience without weighing the game down with needless complexity. As it stands, Hotshots is a fine gateway to the board game hobby for the uninitiated where even hardened, veteran gamers can find value in repeated plays.