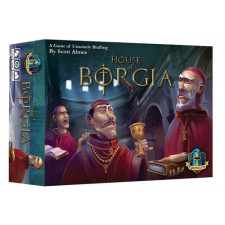 Games generate replay appeal in three main ways: being true to a theme, inventing a new mechanic or putting a new twist on an old one. Talon Strike Gamesâ€™ House of Borgia utilizes the third way, putting Liarâ€™s Poker into a quick, tense, dice-filled war in the shadows of St. Peterâ€™s, allowing two to six players (despite what it says on the box cover) to bluff, bribe and poison their way to the papacy for their puppet cardinal.

The six papal candidates are arranged on the board, and each player is dealt a card showing their puppet, the cardinal who needs to have the most influence at the end of the game for them to be victorious, provided their foes havenâ€™t correctly guessed who theyâ€™re backing. Next they roll dice to get an idea of their available actions, keeping them hidden as well. Each die face has a symbol corresponding to an action, as well as a â€œwild cardâ€, and astute players must guess how many of each kind have been rolled as they begin playing liarâ€™s dice, declaring a number and an action.

â€œTwo bribesâ€ might be your starting play, and if the player to your left believes there are at least two dice among all players that show a bribe symbol, they let you take your action. If not, your bluff is called, all dice are revealed and whoever guessed wrong loses one of their dice. Influence is granted to the top cardinals, and the action starts anew with more secret rolling. 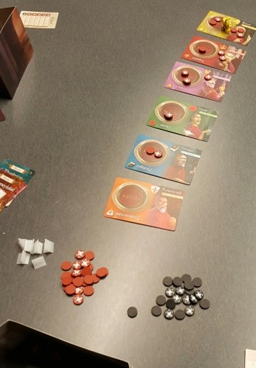 Bribes, poison and judgment. Still more appealing than 6am mass

This mechanic creates tension, forcing players to guess whatâ€™s out there, knowing if they donâ€™t call an opponentâ€™s bluff, their next action has to be at least one higher than the last bid, and that eventually probability will ruin their plans. Each call brings the game closer to its end, running players out of dice, lessening future options and making the influence count for their cardinal more meaningful each turn.

Your puppet is the most influential? Protect him by focusing opponentsâ€™ attention elsewhere. Moving influence off of rival cardinals helps, but also makes them more aware of whoâ€™s being favored, leading to the spreading of a game-ending rumor.

One action involves accusing a player of backing a specific candidate, and if the correct rumorâ€™s in front of you when the game ends, it doesnâ€™t matter how many influence your puppet has. You lose. This feels pretty harsh, since thereâ€™s no way to move a rumor away from you, and in a low-player count game, this can be devastating, especially if itâ€™s delivered by chance. A lucky guess is all it takes for an opponent to end your game. In the age of Euros and catch-up mechanisms, this is somewhat of a throwback mechanic, so it wonâ€™t be welcomed at all game tables.

I think the harshness of it fits perfectly. Getting your puppet correctly guessed may have been chance, or it may have been the result of you tipping your hand, and players with a fatal rumor in front of them must now walk the tightrope of seeming to support someone else to convince rival players they guessed wrong and move the rumor to someone else without removing so much influence from your puppet cardinal it costs you the game. As in liarâ€™s poker, and possibly the actual College of Cardinals, you play the other people at the table, not the cards in your hand. Optional rules lessen the impact of being correctly guessed at the end, which may satisfy those who arenâ€™t comfortable with wild swings of fate, but it also lessens the danger, breaking the spirit of the game. 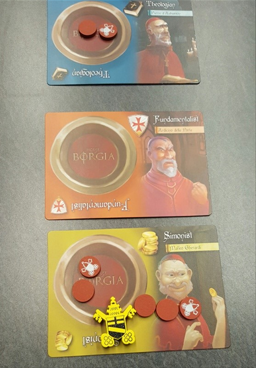 Does he have the anti-pope marker to block additional influence, or its removal?

What may not fit well is the lower end of player count. A special rule allows for more variance in two-player games, but the dice rein it back in, since each player knows what half of them are. Games can feel closer because influence is more spread around, but it also brings a sense of lessening player agency, since the piling of influence will just bring a fatal rumor, and with only two players, a correct guess is very hard to shed. Adding to this dilemma is the standard game rule that only the cardinal with the most influence is elected pope, so itâ€™s possible all players lose, bringing a swirling crescendo of deviousness to a bland anti-climax.

House of Borgiaâ€™s cutthroat nature increases with player count, resulting in actions benefitting or punishing more than one cardinal at a time and clouding your rivalsâ€™ schemes. This is where the game truly shines, forcing gameplay in line with its theme, old-school deception and shocking twists at the end. Packing a lot of drama into a tiny package and lunch-hour play time, House of Borgia delivers a contest worthy of its namesake.