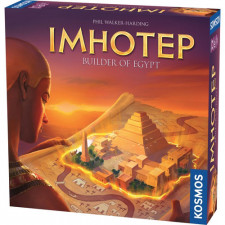 Imhotep is a game about building monuments in Egypt, but that doesnâ€™t really matter because itâ€™s a completely tacked-on theme. In terms of game play, building monuments just means that youâ€™re trying to send your stone to various locations to get you points in different ways. You choose one of the four available actions on your turn: 1) get more cubes; 2) put a cube on one of the available ships; 3) sail a ship to a location; or 4) use an action card, which usually entails you getting to do a more powerful variation of the other three actions. Locations give you cards or ways to score points, either immediately, at the end of the round, or at the end of the game. (For some variability, each location has an A and B side, which score slightly differently from one another.) After six rounds, you total everything up and rejoice in having built some very funky looking temples and burial chambers. Thatâ€™s it. Thereâ€™s not much else to the game. 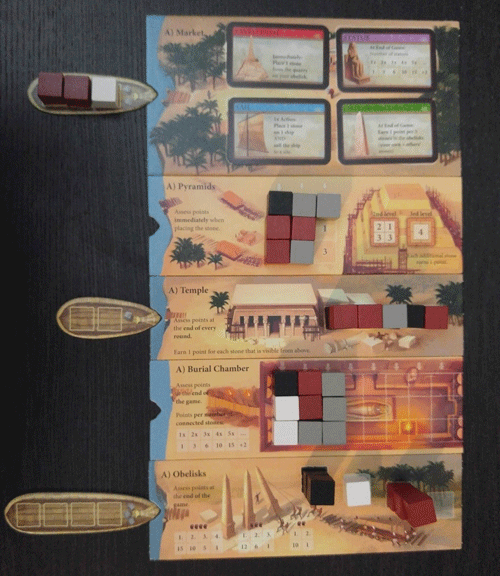 Congratulations, you helped build the worldâ€™s most wall-like temple ever.

The game is easy-to-learn, approachable, and plays well within its posted 40-minute timeframe. Given this, itâ€™s no wonder it was nominated for the 2016 Spiel des Jahres. Most games nominated for this are considered family friendly due to their simple rulesets and relatively short playtimes. For example, the 2004 winner Ticket to Ride is the exact kind of innovative, enjoyable, and aesthetically pleasing game that the SdJ committee has stated they look for.

On the surface, Imhotep sounds great. I have a certain appreciation for games that elegantly let me choose from a few actions in which interesting, tactical and/or strategic play comes out of the combinations of my own and othersâ€™ limited choices. However, outside its simplicity, Imhotep results in none of those interesting interactions or timing aspects that I hoped for. The game produces an experience that is fairly random, which is bizarre given that the game has no random elements in it (unless you count the shuffled deck of market cards). At first, Imhotep gives the impression that you have meaningful decisions to make, such as where to place your stone in a ship (front, middle, or back) and when to set sail, but those decisions arenâ€™t nearly as important as players would like to believe since you end up having little control over where your stones end up. Sure, sometimes your stones go right where you hoped. This may be by your own doing or othersâ€™. And yes, sometimes you can choose the perfect boat position, knowing where the other guy is going to send it. But that is far more reliant on happenstance than it is on being crafty. Players seem to unenthusiastically react to what happened on the previous turn instead of cunningly positioning themselves for a big score. Itâ€™s like throwing a bunch of dice in a cup and hoping for a Yahtzee on the first roll. At least in that scenario there is some drama leading up to the tossing of the dice and excitedly looking examining the outcome. Imhotep lacks an arc or any real tension to make it a compelling choice over the many other games of its weight and length that are out there. 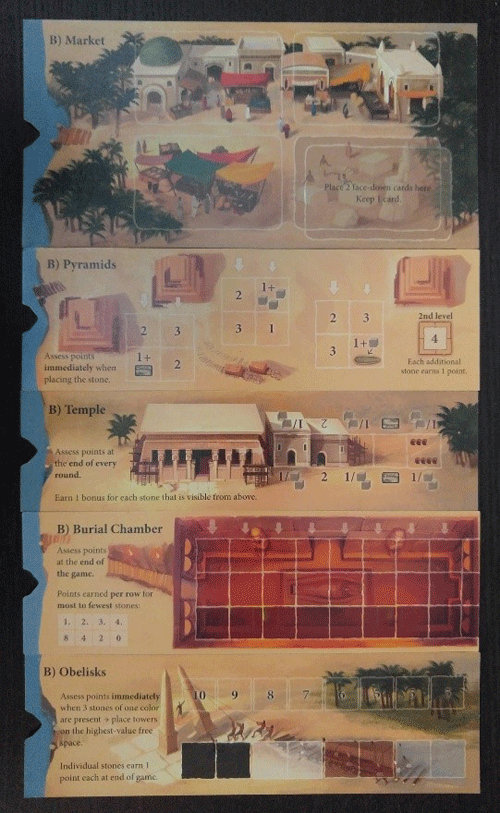 Just like some albums, the B-side is actually a bit better.

As for the player interactions in Imhotep, I can only describe them as odd. In many family-friendly games, there is a focus on building something up or a goal that youâ€™re working toward. Imhotep, however, lends itself more toward hindering others from getting points than toward maximizing your own score. Sometimes this means that there is outright intentional screwage, such as using your turn to send a ship with someone elseâ€™s stones to an undesirable location, even with no benefit to you. This is fine in more complex, strategic games where stepping on each other is an important part of playing and there are plenty of other decisions to help you climb out of that hole. However, it seems out of place in a family game, especially when I think of playing it with kids.

A game of Imhotep is akin to ordering a decaf, nonfat, sugar-free vanilla latte â€“ or, what I like to call a â€œWhy bother?â€. Sure, I guess youâ€™re getting the taste of coffee, but all the good parts are stripped out, so whatâ€™s the point? Yes, Imhotep plays smoothly, is completely non-offensive, and absolutely doesnâ€™t outstay its welcome. In fact, you are interested in what others are doing on their turns and are fully engaged despite how little control you have in the outcomes. If Iâ€™m being honest, Iâ€™ve been more bored playing games that I love than I have with Imhotep. But still, I keep coming back to the same conclusion: why bother? 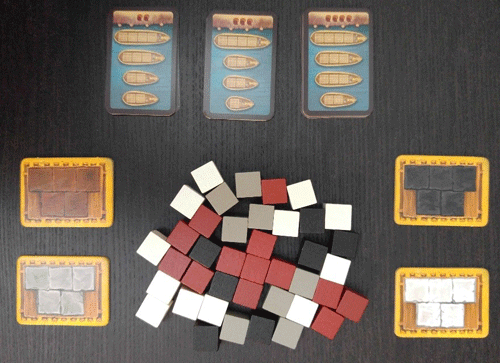 This game sponsored by sepia tone.

In the end, Iâ€™m not sure who Imhotep is for. It is certainly not for the more serious gamer and, as I mentioned above, the somewhat spiteful nature of sailing ships just to deny someone a spot they really want seems a bit mean for a family game. Its short play time, fantastic oversized cubes, and light weight are its best features. Unfortunately, none of those things are reasons to play, which sucks because I really wanted to like this. Still, I canâ€™t say Iâ€™m upset it lost the SdJ (especially to the very-deserving Codenames) as it truly does not live up to the excellence in game design that the award represents.