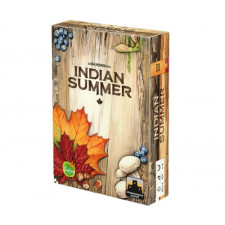 With its beautiful fall colored pieces, Indian Summer is practically bursting with the smell of autumn when you open the box. Bright green, yellow, and red tiles leaves spill onto the table in combinations of 3-, 4-, and 5-square shapes. There are various configurations of Lâ€™s and Tâ€™s and wonky-ziggy-zaggy-whateverâ€™s. The goal of the game is easy enough to guess: be the first player to cover your forest floor with the mosaic of tiles laid out in front of you. What seems like a simple task quickly loses its appeal as youâ€™re confronted more with frustration than fun. 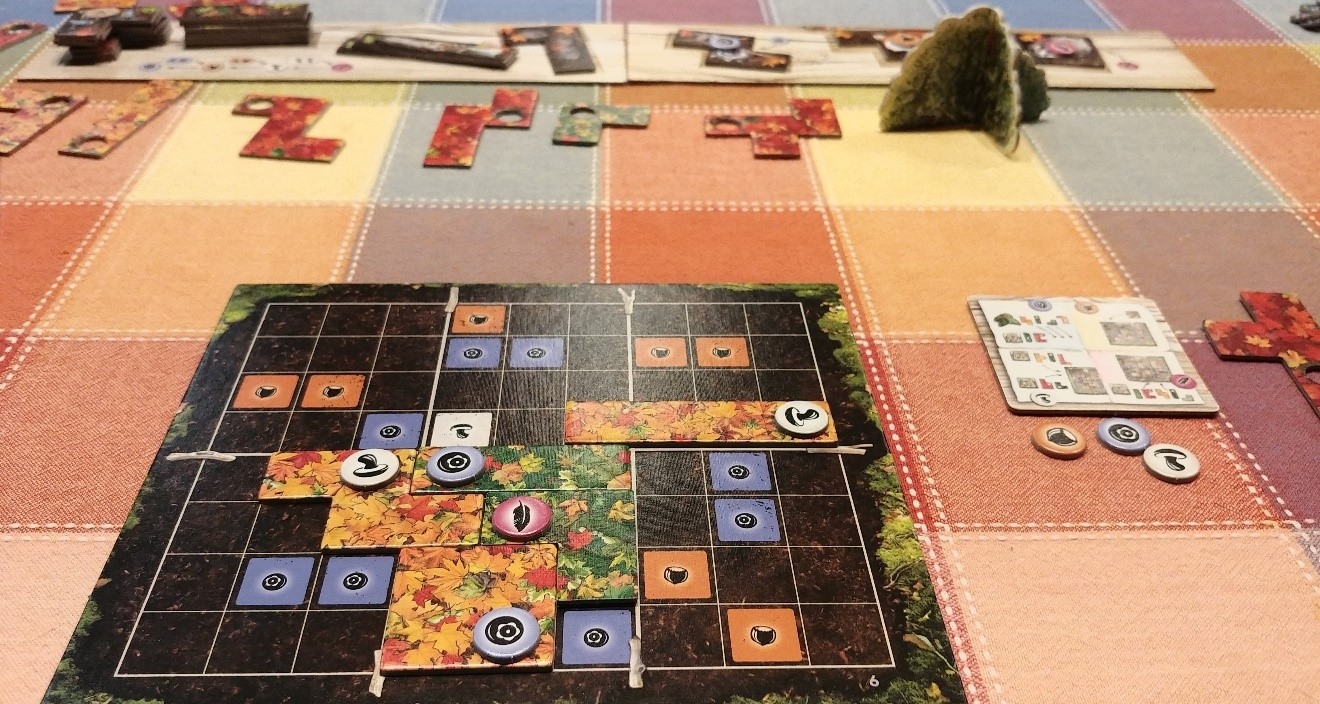 From turn one you are awash with decisions, due to the openness of the board. You take the front-most tile behind your backpack and place it anywhere. You can cover up the printed treasures, but putting the hole over it may earn you the corresponding token later. Smaller tiles are easier to squeeze into place while larger ones offer a distinct advantage in the amount of area they cover. Itâ€™s up to you as to the most optimal location and rotation. Planning out your placements several turns ahead is very obviously the key to doing well given that the order of your tiles is fixed. As the game progresses and your board closes in, players whose leafy tiles plop out in better configurations than others will have an easier time filling their board. For the less polyomino blessed, youâ€™ll have to rely more on the gifts that mother nature gave you to compensate.

Berries, nuts, mushrooms, and feathers are gathered when one of the six 3x4 areas on your board is covered. Hoarding tokens is pointless as the game is a race to fill your board first, but you need to be judicious when you use them too. Berries are the least exciting among the forest treasures as they simply let you refill your tiles before your line is empty. These refills still have to follow the order they came in, so hopefully you like that line up or have planned that far in advance. However, even the most cunning plans will require you to fill in awkward empty spaces, which is where nuts come in. You can always choose to place a 1x1 squirrel instead of your next tile, however nuts let you do this in addition to your normal tile placement. Itâ€™s clear that Indian Summer wants you to do neat little combos like this, but itâ€™s often hard due to the lack of flexibility in picking which tile to place.

Your polyomino path of destiny.

One way to deal with the troublesome order of your tiles is to use feathers. These highly coveted plumes let you place any two of your tiles on the board instead of just the front-most one. You can imagine how useful this is, which is why itâ€™s only going to happen a few times in a game. And mushroomsâ€¦ well, letâ€™s just say you canâ€™t guarantee what kind of trip youâ€™re going to have. By spending a mushroom, you can take the next tile from two different players. Having your tile yanked from you is irritating, except when itâ€™s not. More times than not, others stealing your tiles has more to do with fitting it to their own board than messing up your plans. Still, this unpleasant interruption in an otherwise multiplayer solitaire game doesnâ€™t feel great and it forces you to reanalyze everything youâ€™ve been thinking on for the past round. On the flipside, your opponent may have just done you a huge favor by taking out a piece that was going to absolutely ruin your board, especially in the late game.

I should mention that you can trade in pairs of treasures for one of a higher value. For example, two berries can be traded in for a nut. Or, you can pull a feather out of two mushrooms, which can be immensely helpful when your next tile ceases to fit on the board. You can even get more tokens if you were clever enough to play the spatial game within the spatial game, matching up the holes on the tiles in the shape one of the special animal tiles. Your combo engine will eventually sputter out though and force you to play squirrels every turn until the game ends. On the one hand, you should have planned better. On the other hand, maybe you just couldnâ€™t. 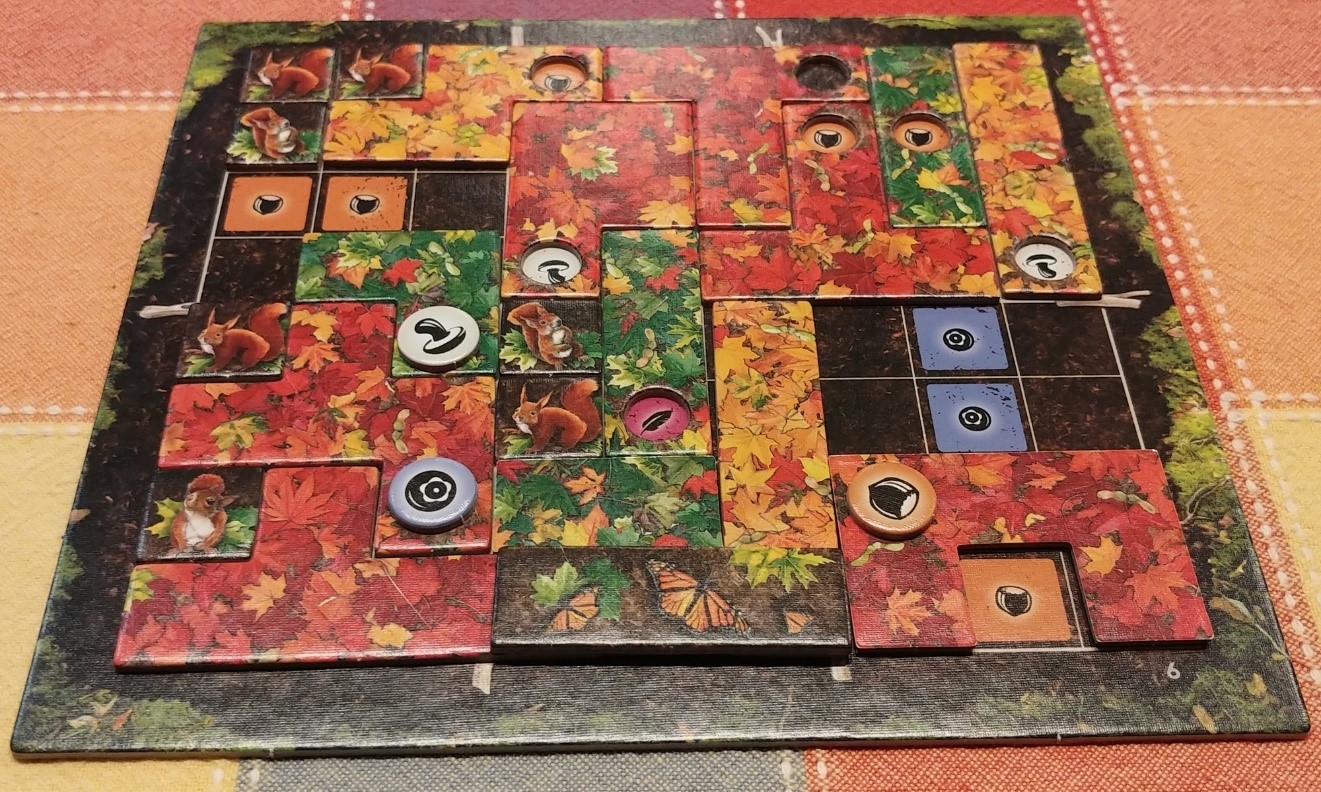 There seems to be a squirrel infestation in my forest.

Those with superior spatial planning skills will excel at the game, delighting in its challenge. For the rest of us, Indian Summer taunts you as you struggle to get everything on your board. This frustration is worsened when playing with opponents of differing skill levels. I actually prefer the solo game, which is brutal in its 10-round timer, but gives you the ability to mull over your options for as long or short as youâ€™d like without bogging down the game for others. The core of the game is the same though, which means those niggling annoyances are still present. As such, Indian Summer is very much a game for a select audience, and itâ€™s not one Iâ€™m part of.