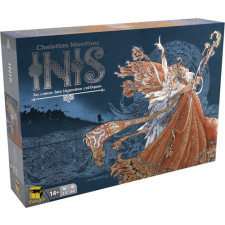 My appreciation for Irish culture goes about as deep as green beer and correctly pronouncing Erin Go Bragh-although this wanes after consuming said green beer. That did not deter me from rushing the proverbial door and clamoring for this new Matagot title. This is the third in the historical myth series that also includes stone cold classics Cyclades and Kemet.

The story here is that this is another area control game in a crowded genre, yet it manages to stand atop a moss covered rock and wave its long-sword with gusto. Players control Celtic tribes and are attempting to be named King of a newly discovered isle. You will rely on brinksmanship and thoughtful play to establish your position. Every inch of this Gaelic war poem lives up to the quality and presence of its peers.

The core mechanism is drafting as players choose cards from passed hands before proceeding to the action. The first comparison people will want to make is Blood Rage, but this trades out dramatic surprises for thoughtful strategy.

The draft here is clever and novel. Each player starts with four cards and chooses one, passing the rest to a neighbor. You now take the three you were passed, add the card you drafted to this group, and select two. This continues and is extremely interesting because it facilitates snatching combos and adjusting your hand in the middle of the process. It's a small trick but it's a good one. 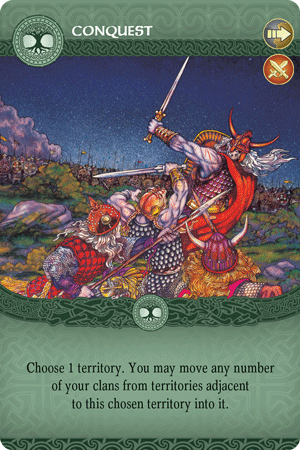 Artwork so beautiful youâ€™ll get lost in it.

Unlike similar designs, you may only perform actions from the cards you drafted. That means you can't move, attack, or recruit new drunk Irish dudes unless you drafted an appropriate card. The action cards are returned to the deck each round and you will draft from the same selection turn after turn. The strategy here is anticipating what your opponents are capable of and attempting to assemble strategic momentum from a set collection of options.

From a distance this sounds stagnant compared to Blood Rage or other drafting games that ramp up the significance of the card pool as time goes on. Inis establishes its drama and uncertainty through additional sets of cards that augment the main action deck.

The map is randomly generated and pretty confined at the start of play. Each territory present has an accompanying region card that is unique. Whoever controls the area by having the most clans (warrior pieces) is awarded the corresponding card at the beginning of the round. These actions tend to be thematic, such as allowing you to traverse the mountain region without casualties, or push across the plains and spread out. This simple element of control an area to unlock more options is a significant drop in the strategy pool of the game and should always be weighed in assessing your direction. Itâ€™s amplified by the fact that the map grows during play with new random areas added. This is insanely cool and a huge asset of the game.

The third type of card are Epic Tales. These correspond to Celtic myths, and afford options that tend to be quite powerful. They are acquired through basic action cards and are drawn from a random face-down deck. Opponents will have no idea what possible options you have and how you can inflict pain or extend your influence. It's an interesting contrast to the certainty of the action deck and is interwoven nicely into the dynamics of the system. The fact that they integrate the setting more tightly to play is also very intelligently done and should be commended.

These Epic Tales form a parallelism with Cycladesâ€™ and Kemet's monsters. Inis does not include large beasts, but establishes a similar dramatic effect through these Celtic myths. This feeds into the deeper personality of the game and is another touchstone of its identity.

Victory is another area where the design develops character. There are three possible victory conditions and players can qualify for more than one. These include: have clans in six different areas, control six enemy clans in a single area, and be present in areas containing a total of six sanctuaries. Sanctuaries are plastic buildings that are placed on the map through an action card and primarily used for this victory condition.

Controlling six clans means you are the leader of an area (having the most buzzed ruffians in the space) and opponents have a total of six figures between them in the same area. So a really huge congested region that people were likely vying for. 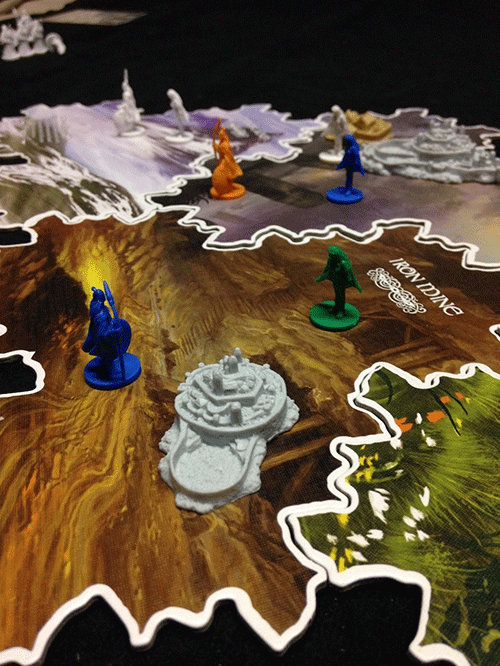 Victory is checked at the end of each round. If you have accomplished the most conditions then you simply win. However, if tied with another player then play continues. There's further nuance in that the title of Brenn is a tie breaker which you can acquire by controlling the capital region pre-seeded on the map.

This deep and fluid victory system feeds into the seething element of negotiation woven throughout the design. Combat is a tit-for-tat trading of attrition with no dice rolls, but can be completely ignored if all parties agree to peace. Thereâ€™s a hateful tone in the background where you can pull out clever plays or burn it all down in spite. This all works in tandem to produce a card-fueled area control affair with a very dynamic ecosystem.

That word dynamic is significant and apropos to discussing Inis. You can't win by being stagnant or hunkering down. Accomplishing victory is about flowing into areas of significance and conciliating trepid water. Interaction and movement are key concepts integral to the experience and fed by the melding of a very strong structural base. The theme at the heart of the game is migration. You need to drift. You need to move.