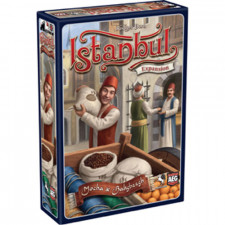 Most expansions tweak things here or there, add another player, or toss in some new components. While nice, itâ€™s much rarer for an expansion to fundamentally improve the base game. But Mocha and Baksheesh does just that.

The expansion adds four new locations, extending the playing area to a 5 x 4 grid. And, of course, it also introduces coffee and the coffee merchant. This new resource is gained from a supply in the traditional manner and isnâ€™t carted around in your wheelbarrow. It can be used to buy gems at the Coffee House or can be taken to the Tavern to utilize one of its special abilities.

Rather than merely a third way to get gems, coffee can also purchase special ability tiles. Those tiles allow up to four spaces of movement as long as you go in a straight line, or can make interaction with the governor, smuggler, or coffee merchant free. While both are nifty little bonuses, what they really do is expand the playing area. More of the board becomes worthwhile. The movement might allow you to hit a particular space at an opportune time that would otherwise have been foreclosed to you. And the interaction ability makes any space with a cylinder a valid destination. These little incentives result in players finding new paths toward old goals. Even a space as mundane as the post office becomes pretty interesting if I can get a free bonus card, good of my choice, or coffee while Iâ€™m there.

But those special ability tiles arenâ€™t the only option at the Tavern. You can also spend coffee to play down a blockade between two market locations. No other player may cross the blockade by any means. So, if someone is racing you to a market or about to get their last gem, you can drop the blockade down and cost them precious turns. The blockade adds just the right amount of interaction to Istanbul. It can stymie a player and cause them some annoyance, but it doesnâ€™t follow them around and continue to harass them. An ongoing â€œtake thatâ€ ability would have been out of place in this title.

The Tavern also offers the titular baksheesh. By paying four coffee as well as three defined goods (the baksheesh), a player can take the bottom gem from either the gem dealer or the sultanâ€™s palace. This makes it a great way to snap up a gem if an opponent has just enough to pay for one legitimately. Plus, it allows someone with a smaller wheelbarrow, but a high interest in coffee, to secure gems and achieve victory.

There is also now a guildhall where special guildhall cards can be drawn. These include powerful new cards that allow you to grab back all your apprentices, get goods or coffee for free, or even make unique sales for coins. They take your entire turn to play them, but are often worth it. And sometimes failing to take a regular turn is even a benefit. It means you donâ€™t move away from a desired market stall and someone else may have to pay you lira.

Mocha and Baksheesh isnâ€™t a great expansion because it adds a third resource. Its value is in the way that third resource impacts the game. The base game is locked in a dichotomy between goods and money. Either can purchase gems, and there are several ways to exchange them. Players shift back and forth trying to out earn one another and grab the gems quickly which can give the experience a bit of a seesaw feel. This expansion is a complete upheaval of that paradigm.

The old way is still there. And Iâ€™ve successfully zipped between the large market and the gem dealer for a win. But now, a quick grab of coffee might snap up gems at the coffee house. And the baksheesh allows for a shallow strategy. You donâ€™t need a lot of money or a lot of goods. If you have a little bit of everything (including coffee) you can get gems â€“ and you can take them from the place your opponents were most interested in.

The result is that the decision space is greatly advanced. The expansion brings out entirely new engines toward victory without destroying what came before. It manages to make the entire board more interesting, not just the new tiles. It integrates well and feels like it always could have been there.

The richer experience also makes it far more interesting to experienced gamers. The base game, while enjoyable, definitely had a lighter feel to it. It was a quick race and then on to something else. Mocha and Baksheesh deepens the pool without substantially increasing the time. If you are at all a fan of the base game, then you absolutely need to try this expansion. The base game is entirely better for it.