Two-player abstract strategy games often get short shrift among hobby gamers. Maybe itâ€™s that they feel too much like the classic games we learned as children. Maybe itâ€™s that we simply cannot exist without pretending to be influence-acquiring nobles or sword swinging adventurers. But itâ€™s a shame because there are some excellent abstracts.

One of those is Kamisado. The board looks like a chessboard except that, instead of the squares alternating black and white, they are multi-colored. There are eight total colors plotted over the board. Each player also gets eight towers which are placed along their back row. Every tower corresponds to one of the eight colors.

The first player can move any of their eight pieces. They can move diagonally or orthogonally as far as they like. The color on which their piece stops indicates which piece the opponent must move. So if you end your move on a green square, I have to move my green piece. Wherever I end dictates what piece you will move next. And so on.

Pieces can only go forward, never backward. If, for some reason, a player is unable to move, then their opponent gets to go again. A player wins when they get one of their pieces to the other end of the board. The first player to do so adorns the piece with a dragon tooth. Those teeth can be a bit of a handicap, but the first player to reach a predetermined number of teeth is the winner of the match. 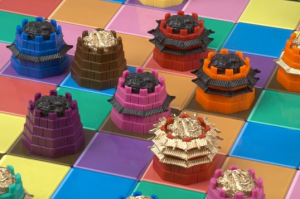 Kamisado is deceptively simple. You can explain the rules to someone in less than five minutes. The concepts are easy to understand and even a brand new player will feel like they have some grasp of it right from the outset. Of course, after a few moves, theyâ€™ll realize they are in way over their head.

But itâ€™s not just about your placement; itâ€™s about what your opponent will do. You get to determine which piece your opponent will move on his turn. So if his green piece could move in for the win, you want to make sure you donâ€™t end on a green spot. In that sense, itâ€™s important to think tactically. Where can you move that will give your opponent the least opportunity to advance? Your actions serve as an important way to keep him or her in check.

Because pieces only move forward, it is just a matter of time before someone is forced to give their opponent the win. And, thatâ€™s exactly what it feels like â€“ your move allowed your opponentâ€™s victory. In classic abstracts like Chess or Checkers, it can sometimes feel like you lost because you didnâ€™t see the guarding piece or failed to recognize a clever gambit. Not so in Kamisado. Here, you are fully aware of what is happening and, when you lose, you are often powerless to prevent it. And, itâ€™s actually an exhilarating feeling as the victor. You get the sense that you maneuvered your opponent into a corner and took advantage of his errors.

Best of all, when it comes to game length, Kamisado is unlike Chess or Go. A single round of Kamisado can be played in five or so minutes. A whole game takes less than forty-five minutes. This means that this is a perfect title for the lunch break with coworkers or for when you want a thinky game with a shorter time commitment.

Even though the basics of Kamisado are easily grasped, skill comes over time and is the deciding factor in victory. You need to think ahead. Not only that, but youâ€™ll need to think about the various opportunities youâ€™re giving to your opponent. At the start of a round, the decision tree is simply too big to realistically analyze every move. But as pieces clutter the center of the board, careful calculation can really pay off.

Kamisado is entirely abstract. So if you arenâ€™t a fan of the genre, this wonâ€™t change your mind. But if you are looking for a challenging two-player game with a short play time, then this is a great candidate.