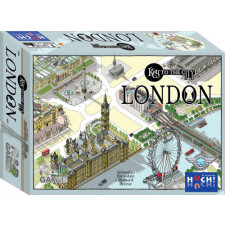 Key to the City: London Review

Like all fans of the Key series of games, I was looking forward to Key to the City: London. But what was interesting is that the newest title was not a wholly different experience, but promised to reuse central mechanisms from Keyflower and streamline play. The big question was, is the new title an improved version or a simple rehash?

Key to the City is played over four rounds. Each round, a series of tiles is put up for auction. Each player also gets a random assortment of meeples (termed keyples to keep with the key theme) in three different colors. But they arenâ€™t workers. Instead, the game treats them as currency and you use them to bid on or activate tiles. 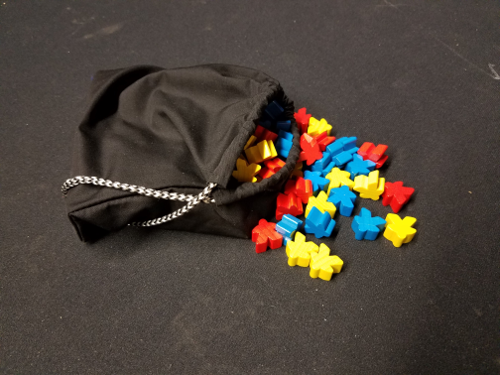 Once the tiles are displayed, you can bid on them using the keyples. The first bid can be any color of keyple, but after that the color is locked in. So if I bid on a tile using blue keyples, you have to outbid me using blue. In this way, there is a big advantage to going first because you can force bids on your preferred tiles in colors that you have. Conversely, if someone bids using yellow and you have no yellow, you wonâ€™t be getting that tile.

Of course, players can also activate tiles using their keyples. Many tiles will produce resources or skills that are needed for upgrades or points. While you can activate your own tiles, you can also use opponentsâ€™ or even ones that are up for bid and currently unowned. The only catch is that the owner of the tile gets to keep those keyples and use them the following round.

On their turn, a player can also declare himself done with the round by sailing down the Thames. The first to sail gets first pick of sailing spots. He might choose the one that allows him to go first the next round, the one that grants more keyples in income, or even the one that gets him a bonus river tile. So sailing first gets you first pick of the goodies â€“ but it also means youâ€™re done with the round. So if someone outbids you, you canâ€™t jump back in. There is a good push/pull tension between sailing early for a good bonus and sailing late in order to usurp other players.

The similarities to Keyflower are readily apparent. Key to the City utilizes the same brilliant auction mechanism. The multi-currency bidding structure is fantastic and forces players to move on wanted tiles early lest they be put into a bad color for them. But there are also some significant differences.

First, the â€œresourcesâ€ are simply different colored sticks that are placed connecting two tiles. All abilities key off of these connectors and grant points for various colors and chains. So you donâ€™t have resources like Gold or Wood and you certainly donâ€™t need to transport them around your board. Also absent is the coveted green keyple or any way to get more keyples during a round. Plus, all tiles in the final round are displayed from the beginning â€“ which allows the players to strategize more effectively.

The result is a game that makes amazing use of the best part of Keyflower while trimming off enough to give Key to the City about a 90 minute play time. You get a rich and deep experience in an accessible package that is easy to teach. 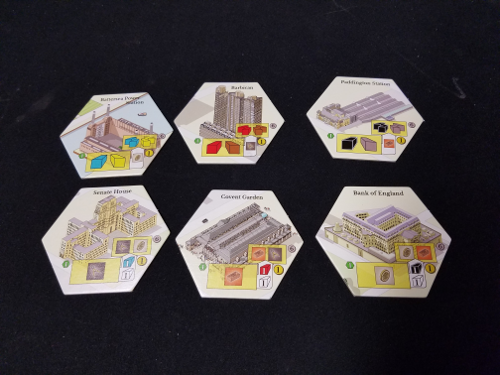 The builder of Paddington Station gets a free orange marmalade sandwich.

The question becomes, then, does Key to the City replace Keyflower? For some it may, but for me no. Key to the City is a rich game. The only reason some would call it â€œlighterâ€ is in comparison to its predecessor. In some ways, Key to the City feels like a base game with Keyflower incorporating a few expansions into the concept. Certainly, there is overlap. But I know I have players in my group who will avidly enjoy the (relatively) lighter game and others who want green keyples and added coplexity. It isnâ€™t too hard to justify holding both.

And if you have never played Keyflower, that is no hindrance. Key to the City is not some â€œdumbed downâ€ title or a mere sequel or expansion. It is fully its own game that has simply made further use of some of the most innovative and interesting mechanisms. If the other game looked a little too long or convoluted, then this title is your chance to experience the greatness in a far more reasonable time package.

Key to the City is an overall phenomenal experience. There is solid interaction and tough decisions all along the way. Replacing traditional resources with connectors makes the game conceptually simpler even while maintaining a deep strategic and spatial core. While it may not be a straight replacement, the reduced play time may get it played far more often than its predecessor. This title is an excellent one â€“ especially for those who like auctions and city building.