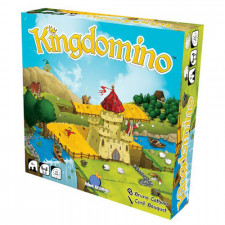 The Spiel des Jahres! Itâ€™s the Super Bowl of board gaming awards, without the $3 million commercials, or ripped dudes tackling each other in order to gain control of an egg-shaped ball. While that illustration may have gotten convoluted, Kingdomino is most certainly not. Itâ€™s a very straightforward, very simple game, one of the simplest the jury has ever selected as a prestigious SdJ winner.

When I say â€œsimple,â€ many of you gamers out there are reading that in a negative light, but I see simplicity as a virtue. And Kingdomino revels in its simplicity. Itâ€™s fully aware that its design is little more than a barebones set of rules for picking tiles and putting them together in the proper way to score lots of points. It does not pretend to be anything more, and it hits its target perfectly. You pick up tiles, you slap them in your kingdom, and if youâ€™ve put it all together right, youâ€™ll get some points at the end.

The key moment of any game of Kingdomino is when the holy grail of tiles is revealed, and you think, â€œThatâ€™s the one. If I get that tile, my kingdom will be showered in points, and beautiful women (or men) will flock to pay tribute to the greatness of my domain. Bards will one day write songs of the abundance of my fields and the conquests of my armies.â€ 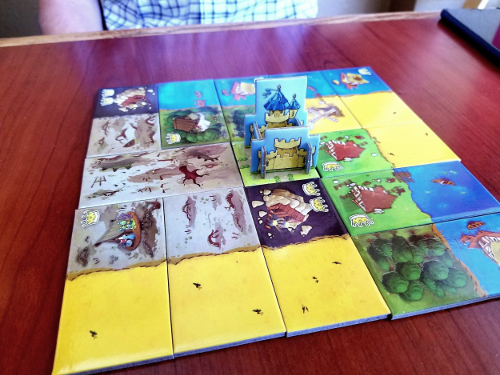 (Editor's note- Kyle had a caption here referencing Monty Python and the Holy Grail, which is expressly forbidden by our Editorial Guidelines and has been redacted. He has been sacked.)

And then, of course, like clockwork, the guy going in front of you picks up that tile instead. And youâ€™re faced with the question of whether to take a really bad tile in hopes of picking first next time, or a decent tile and having less selection next time. Kingdomino asks you to plan ahead as best you can, but it also forces you to make the best of what pops up.

While many games with these kinds of tactical decisions attempt to inject some kind of balance into the design, Kingdomino is not so concerned with making things perfectly even for all players each and every game. You can get truly hosed by the flop of the tiles or another playerâ€™s selection. You could build toward a particular strategy only to find the tiles you needed werenâ€™t even part of that particular sessionâ€™s tile pool, depending on the player count (some tiles are removed at random in the two and three player versions of the game).

But Kingdomino doesnâ€™t care. And you probably wonâ€™t either, because youâ€™ll be having a delightful time puzzling over where to put each domino into your little kingdom, and the game will be over in ten minutes and youâ€™ll be setting it up again. Itâ€™s a real delight to play. Decisions like choosing good tiles at the cost of turn order or vice versa are straightforward and meaningful, even if you get hosed by the winds of fate from time to time. Plus, youâ€™re constantly fighting with your own kingdomâ€™s design, trying to preserve opportunities within your meager allotted 5x5 space while capitalizing on the tile you just grabbed. 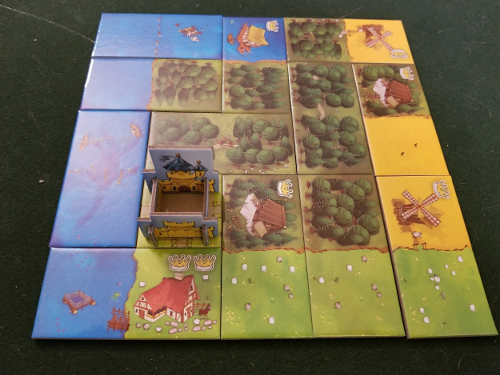 Everything the light touches is your kingdom, within the confines of this 5x5 grid.

The production contributes to the enjoyment factor considerably: glossy, thick, bright tiles, superfluous 3D castles, and hefty wooden king pawns all communicate that this is going to be something light, breezy, and rewarding. Awaiting the next tile draw in order to find out what the gameâ€™s going to reward you with hits all the right pleasure buttons for a game of this size and weight.

While Iâ€™m not much of an expansion addict, I think thereâ€™s at least as much opportunity for more expansions and additions here as there was with Carcassonne, 2001â€™s SdJ winner. I see no reason why Bruno Cathala shouldnâ€™t just absolutely flood the market with bite-sized packs of new tiles, goal cards, rule sets, and the like. Although the base game will come off as a little anemic to many gamers, with a healthy expansion schedule I would expect this one to have very long legs. So, ultimately, thereâ€™s not a ton of meat here, but what is here is so well done and polished that you just might not care. This SdJ winner wonâ€™t impact the gaming community in the same way that Dominion or Ticket to Ride did, but it will certainly make some headway in the family and non-gaming markets, which is exactly what the award was designed for.