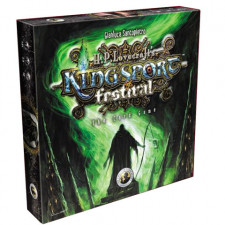 Some would say that good things come in small packages, but in the case of Passport Games Studiosâ€™ Kingsport Festival: The Card Game, I would argue that incredibly fun things come in small packages. Some games defy your ability to precisely identify where the source of the fun lies, and in the case of this game, itâ€™s exactly like that. Itâ€™s a simple game, very few rules, and is made of eleven dice and 80 cards, but somehow, it squeezes far more fun out of those than its big brother, the Kingsport remake, Kingsport Festival. Granted, you would likely not need to be a Lovecraft fiction super-fan, as I am, to enjoy this little gem, but it sure as hell doesnâ€™t hurt to be. 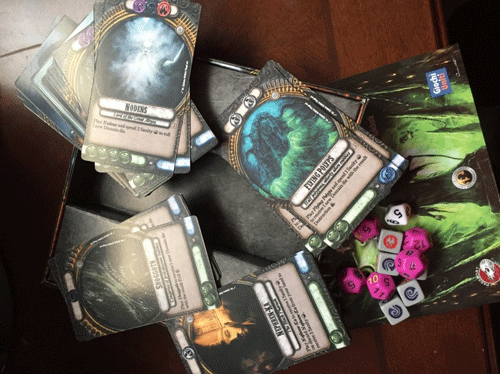 Review Corner Editor-in-Chief Michael Barnes, many moons ago, coined the term â€˜Fun First Designâ€™ to describe the kind of game that Kingsport Festival is. It is a design that has wholly embraced that tenet by letting the game organically walk you through the narrative without forcing it upon you. Games that get the hell out of the playersâ€™ way and let them build their own stories are the ones that create memorable sessions, and my family found that we were talking about our sessions long after the box had gone away. I cannot convey in words the level of surprise I found myself in after a few plays; itâ€™s not right that a sub-twenty dollar game should be more entertaining and requested as often as much more expensive games. To wit, not since Octo Dice has my family been so enthralled by a small box game.

Part of our joy in playing this game may have to do with the fact that youâ€™re not playing as some noble goodie two-shoes with this game. In Kingsport, youâ€™re not just playing the role of the â€˜bad guyâ€™; youâ€™re the â€˜bad guyâ€™ whoâ€™s trying to get the help of much worse guys to cause the end of the world. It would be like watching a James Bond movie, but from the perspective of SPECTRE, or so the analogy my daughter gave me goes. The mechanics boil down to a quite simple kind of deck-building, of sorts, in that youâ€™ve got several currencies to manage and the occasional unforeseen hiccup in your plans of world obliteration.

The lionâ€™s share of the game is found in spending currencies to purchase cards, which then have their own currency bonuses, spendable upon later turns. Itâ€™s not unlike one of my favorites from 2016, AEGâ€™s Mystic Vale, in that youâ€™re spending currency to buy more cards which you can then use for more currency. People have called that a â€œhand-building gameâ€ and this is probably not too far from the truth, but this is more random because your base currency is earned via the roll of some dice, among other things. This game also includes a timer, limiting how much you can do because of the nine-round hard limit. 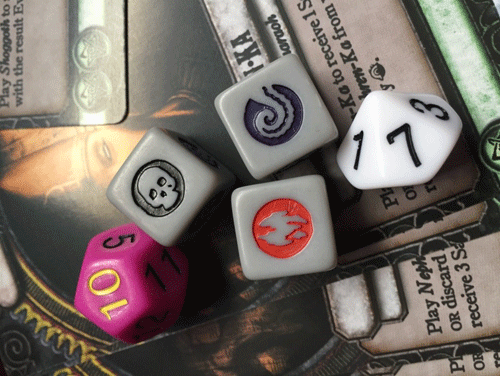 Beyond the simple buying and applying aspect of the game, thereâ€™s also these nasty little Lovecraftian investigators whose sole purpose is to screw your plans up. Each game, during setup, one of these 14 ignoble meddlersâ€™ cards are put into play, each with its own global rules and time table for when it must be battled. Itâ€™s more an annoyance to your character than a fatal interaction, but this little detail really helps emulate the setting, because it only happens roughly every third round, and it only really slows you down rather than causes you a fatal blow; the reality is that you simply lose some of a resource if you lose, or gain that same resource if you win, proportionate to how well you did.

If I have any single, overarching complaint about the game, itâ€™s that this is the worst Lovecraft-mused artwork Iâ€™ve seen in a board game. Itâ€™s muddy, oversaturated in blues and blacks, and just looks bad. Worse, even with the tarot-sized cards, the gameâ€™s fonts are smaller than they could be, especially with regard to the subtitle beneath the cardâ€™s label. Itâ€™s quite hard to reed, and honestly, it really sucks. Now, the important bits are fully legible and the graphic design of the card is mint, but the fugly illustrations absolutely detract from the gameâ€™s overall look quite a bit. All that in mind, the game still rocks my socks off and has me itching to invoke Elder Gods all night long.

If you like fast, light, resource management type games and donâ€™t mind the hand of fate controlling you to a degree, then this game may be for you. I can tell you with absolute certainty that for this price, the game totally entertains far above its price range. If the world ends, sorry; thatâ€™s my bad.