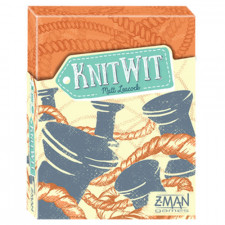 Given Matt Leacock’s pedigree I was a little surprised when Knit Wit was announced. It seemed strange and interesting that the designer of a popular game about 4 brutal diseases rampaging across the globe would design a game ostensibly about thread craft. When I found out it was a word game, and not a strategy game at all I was intrigued. Party games are a dime a dozen on Kickstarter these days, and Knit Wit was going to have to go toe-to-toe with the recent juggernaut Codenames. The good news is that Matt has stitched together something rather interesting and packaged it all together in a way that a good friend described as “Pinteresting”.

Knit Wit will no doubt be compared to the classic family game Scattergories, though that comparison may not be completely fair. Yes, they share the same base rule of only being able to score words or phrases you come up with that are unique to the table, but apart from that the games diverge. In Scattergories, there are only so many category lists and thus only so many ways you can up with an answer for “Things you Find in Hospital”. What sets Knit Wit apart, and makes it shine, is the way players weave these categories together themselves as part of the game.

Upon opening your gorgeous box, you’ll be greeted by eight smooth wooden spools wrapped in loops of bright color. These loops are attached to matching colored clothes pins and are the heart of the game. On your turn you’ll lay a loop on the table, around a single spool if there is already one out, and clip a sewing tag to the clothespin. There are 114 tags with words and phrases on them; everything from “blue” to “smaller than a breadbox” is printed on these tags and these replace the static categories in that other game. After you’ve added a tag to the word tapestry on the board, you will place a numbered spool in any empty space on the board created by these loops. These spaces are basically the intersection of a yarned Venn diagram and you and your opponents will be trying to come up with something (anything) that would fit in that intersection. This repeats, loop-clip-spool, around the table until all 8 spools have been placed on the board.

It’d be easy to rush through this part, thinking it part of the setup and not part of the game, but I urge you not to. As each string is added to the table looping and curling around a spool, you get to choose how difficult it will be to score. While it may be easy to come up with something both “Hollow” and “Bitter” for spool number 7, what happens when your friend loops a third string around it and clips the word “Mechanical” to it? Watching the table groan as you put spool 2 down in the space created by the “Invisible” and “Mushy” is as much fun as trying to come up with something yourself, and that’s where it gets tricky. Once the last spool is placed, players will pick up their white pencils and beautiful black chalkboard-esque craft paper and scramble to come up with something for each spool. “Illegal” will be easy, but you have to be careful not to pick something too easy. I thought for sure that the Model T would be unique to the “Historical” category but apparently so did 2 out of the other 3 people I was playing with. This part of the game is a scramble, as players race to trace the loops swirling around the board to ensure they catch all the categories. And they are also trying to finish early in order to grab the bonus points represented by chunky buttons. There is no external timer in Knit Wit; you only need to go faster than everyone else.

Once the last button has been taken and the remaining players have written their last word, players go around in a circle sharing, laughing, and being laughed at as they read their list. If there is a disagreement about whether or not “Jaded Robot Ex-Lover” should count for hollow, bitter, and mechanical, then anyone can yell “Knit Wit!” to give the player 10 seconds to convince the table before it’s put up for a vote. Depending on your group, this can be as contentious as a game of Cosmic Encounter as people argue passionately and horse-trade over future answers. Finally, you’ll add up points but at this point it’s almost an afterthought. There is no grand strategy to Knit Wit, only a beautiful shared experience you stitch together across a table.

From the moment you open the box to the moment you wind up the spools and pack it away, Knit Wit is a joyful experience masterfully woven together by a designer who knows fun in a purist sense. While it may be just a family word game, it’s one done by a creator with the hobby world design chops to elevate it. And as for why this seemingly simple game needed the wonderful packaging and components it comes with? Well, sometimes whimsy is reason enough.