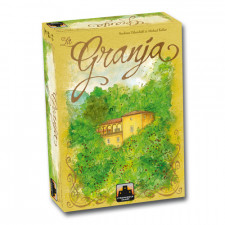 La Granja isnâ€™t exactly innovative, but it borrows from the best to create a wholly enjoyable experience. Resource conversion and delivery like a Rosenberg title. Feldian turn order and dice allocation. Plus Chudyk-style card decisions. Throw in a farming theme and personal player boards and you basically have the euro-est of euros.

As with all good games, players are acquiring, converting, and delivering resources in order to get the most victory points. Personal boards keep track of your goods and tiles. But the big decisions emanate from your cards. Each player starts with a hand of cards and each card can be played in one of four positions. On the left, they become fields that grow the olives, wheat, and grapes you want. On the right, they extend your farm and may offer income or space for pigs. On the top, they become market barrows which allow you to deliver goods and compete in the marketplace. On the bottom, they become helpers which provide you with a special ability.

Each turn, players gather their income and produce goods. Then dice are rolled which correspond to six different actions. In play order, you can take a die and do the associated action. One die remains at the end and all players get to do that action. Then, players secretly decide which donkey tile to play. Each tile has a number of donkeys (representing deliveries) and hats (representing turn order increases). Once the selection is made, turn order is rearranged and deliveries begin. After you deliver goods to your market barrows or to craft buildings, there is a scoring round. Then it all starts again for a total of six rounds.

OK, it might sound like Iâ€™ve just described the dullest, most boring game in existence. But that would be incorrect. La Granja is quite interesting and constantly forces you to reevaluate your plan to make use of new advantages. Even though you get points primarily from one activity â€“ completing market barrows â€“ yet the game provides a wide array of methods and strategies for accomplishing that objective. Sure, there are a few other ancillary point acquiring methods, but really itâ€™s a barrow game.

During play you can easily become distracted from your main point engine. Market barrows come from cards. But if you play one as a barrow, you canâ€™t use it as a field to get goods. Or extend your farm for income. Or even as a helper. And the helpers are fantastic! They let you take more coins, get bonus deliveries, reward you for earning pigs, or even allow specific resource conversions. They make your production and delivery game more nimble and efficient.

La Granja draws you in different directions each of which seems like it would be beneficial. If you spend all your time playing helpers, you might not have the goods needed to compete for points. If you use cards as fields, you may miss out on getting your actions done most efficiently. When it comes to playing cards, your choices are not only difficult and interesting, but also fraught with tension. And since every card has four ways to play it, itâ€™s easy to agonize over them.

Although the card play is really the heart of what makes La Granja great, it would be wrong to consider this a standard euro because of one interesting mechanic. In fact, it has a couple of interesting twists. The resetting turn order is great because you have to fight every turn to stay on top (and you will eventually lose). You never get into a situation where one player is so far ahead that the others donâ€™t compete on turn order and his primary position effectively becomes safe.

The die selection is also a wonderful element. You might want to take pigs as your action. But if the dice donâ€™t allow that action, you wonâ€™t be taking pigs. This means that while you can gear the start of your turn toward taking certain actions, you also have to plan for contingencies. Luckily there are multiple ways to get harvest goods or coins. But some actions appear only once. Plus, itâ€™s fantastic that the unused die allows everyone to take an action. This gives the last player in turn order, whom would ordinarily get the dregs no one else wanted, an interesting choice. When it is down to two dice, he basically gets to decide what everyone else will get to do.

With all of these neat little evolutions on the resource conversion game, La Granja is a wonderful experience. But it does have its drawbacks. First, the rules are quite clear on HOW to play, but not so clear on what you SHOULD do. This is a market barrow game. Thatâ€™s where the vast majority of points will come from. But the rules donâ€™t emphasize this and a first play can leave newcomers feeling a little at sea.

Also, while La Granja doesnâ€™t really induce AP, it doesnâ€™t reduce it either. So if you play with that guy â€“ you know who he is in your group â€“ that tends to make every game take just a bit longer as he calculates out the possibilities, it could easily push into the two hour range. Barring that, and with experienced players, it would normally be about a 90 minute game even with four seats filled.

La Granja takes a well worn genre and really enlivens it. While it has a ton of interesting twists, it is more an evolution in gaming than a revolution. Still, that puts it on top of the food chain. If farming themes and action efficiency excite you â€“ along with bountiful and difficult choices â€“ then this is a title you need to check out.